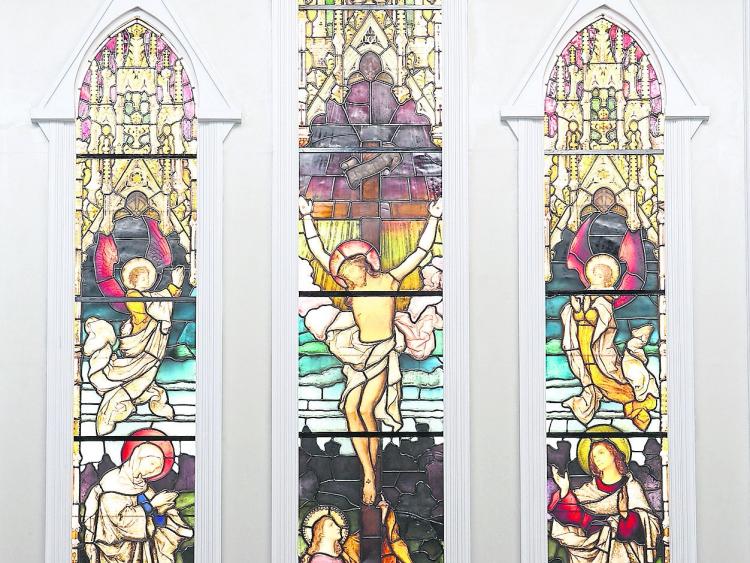 Over the past two years Fr Sean Mawn PP in Ballinamore investigated various ideas as to how he might enhance the ambience of the Parish Church to give it a more prayerful atmosphere.
This relatively modern Church was built 60 years ago and differed from the more traditional style of Church Architecture that is found throughout Ireland.
The Church is very tall and there was a huge simple wooden Cross above the Altar with a carved figure of The Crucified Christ secured to the wall.
This was fixed to a plain very high uninspiring cold marble recessed wall in the Sanctuary at the back of the original Altar constructed of reinforced steel poured concrete .
Various options were considered by the Church Committee and the preference was for a new stained glass window. However cutting openings in the mass reinforced concrete wall would be a very expensive job and could destabilise and weaken the building so this proposal had to be shelved and the Committee had to go back to the drawing board.
Fr Sean Mawn then contacted Ken Ryan at Abbey Stained Glass Studios in Dublin for advice and a meeting was arranged in Ballinamore to discuss possible alternatives.
Ken’s late father Frank Ryan was responsible for the design, manufacture and installation of all the stained glass windows in St Patrick's Church some sixty years earlier.
The design and manufacture of new stained glass windows for above the altar was a hugely expensive project as at least three tall windows would be required twenty feet high to compliment the architecture of the Church and naturally finances as is normal were in short supply.
Abbey Stained Glass Studios had recently taken out a very tall three light window depicting The Crucifixion for the Religious Sisters of Charity in St Vincent’s Convent, Cork City for use elsewhere.
These stained glass windows designed by Mayers of Munich circa 1880 were a perfect fit for Ballinamore and after due consideration by the Committee it was decided to follow up this possibility.
Ken approached the Sisters with the proposal of the windows being relocated to Ballinamore and the Religious Sisters of Charity generously agreed to gift them to the Parish naturally with some conditions of respect for these special religious works of art.
This gift to Fr Sean Mawn in Ballinamore made this project manageable financially, but of course the stained glass windows would have to be completely conserved and restored and in addition internal joinery, carpentry, decoration and electrical work would have to be undertaken in St Patrick's.
Farrell Gallagher was appointed to carry out the major internal timber partition to house the new stained glass windows with illuminated cabinets and Ken Ryan provided his drawings of similar illuminated cabinet projects as a guide for Farrell to follow. Farrell had about six weeks working on site and with the Covid 19 restrictions very little inconvenience was caused in St Patrick’s Church.
Recently, William Malone and the Team of stained glass craftsmen from Abbey Stained Glass Studios brought the huge restored three light Crucifixion window from Dublin and fitted it above the Altar into Farrell’s expertly and exactly constructed window openings.
The project was completed just in time for Confirmations in St Patrick’s much to the delight of the congregation and of course, Fr Sean Mawn PP.