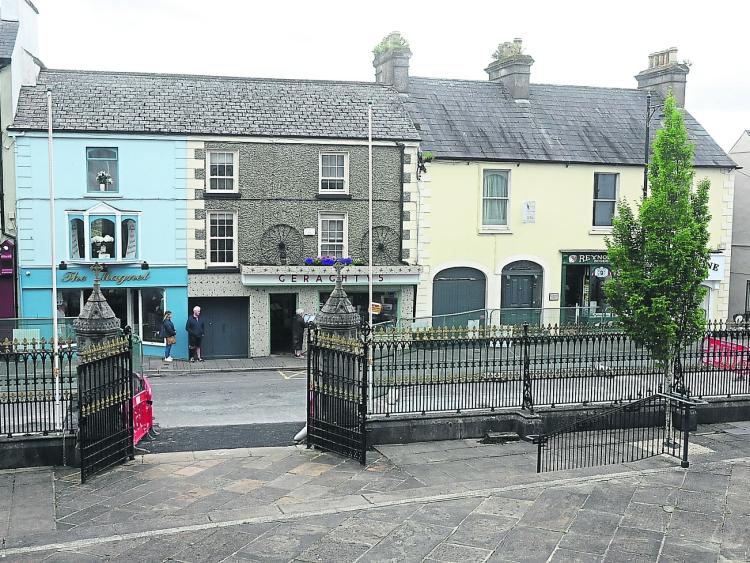 The area impacted by the proposed concept

Chief Executive, Lar Power, has told council members that it is his responsibility to ensure the future economic viability of this county and, "to that end I have to sweat every funding opportunity".
The comments came as Mr Power outlined the background to the development of a concept proposal to create a destination centre on Main Street, Carrick-on-Shannon.
The proposal has been the subject of controversy in recent months. Carrick-on-Shannon Municipal District members have expressed their concern over a lack of consultation on the proposal and one of the businesses set to be directly impacted by the proposed development, Geraghty's shop, has collected over 9,000 signatures in a petition against the development.
At the September Council meeting, attended by members of the Geraghty family, two motions were raised; one on procedure and one directly on plans for the concept proposal by Councillors Enda Stenson and Des Guckian, respectively.
Cllr Finola Armstrong-McGuire excused herself from discussion on both motions due to a conflict of interest in relation to the proposal.
Responding specifically to Cllr Guckian's motion at the meeting, Leitrim County Council Chief Executive, Lar Power stressed this “is, and still remains, a concept proposal”.
Mr Power said small towns in Ireland “are under pressure” and the objective was to create a destination just off the N4 which would attract people into the town centre.
Certain conditions such as the location on Main Street and access to a carpark suitable for buses was critical for the idea, said Mr Power, and this was why the current location was proposed.
He said that the idea for the project came directly from “my head, no one else's". He shared the concept with his colleagues and an architect was brought in to further develop the concept.
Mr Power said he had "no axe to grind" in relation to the project but he accepted there had been a “misunderstanding” and said the Council had “apologised for that”.
He said that the concept had been brought before the Town Team to see if they considered the proposal of value and to ask “if they were of a mind to support it and write a letter of support”.
He also contacted one of the affected parties who was “very surprised” to hear of the plan and had not been aware of it.
“I was very conscious that Mrs Geraghty was an older lady and I asked this party for advice. The landowner undertook to approach the Geraghty's,” he said.
This person, he said, later informed him that Mrs Geraghty was totally against the plan. Following correspondence from the Geraghty family and a phone call he organised to meet with them at which point they asked to pull the project and he explained he could not.
“It's just a concept design at the moment, if it gets approval for funding it will go to full design”, stressed Mr Power at Monday's Council meeting. He pointed out it would be the end of next year before planning will be a consideration and if granted it would be 2022 before any work could start.
He added: “I categorically answered their (Geraghtys) questions (when he visited their business) and I told them that everybody's rights are protected in the procedures and processes” which form the design and planning approval stages.