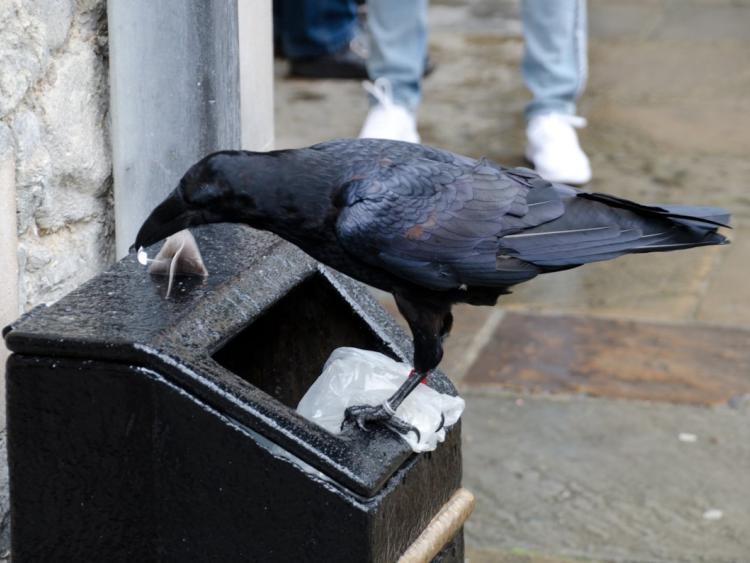 "It would appear that we have very smart crows around Mohill "

Public litter bins should be redesigned to eliminate cases of households illegally dumping waste in them and to also stop wildlife from removing rubbish and causing a mess.
Cllr Thomas Mulligan highlighted the problem of public litter bins at the September council meeting noting that the misuse of existing bins for domestic waste dumping and “the ability of wildlife, especially crows, to eject the contents onto the street, defeats the purpose for which (bins) were intended”.
His put forward a proposal that the Council create a countywide scheme to redesign the bins to prevent this type of abuse.
The Fine Gael councillor also urged the local authority to look at the provision of bins in the towns and villages as part of this redesign process.
“There is an obvious problem with the misuse of bins by people dumping household rubbish in them,” he said, “but in my town, Mohill, there is also a problem with crows.
“It would appear that we have very smart crows around Mohill who make a great job of it (emptying bins) over Saturday night and Sunday morning,” he noted to much laughter from the chamber.
“Could we include a provision for all public bins to be wildlife proof, crow proof and also make sure that there is a way of stopping people dumping their household rubbish in these bins.”
Cathaoirleach Cllr Mary Bohan, noted this wasn't just a problem in Mohill but is “something we are seeing countywide”.
“In my own village (Drumkeerin) Tidy Towns have put signs up saying that people can't put household waste in the bins, but it still happens,” she pointed out adding, “this isn't only affecting Mohill”.
Independent councillor, Enda Stenson, seconded Cllr Mulligan's motion and also paid tribute to the “huge work” carried out by the Fine Gael councillor and the volunteers in Mohill, in a bid to keep the town looking its best.
Cllr Mulligan's proposal is now being sent forward to the Environment, Climate Action and Agriculture Strategic Policy Committee for further consideration and recommendation.