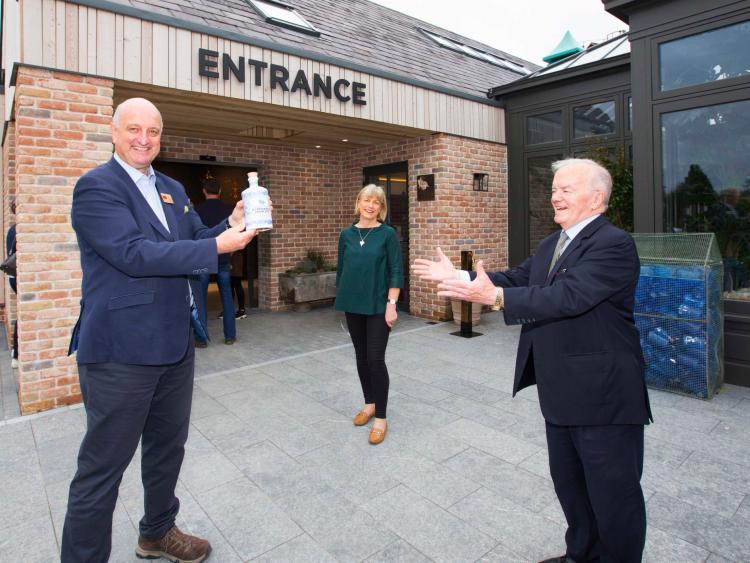 Noel McPartland was honoured as the first ever visitor to cross the threshold of the new €3m The Shed Distillery Visitor Experience last Thursday in Drumshanbo.

The Shed Distillery team formed a guard of honour for Noel and his wife Margaret, and owner Pat Rigney presented Noel with an exclusive ceramic commemorative bottle of Drumshanbo Gunpowder Irish Gin as a tribute to his fundamental role in making the experience a reality.

It was a landmark day not only for The Shed, but also for the town of Drumshanbo with the opening of what Noel described as “a game changer for the town.”

The Distillery and Visitor Experience is located on the site of the former Lairds Jam Factory which closed in 1998 resulting in the loss of 100 jobs.

The building lay idle for a number of years during which former Lairds employee Noel united the community to fight back. They formed a community council and after many years of lobbying secured a lease on the old building and transformed it into a community enterprise The Food Hub. 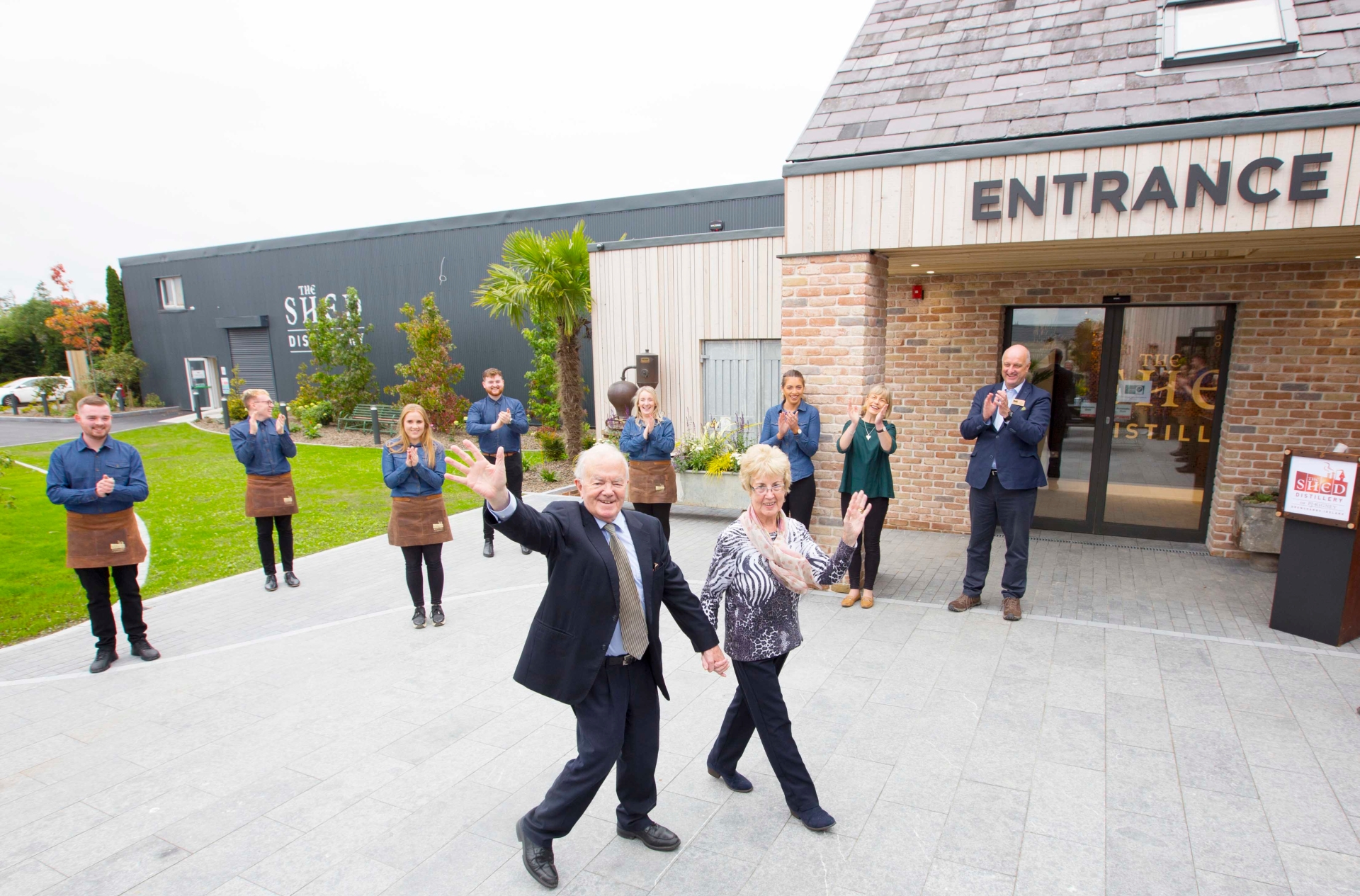 Noel and Margaret McPartland are welcomed to The Shed Visitor Experience by Pat and Denise Rigney and staff. Pictures: Brian Farrell

A clearly emotional Noel recalled the early days of The Food Hub in Drumshanbo in 2003, working with Sean Nolan and the late Jim McPadden, the growth of the various enterprises and then the arrival of Pat Rigney and his vision for the future.

“We never realised how big a project it was going to be. He came here, he liked the area, it fitted into his scheme of things and when you look around you here this morning, when you look at the detail they've gone into in every aspect of the place, it's amazing. It is a huge benefit for Drumshanbo. I would describe it as a game changer for the town,” he said.

The magnificent new visitor experience features a majestic botanical glass house, an extensive visitor journey into the epicentre of the authentic distillery, two separate tasting bars as well as a bright and spacious café and an exclusive distillery gift shop.

While the visitor centre was due to open last June, it was put on hold due to the Covid-19 pandemic which has had a devastating impact on overseas tourism.

However, owner Pat Rigney has now opened against the odds. He had planned to attract 30,000 visitors to the area by next year, with over 80% expected to come from overseas.

He said regardless of the current tourism climate, there was no question of delaying the opening.

“On paper it may look like the worst time to open, but delivering on our commitment to create jobs, especially now, was essential to our partnership with the community which is a cornerstone of the business. 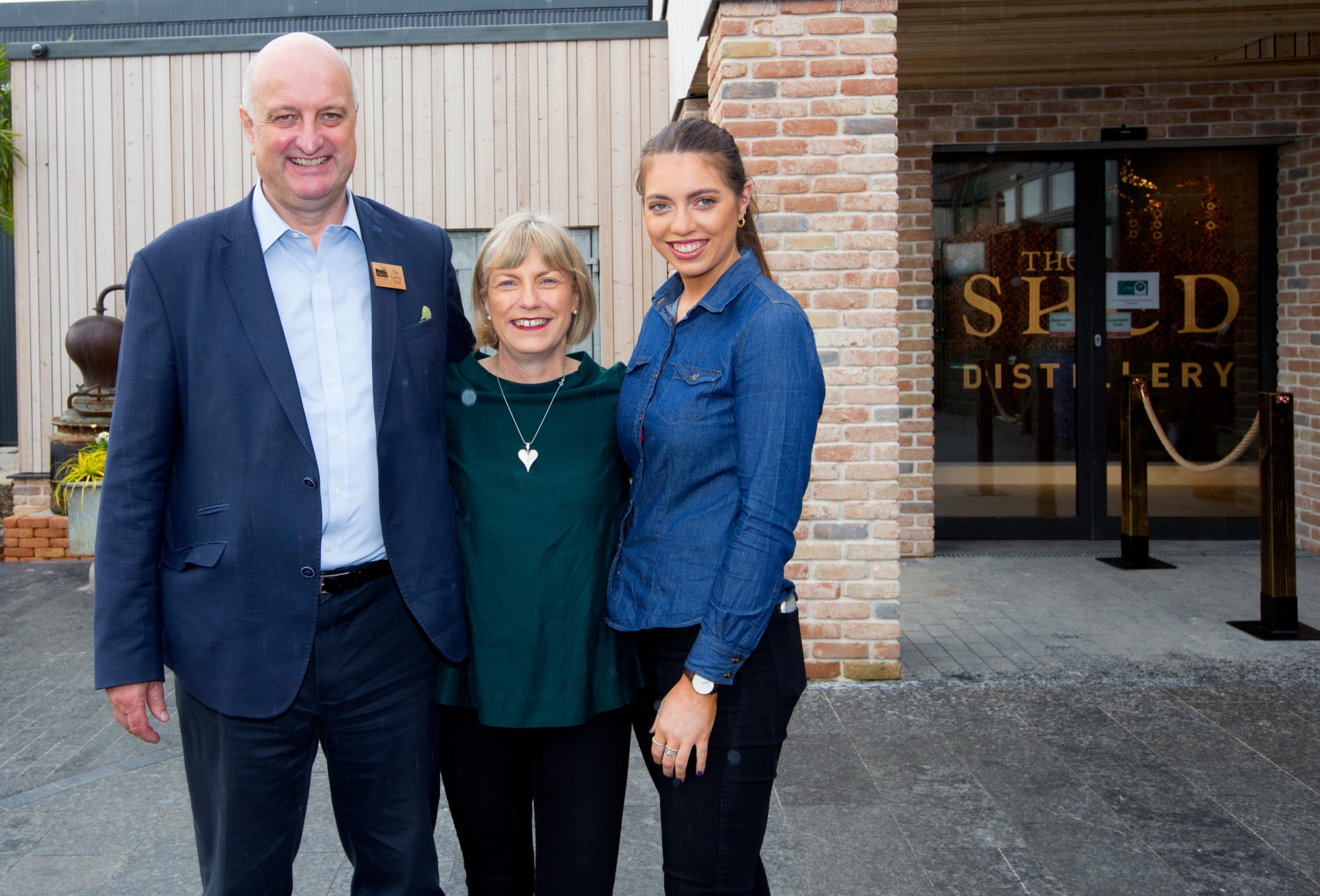 Pat and Denise Rigney with their daughter Roisin.

“This morning (Thursday) we were shown just how right it was to go ahead with today’s opening - local businesses and residents arrived to cheer us on, bringing cards, flowers, chocolates. It was very emotional for the whole team. Community partnerships like this are rare and we would not be where we are today without everything the community has done .”

Pat paid tribute to the huge effort by the team at The Shed, by the people of Drumshanbo, by the local craftsmen, and designer Enda McKiernan in Carrick-on- Shannon.

“I'm very excited and I certainly hope it will bring a lot of foot fall to The Shed Distillery but also to Drumshanbo and to Leitrim in general,” he said.

He also recognised the very professional team of people he has working with him.
“It's all about the people. I'm just one guy. I have a vision, obviously, but it's about the people coming together and making something really spectacular here,” he said.

“We started off with one employee, now we're in and around 40 and will be adding more jobs hopefully. These are very resourceful and hard working good people who created something really world class in Drumshanbo,” he remarked.

Pat said the primary reason he came to Drumshanbo was the people, the rural location and the unspoilt 'off Main Street' nature of the area.

“It was the people who attracted me here, how resourceful they were, how welcoming they were and together we built this. It's been a collaborative effort,” he added.

Pat thanked Leitrim County Council and all the local various associations who have helped them on the journey. “This is a huge effort to get something like this put together, particularly during Covid.”

Finally, Pat recalled the first day he came to Drumshanbo in December 2013.
“It was a rainy day. I met Noel, Fergal, Enda McGloin, Joseph Gilhooly and others. Within a space of a couple of hours of touring, I felt I could work with these guys, they could see my vision and, to be honest, they're the reason we're here,” he said.

Part of the overall development is the beautifully appointed Jackalope Café which is run by Siobhan Smyth and David Fitzgibbon who previously managed St George's Terrace restaurant in Carrick-on- Shannon.

Siobhan was full of praise at the official opening and said they were delighted to be a part of such an exciting project.
“It's a beautiful setting and everything's done to such a high standard. It's going to be great for the local area,” she said.

The café has an all day offering, starting at 9am – 6pm from Tuesday to Sunday.
“We are hoping to see lots of locals, you can come in through the shop and have a browse around or come straight into the cafe, we're not taking bookings, just turn up,” Siobhan said.

The café has 12 people working in it in addition to what is in The Shed.
“They are a lovely local crew. We're delighted to be able to get such lovely friendly staff so locally.

“Dave and myself were delighted to meet with Denise and Pat and get involved in the whole thing. It's such a beautiful project and hopefully with our food offering we'll be able to add to that,” Siobhan said.

The Visitor Experience Project team has been headed up by Joe Dolan, Fáilte Ireland Director and owner of The Bush Hotel in Carrick-on-Shannon and Eva Kelly, of Kelly’s Resort Hotel in Rosslare, Co Wexford.

Joe Dolan has described the new Visitor Experience as a vital economic and employment boost for Leitrim.
“It is a powerful psychological boost for the entire region, especially in the current climate and a wonderful enhancement to the tourist offering on Ireland’s Hidden Heartlands route. The experience is a model example of sustainable tourism, having been developed and managed in a sustainable manner”

Eva Kelly says the project has been an incredible journey.
“I am delighted to have been part of this incredible journey from the very beginning. Thank you to all the people of Drumshanbo and County Leitrim for helping make the Visitor Experience a reality.”

“The enormous support from the local community and all of our trade customers since the very beginning has been fundamental to the success of Drumshanbo Gunpowder Irish Gin and The Shed Distillery Single Pot Still Irish Whiskey.”

Meanwhile, William Lavelle, Head of IrishWhiskey360°, which is the collective promotional initiative for Irish whiskey distillery visitor experiences, congratulated Pat and Denise Rigney and their colleagues on the opening of their new visitor experience.

“Today is a great day for all the team at The Shed Distillery and it’s a great day for Drumshanbo. I have no doubt that this new visitor experience will draw many new tourists to the north west region and contribute greatly to the rural economy of Co Leitrim.”