Dr Padraig McGarty's new book looks at this period which involved raids on towns in the county such as those in Carrick-on-Shannon and Drumshanbo which involved acts of intimidation, shots fired and the Leitrim Observer being burned down 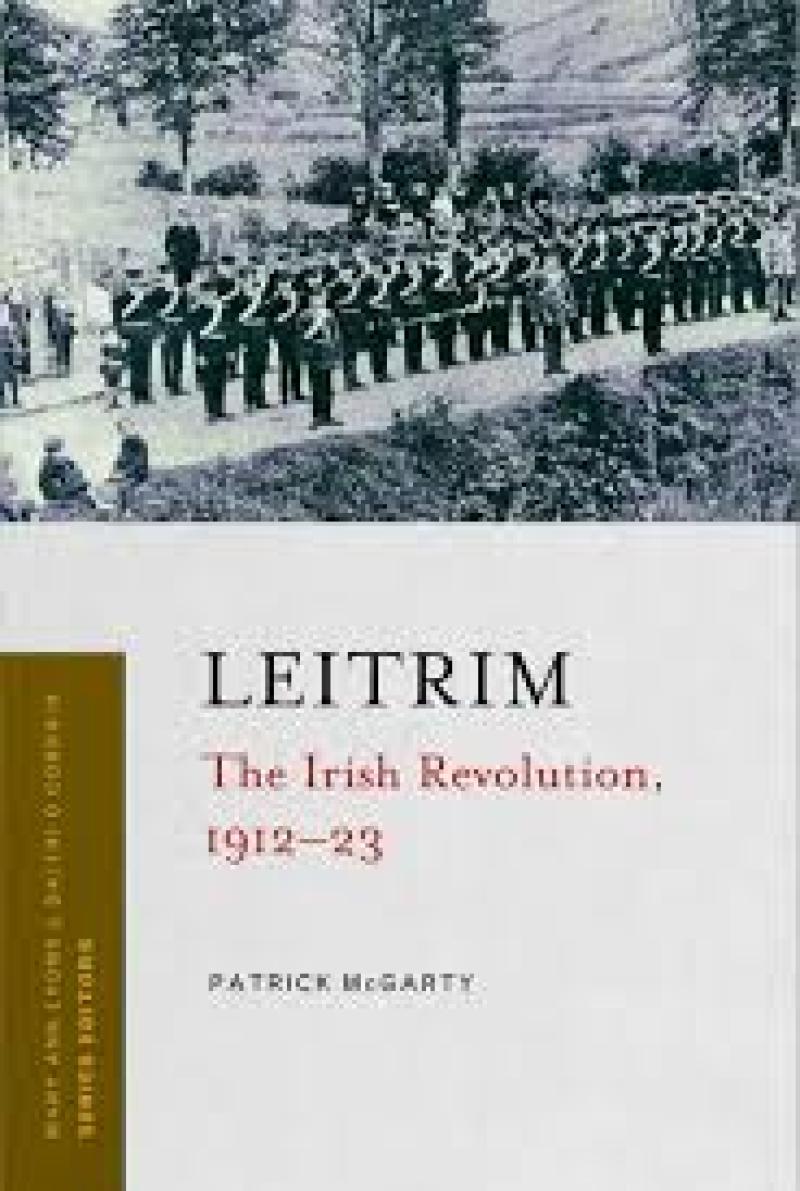 With the passing of the Restoration of Order in Ireland Act in August 1920, there was a dramatic escalation of state violence by crown forces across Ireland in their fight against the IRA.

In Leitrim, the killings of both Patrick Gill at Drumsna, and seventy-year old James Connolly at Kinlough marked the beginning of a concerted campaign across Leitrim against republicans and the communities that supported them. Gill, an IRA Volunteer, and Connolly, the father of James Connolly (Junior), a member of the South Donegal Brigade of the IRA were killed in controversial circumstances by crown forces in September 1920.

This period marked a new phase in the War of Independence with the commencement of increased coercion by crown forces including frequent raids on homes across Leitrim. One of the first attacks on a community was on the night of 21 September 1920 when Auxiliary RIC units rampaged through Carrick-on-Shannon.

The attack on Carrick was a reprisal for the presence of armed IRA men patrolling the local fair on the previous day. In the raid, the Auxiliary unit who were based in Boyle arrived in the town with blackened faces and fired shots and threw grenades into a number of buildings. The Roscommom Herald reported that, “a number of houses were entered by the raiders and young men taken out of their sleeping attire and marched some distance from their houses, had shots fired around them and were then forced to go down on their knees under threats of being instantly shot and forced to swear the police boycott in the town would be removed.”

Boycott and intimidation campaigns against crown forces and officials were a central part of IRA strategy in Leitrim which proved a constant source of frustration for the authorities.
Joe McCormack, the Sinn Féin Chairman of Carrick District Council, was marched down the town and shots were fired around him. McCormack was forced to swear an oath that the boycott against crown forces in the town would be lifted. The Anglo Celt reported that, ‘large numbers of families left the town for the country, fearing a repetition’.
In Carrick, a delegation of local townspeople immediately met the RIC County and District Inspector to discuss the recent actions of crown forces in the town.

Despite the assurances of the police that there would not be a repeat of the coercion against local people, a heavy military and police presence continued in Carrick with ongoing searches of the general public.
The printing works of the Leitrim Observer, and the adjoining home of editor Patrick Dunne, were raided by police and military, and the Anglo Celt reported that, ‘a picture of the Sacred Heart was taken from a bedroom and nailed to one of the doors’.
Drumshanbo was the next town to be targeted by Auxiliaries on 22 September where shots were fired and grenades thrown into the home of District Councillor John McPartlin. 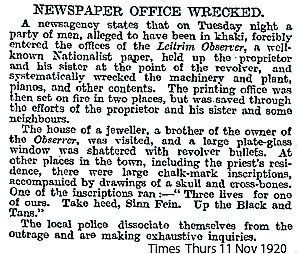 During the attack on the town, the home and business premises of Pat Conefrey, a local republican, was burned and a sum of money was stolen by the raiders. Fearing for their lives, the Conefrey family sought sanctuary in the nearby parochial house.
Attacks and provocation by crown forces continued across south Leitrim throughout September 1920 with a large police and military presence in the area.

On 24 September, according to the Roscommon Herald, Ballinamore was subjected to ‘scenes of terrorism now common across many towns in Ireland’.
It reported that, ‘several groups of police invaded the town and at every point possible used every endeavour to goad the public into anger’. The Leitrim Observer reported that crown forces fired shots into the Town Hall, and a young local man ‘received a serious bayonet thrust and is now lying in a rather serious condition as a result’.
With raids and searches becoming a common feature of daily life in the county, the September raids were only an indication of what was to come for the people of Leitrim as they faced into the autumn of winter of 1920.
Leitrim, The Irish Revolution 1912-1923 written by Dr Padraig McGarty was launched on 18 September 2020 by Professor Mary McAleese.

The book is available at local bookshops in Leitrim and nationwide. Signed copies of the book are available, with personal messages if desired, by emailing the author on pmcgarty1@gmail.com. The book is also available online at www.fourcourtspress.ie