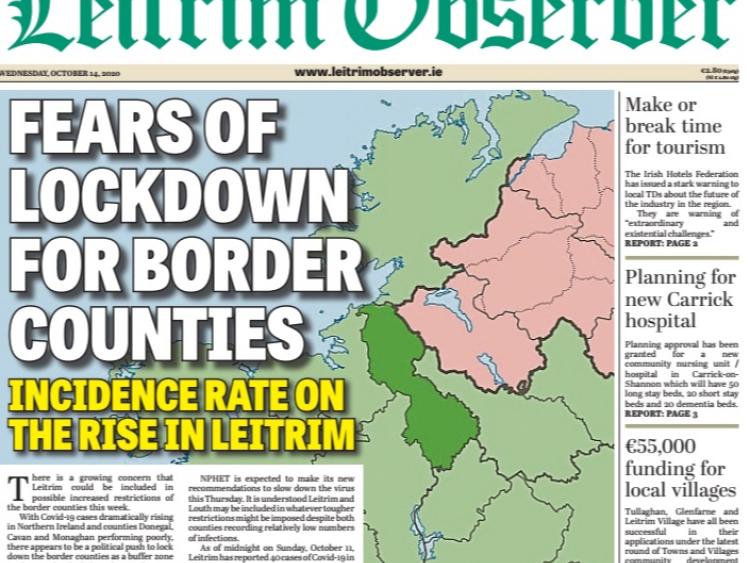 Fears of lockdown for border counties

There is a growing concern that Leitrim could be included in possible increased restrictions of the border counties this week.

With Covid-19 cases dramatically rising in Northern Ireland and counties Donegal, Cavan and Monaghan performing poorly, there appears to be a political push to lock down the border counties as a buffer zone to the North which has shown alarming levels of infection in recent days.

NPHET is expected to make its new recommendations to slow down the virus this Thursday, but Tánaiste Leo Varadkar said the government might make a decision on the border counties today following Northern Ireland's tougher restrictions.

It is understood Leitrim and Louth may be included in whatever tougher restrictions might be imposed despite both counties recording relatively low numbers of infections.

As of midnight on Monday, October 12, Leitrim has reported 44 cases of Covid-19 in the past two weeks, 34 of which have been recorded since last Thursday. That brings Leitrim's incidence rate to 124.8.

Cavan General Hospital has the largest number of Covid-19 patients, with 28 recorded at the hospital.

Cavan has the highest incident rate in the country (385.9) followed by Donegal (354.9) and Monaghan (330.7).
Leitrim continues to have the lowest number of cases in the country, but the level of incidence is increasing and community transmission is worrying.

With numbers of Covid cases increasing around the county, the Leitrim Observer contacted the HSE about the possibility of re-opening a Covid test centre in Co Leitrim.
The HSE informed the paper that they “are currently attempting to identify a suitable site for a Community Testing Centre in Leitrim and hope to have one operational in the near future.”

This response would indicate that the Health Service Executive are looking at using a different location for testing to the previous centre which was located at the Irish Wheelchair Association Building, Attifinlay, Carrick-on- Shannon.