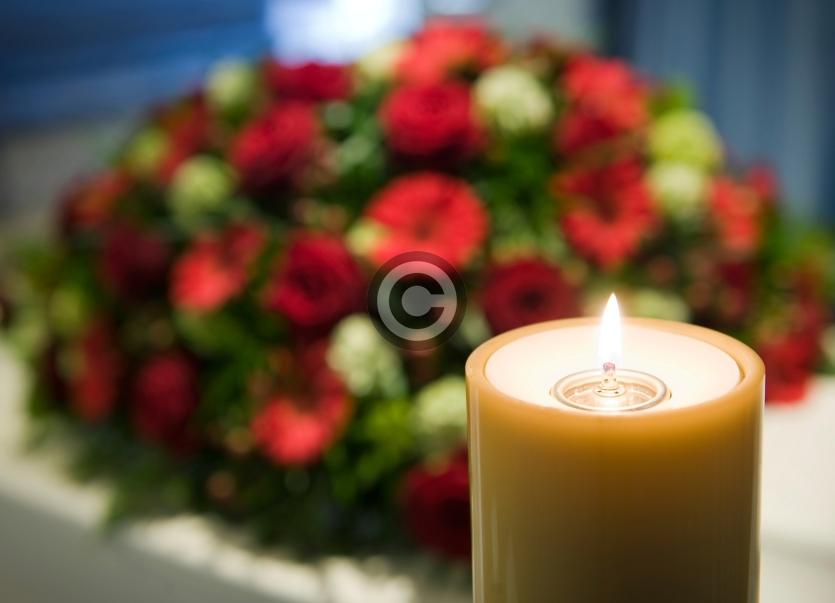 The death has occurred of Mary Tiernan (née McGarahan), Cornagher, Cloone, Co. Leitrim and formerly of Drumlea, Drumreilly who passed away Wednesday 14th October 2020 peacefully at Arus Carolan Nursing Home surrounded by her loving family. Predeceased by her parents; Patrick and Catherine, her husband; John and brother; Paul. Deeply regretted and sadly missed by her loving family her daughters; Catherine, Josephine and Teresa, sons-in-law; Enda, Willie and Paudge, grandchildren, great-grandchildren, siter-in-law; Marie, niece; Julie, nephew; Neil, relatives, neighbours and a large circle of friends. Mary will lie in repose at her residence with Funeral (25 people max) on Saturday, 17th of October 2020, at 12 noon in St. Mary's Church, Cloone followed by burial afterwards to the adjoining cemetery. The family appreciate your sympathy and understanding at this time. Mary’s Funeral Mass will be streamed live on: https://churchtv.ie/cloone.html

Peacefully, in the care of the staff at Laurel Lodge Nursing Home, Longford. Predeceased by her brother John (New York). Deeply regretted by her sister Ellen O'Donnell (New York), nephew, nieces, relatives and friends. Remains will arrive to St. Mary's Church, Drumlish, for 11am Funeral Mass on Saturday, followed by burial in Farnaught Cemetery. Following Government guidelines regarding public gatherings, the Mass will be restricted to 25 people only.

Joseph (Joe) Rooney, Breffini House, West End, Bundoran and Summerhill Apts, Main St, Bundoran, Co. Donegal and formerly of Manorhamilton, Co. Leitrim. Suddenly on 13th October 2020. Son of the late William and Elizabeth Rooney, brother of John and Bill (Australia), Pat (USA) and Ray (London). Removal from Breslin's Funeral Home, Bundoran on Saturday morning 17th October to arrive at the Church of Our Lady Star of the Sea, Bundoran for Mass of the Resurrection at 11am. Burial afterwards in St. Clare's Cemetery, Manorhamilton, Co. Leitrim.  Restrictions will be in place at the Church (max 25 people). The Funeral Mass can be viewed live at www.magheneparish.ie

Michael Kelly (Míchéal Ó'Ceallaigh), Cherryfield, Elphin, Co. Roscommon and formerly of Tulrush, Ballinasloe, Co. Roscommon. 14th October 2020 (peacefully) at Sligo University Hospital. Predeceased by his parents Michael and Nuala. Loving husband of Rosie, father of Dima and Anastasia and grandfather of Ruairí. Michael will be sadly missed by his loving family, his son-in-law Jason, sisters Breeda Grehan and Mary Darcy, brothers Aidan, John and Paddy, his mother-in-law Nonie Nee, brothers-in-law, sisters-in-law, nieces, nephews, uncles, aunt, relatives, neighbours and friends. Due to current government guidelines regarding public gatherings Michael's Funeral Mass and burial will be private to family only. The funeral cortege will depart from his home, in Cherryfield, on Saturday morning at 11.30am, arriving at St Patricks Church, Elphin for Funeral Mass at 12noon. Burial afterwards in Creagh Cemetery, Ballinasloe (at 2.30pm, via Tulrush). Funeral Mass will be live streamed on https://churchtv.ie/elphin