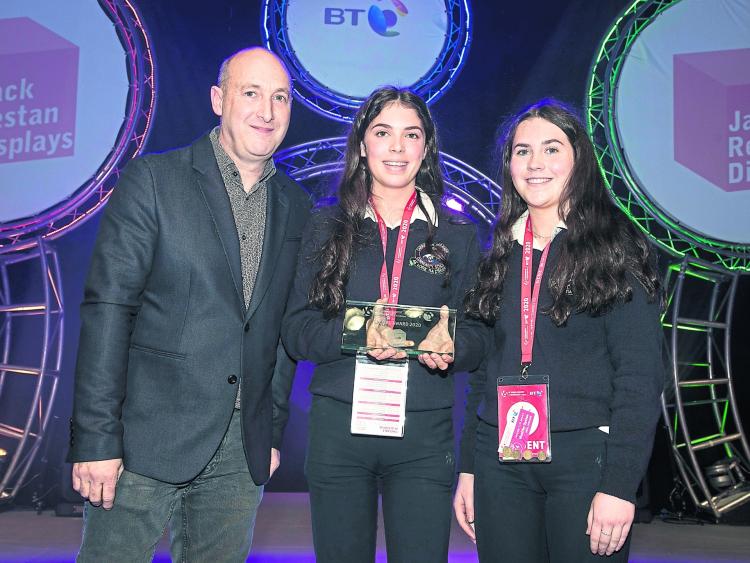 Two Carrick-on-Shannon Community School students, Erica McTiernan and Hannah Stenson, will be flying the flag for Leitrim when they represent the county at the SciFest National Final.

Earlier in the year Hannah and Erica claimed the Jack Restan Displays award in the special awards category for their project ‘The lasting effects of Arigna coal mine on the environment’ while the work was also highly commended at the BT Young Scientist and Technology Exhibition.

The girls explained to leitrimobserver.ie "We are given 5 minutes at the start to present our project. This will be followed by 15 minutes of questions from the judges.

"We also recently completed a video for the SciFest STEM Outreach Award. The video was 2 minutes long and has a chance of wining €300. The video will be published live on the SciFest National Final website and voting will commence on Monday, November 16th and will close on Friday, November 27th at 5pm."

Erica outlined "The title of our project is the lasting effects of the Arigna coal mine on the environment. The aim of our project was to investigate the long-term water pollution from a closed mine by studying acid mine drainage and Benthic Macroinvertebrates as bioindicators.

"During the process of this project we hoped to investigate the lasting effects of the Arigna coal mine on the environment, particularly focusing on the water pollution.

Hannah continued "We obtained these samples using the kick sampling method. Using a brush and gloves we searched the contents of the net for macroinvertebrates. When we found an invertebrate, we placed it in a glass jar and covered it in ethanol.

"We examined the macroinvertebrates under a microscope and identified them. The different species found gave us an idea of the quality of the water, using the biotic indices and macro invertebrate methodology. The biotic indices told us that the upstream water samples are in the Q3-4 group which means the water is slightly polluted but of a moderate quality. However, the water quality deteriorated in our downstream sample as the Q value dropped from Q4 to Q3, meaning the water is moderately polluted.

"Upstream was very diverse with many species such as mayflies, freshwatershrimps, caddis fly etc. There was also plenty plant litter upstream but much less downstream. Our downstream sample was not diverse as we only had bloodworms which are tolerant to pollution. We gathered a few rocks that were orange brown in color possibly indicating acid mine drainage.

"Our results from the water samples were that the upstream sample was slightly acidic with an average PH of 6.214 and it was within the range expected for conductivity in freshwater at 54.54 μS. Our downstream sample had a PH of 7.126. The conductivity was significant downstream with an average of 472.4μS. This reveals that there was a large amount of impurities in the water, proving the poor water quality."

"Overall, from this project we know that the difference in our upstream and downstream samples are concerning and mines can have long term effects on the environment. The poor quality may not just be from the mines but also other influences like nearby farming and the road above the stream. We must take all these factors into consideration," concluded Erica.

So best of luck to Erica and Hannah as they face the judges tomorrow, no doubt they will do their school and county proud.