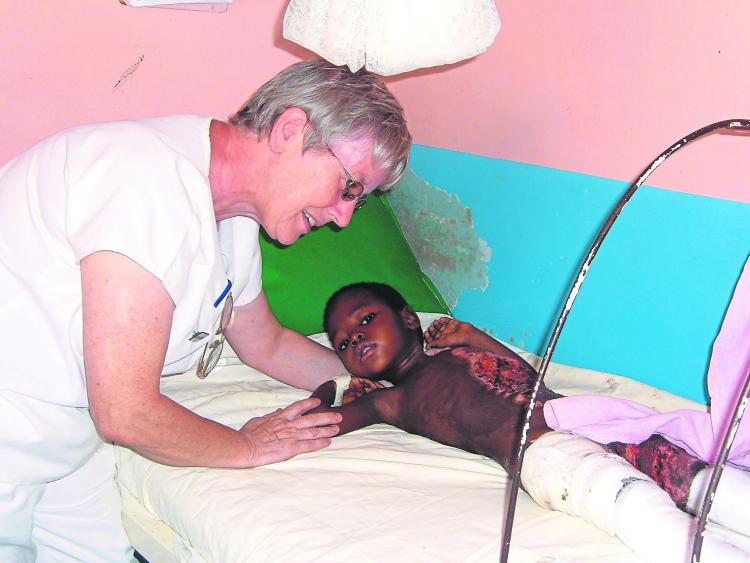 The death has taken place of Anita McTernan, from Dromahair who was a care worker for many years in East Africa.
Anita, originally from Mullaghdoo, Dromahair, had worked as a volunteer nurse in a Sisters of Mercy, Mission Hospital in Mutomo, Kenya since November 1999.
She came back home to Ireland from Kenya last June with shingles but despite treatment her health continued to deteriorate.
Anita passed away peacefully after a short illness on October 29 last at the North West Hospice, Sligo.
Anita featured regularly in the pages of the Leitrim Observer over the years as she made fundraising appeals for assistance for their work among the poor and needy in Kenya.
Anita originally volunteered for a two year period at the hospital and was sponsored by APSO, the Irish government agency for personal service overseas.
She later became the Coordinator of Programmes on the hospital's management team.
The Mission Hospital, primary school and secondary school was originally established by the Sisters of Mercy from the Diocese of Elphin.
Four nursing sisters belonging to the Irish Congregation of the Sisters of Mercy established the hospital in 1962 in Mutomo which is about 250 km from Nairobi the capital of Kenya.
The hospital has a staff of 107 people and all were Kenyans except for Anita.
In her two decades of volunteering in Kenya she assisted in advancing conditions that saw dramatic improvements in the quality of life for patients at the hospital.
In her time there, Anita established a new isolation unit to cater for children suffering from burns or snake bites.
Because it is a mission hospital it receives no financial support from the Government in Kenya. Many patients are unable to pay anything for their treatment.
The local people effectively live in bush country which is very remote and semi-arid, and have to use dirt roads to travel to the hospital.
Mutomo hospital feeds between 250 and 280 children every month on a diet of eggs, flour, maize and milk. Clubs have been established for the orphan children and these include 10 in outlying areas. Activities for participants include playing, singing and developing social skills. There are also 43 community help support groups for adults. Anita leaves behind her a lasting legacy of her wonderful charitable work.
Anita was predeceased by her parents Geoffrey and Peggy and her brother Joseph. She is survived by her loving sisters Mary, Frances, Ann, Margaret and Josephine, in-laws, nephews, nieces, relatives and friends.
Requiem Mass for Anita took place in St Mary's Church, Killenummery, on Saturday, October 31, followed by burial in Carrowcrin Cemetery afterwards.
May she Rest In Peace.