Public are asked to submit their opinions 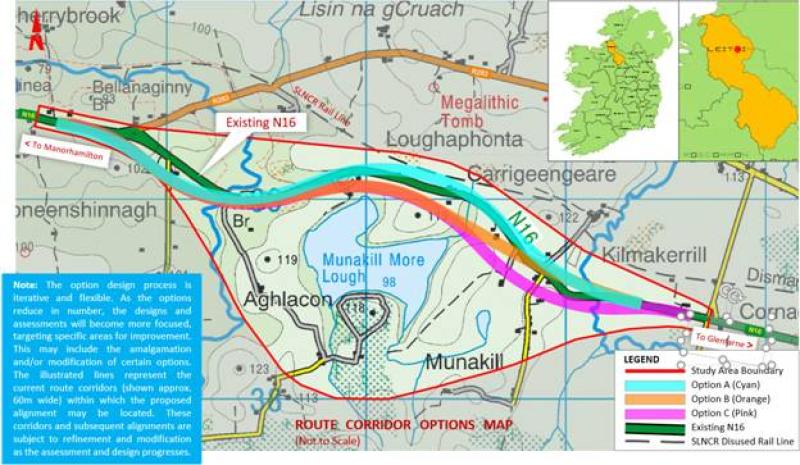 Residents, members of the public and interested parties are being invited to participate in the second public consultation on the route corridor options for the N16 Munakill Realignment Scheme in North Leitrim.

Leitrim County Council say delivering the project is a priority as the safety of the existing N16 at Munakill is compromised by a poor alignment, poor visibility, narrow verges, substandard junctions and many private access points.

The overall aim of the proposed new scheme is to improve connectivity of North Leitrim and address existing operational and safety issues.
Now the Council, in association with Transport Infrastructure Ireland (TII), is inviting interested parties to participate in the second public consultation which runs from Wednesday, November 18 to Friday, December 18.

This second consultation process is focused on the route corridor options developed for the scheme.
Meanwhile, members of RPS Consultants who are developing the project, met with local councillors at the Manorhamilton Municipal District meeting online on Monday last.
Rowan Callaghan the Technical Director outlined the three route corridor options put forward for consultation.
They said if Government restrictions are eased before the closing date of the consultation there could be a possibility of a public meeting to discuss the plans.

Cllr Sean McDermott asked why there was so little difference between the existing road and the new route options.
Mr Callaghan said “unfortunately our hands were tied” and they had a small area to “squeeze in” alternative options.
He explained that the area has a number of constraints including a Special Area of Conservation, a graveyard, lake and heritage sites.
Cllr McDermott added he would like to see a hard shoulder on the new road and this sentiment was expressed by all the councillors.

Cllr Felim Gurn asked when it is expected the works will begin on the road. He said it would be ideal if it could be done in conjunction with the SLNCR greenway.
Mr Callaghan said they are working with the council in conjunction with the proposed greenway and said it is hoped the road could “contribute to the SLNCR.”  He said the road should be ready for the start of construction in 2022 if funding is in place.

The consultants would not put a price on the works as they said it depended on a number of variables.
Cllr Gurn said with the greenway so close it would make sense to make sure both projects go ahead at the same time to limit damage for landowners.

Cllr Padraig Fallon asked if all efforts had been made to “minimise division of small land holdings?” He was told a lot of work had gone into this project but either way some landowners are going to be disrupted by the construction.

A brochure is being posted to all households within the study area, which includes a map of the route corridor options and a questionnaire to provide people with an opportunity to submit their views at this stage of the design process.
People can also view project details online at www.leitrimcoco.ie/eng/Services

The N16 Project Team is available to answer any questions and provide information to assist people with their submission. To arrange a telephone call or online consultation with a member of the project team (via MS Teams or Zoom), please contact them by phone 071 9138909 or email n16munakill@rpsgroup.com

Online consultation meetings will be facilitated between November 23 and December 4. Subject to Covid-19 restrictions, in-person consultation meetings may be arranged during the week beginning Monday, December 7.
If anyone would like to make a submission, please do so by Friday, December 18 by email: n16munakill@rpsgroup.com or by post to N16 Munakill Project Team, RPS Consulting Engineers, 7 Beulah Building, Finisklin Road, Sligo, F91 A0H9.
The project team can be contacted at the above email address or telephone 071 9138909 (weekdays, 9am to 5pm).