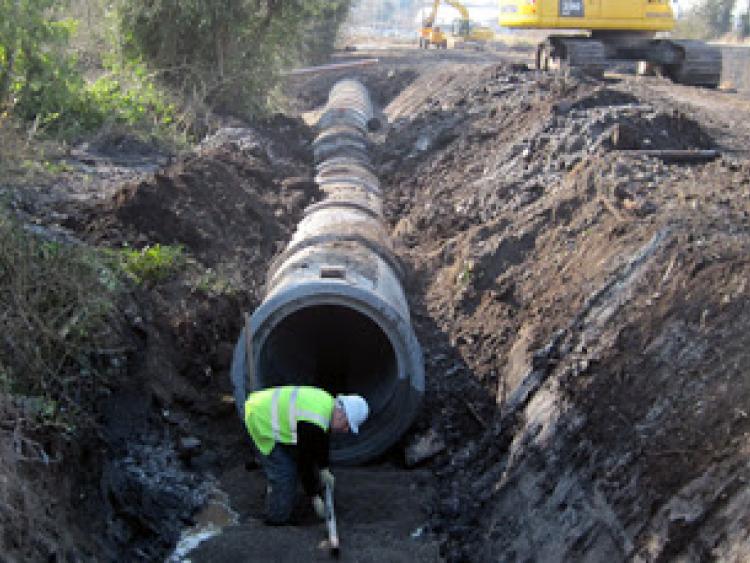 The current pandemic has exacerbated the demand and need for more houses to be built in County Leitrim.

While Leitrim County Council are meeting with the EPA and Department of Housing to try and find a solution to the problem with one-off rural houses and individual septic tanks in Leitrim, a new call has emerged to allow towns and villages be extended.
Ballinamore area councillors are writing to Government ministers to ask for help and funding to extend sewerage connections out of Leitrim's existing towns and villages to allow ribbon developments.
Carrigallen councillor, Paddy O'Rourke, stated this week, “There has to be one or the other; either we can build one-off houses or we extend our towns and villages.”

He said that when the EPA guidelines were introduced over a decade ago “we were led to believe that more sewerage schemes would be extended and lands would be opened up around towns and villages.”

He emphasised this hasn’t happened and the cost and complications surrounding a connection with Irish Water has put applicants off.
The council said there are “complex issues” surrounding new connections and extensions, but they agreed to jointly write to the Government.

The call to extend Leitrim's towns and villages' sewerage systems to allow more houses to be built arose after Cllr Caillian Ellis asked for an update on the progress of the one-off housing planning impasse at Monday's Ballinamore Municipal District meeting.

He was informed that a revised Code of Practice for one-off houses is awaiting Departmental review. However, it is expected to contain only marginal alterations that may not help the serious issues in Leitrim.
Cllr Enda McGloin noted a number of meetings have taken place between the council, the EPA and department officials in a bid to find a solution for Leitrim. He also added that the new outcome, if applicable, could see up to €30,000 added onto the price of a new build.

All councillors said they knew of many Leitrim people living at home, abroad and in Dublin who wish to build a house in their native county.
Cllr Brendan Barry welcomed the improved planning application results (here) and suggested that any pre-planning meetings with the council be held on the proposed site of any planning application. He said such a meeting would cut costs and time for applicants.

He suggested council planners could then inform architects and the applicants what part of the site would work best and other details needed before an application is sent in. This was hailed as a great idea by the rest of the councillors.

IRISH WATER
In relation to extending existing sewerage schemes, Cllr McGloin said they should write to the ministers involved asking about funding for such schemes in Leitrim.
Director of Services, Vincent Dwyer agreed with Cllr McGloin saying he will add the council’s involvement in the letter.
He did say that the issues surrounding the taking in charge of group water schemes by Irish Water is complex and expensive.
Speaking about one-off housing, he said, “Leitrim County Council has made every effort to progress the issue but there needs to be a desire nationally.”

Cllr Paddy O’Rourke said the estimates put forward by Irish Water to those who wish to connect to an existing scheme are “extraordinary.”
He said he knows of one case where an applicant had a genuine estimate for €20,000 from a contractor in another county to connect to an existing Leitrim scheme only to be told by Irish Water the true cost could be €62,000. This new cost put the plans in jeopardy. He said Irish Water are including projected expenses and future maintenance of the network in the costs to applicants.

The cost alone without the extra paperwork is putting applicants off the idea of connecting to sewerage, he said.

Also read:  23 one off houses granted planning in Leitrim in 2020