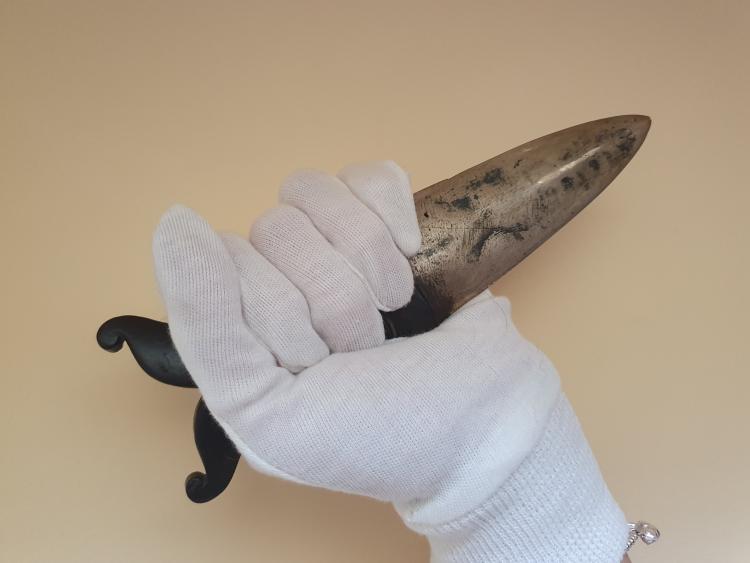 "Is this is a dagger that I see before?"

That's the famous line in Shakespeare's violent play Macbeth which lends itself perfectly to this story about the sale of a late Bronze Age dagger discovered in 1903 which has been sold to the National Museum of Ireland by Sheppard’s Irish Auction House, Durrow, Co. Laois.

The dagger was found in south-west county Laois beside the Annagh bridge over the River Nore, and was located near the road leading from Coolrain to the Pike-of-Rushall. The finder was Jack Feehan, known locally as ‘Jack the fisherman’.

Auctioneer Philip Sheppard said it is thought that finds in the water suggest votive offerings to archaeologists since they would be awkward to retrieve.

"A common ritualistic practice in the later Bronze Age was the deposition of hoards in sacred places including river fords which formed part of the sacred landscape. The dagger, most likely a ritual offering, was in the possession of James Roe, a justice of the peace from Killavilla, Roscrea, Co. Tipperary until 1929 when it changed ownership," he said.

At 20 cm. long, the ‘Jack Feehan dagger’ has a leaf-shaped blade with a mid-rib. The evolution of a mid-rib on metal daggers by the end of the Early Bronze Age, served to strengthen them for combat use. Many copper and copper-alloy dagger forms, are known from Europe in the late third to early second millennium BCE. As general-purpose tools they would have had many uses including, but not restricted to, fighting.

The earliest daggers in Ireland had quite flat cross-sections and ranged from pieces with blades a few centimetres long to examples with blades over 20 cm., constituting serviceable weapons. While little edge wear is visible on any daggers from this period (blade-on-blade impacts are unnecessary for dagger combat) and, because flesh and bone are not prone to causing damage, it can be difficult to measure their functions in combat.

The Bronze Age denotes the first period in which metal was used with metalwork being one of the defining features of the Age: in Ireland, it lasted from about 2000 - 800 BCE. Knowledge of how to make bronze, an alloy of tin and copper, came to Ireland from Europe.

The copper was mined in Ireland, chiefly in Co Kerry, while the tin was imported from Britain. The earliest copper mine in the country was at Ross Island, Killarney. Irish metalsmiths created large numbers of weapons, perhaps because society became more violent.

The commonest object forms produced were swords and spearheads, and daggers to a lesser degree making this new acquisition by the NMI from Sheppard’s auction house all the more significant.