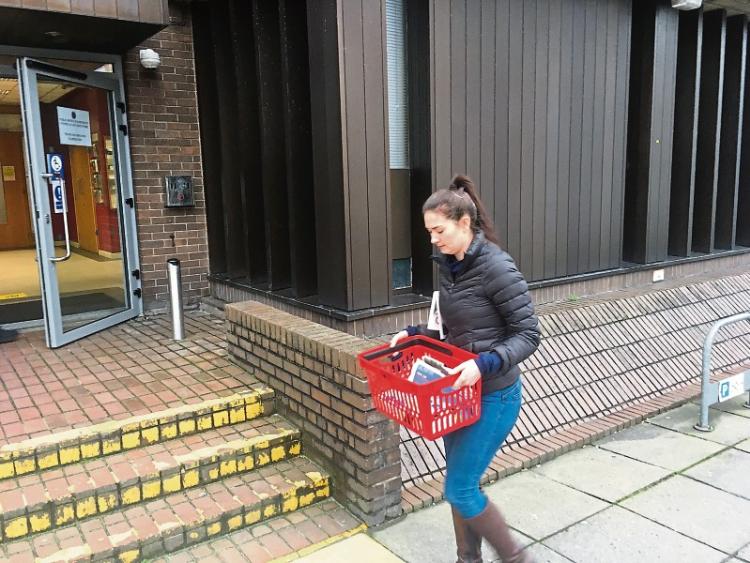 IT WAS an unusual experience both for the garda on the counter in Henry Street and Limerick journalist, Hannah Quinn-Mulligan, who had a basket of antibiotics bought in Northern Ireland in her hands.

Gardai are more used to seizing drugs from people than people surrendering them which is exactly what Ms Quinn-Mulligan was doing.

The Farmers Journal reporter went to Henry Street following an excellent investigation by the newspaper into the sale of veterinary medicines, the Limerick Leader has learned from sources.

Ms Quinn-Mulligan travelled to Northern Ireland in early February where she purchased antibiotics over the counter. Of the 11 vet practices she visited, eight sold her antibiotics without proof of ID, a prescription or herd number. Ms Quinn-Mulligan’s accent – not only southern but south Limerick – appeared not to arouse suspicion.

In human terms, it is the same as going to a pharmacy and purchasing antibiotics without a prescription from your GP. Concerns have been expressed at the ease at which the veterinary medicines were dispensed for cash. And questions asked to how widespread this is and the implications for farming?

Sinn Féin spokesperson on Agriculture Matt Carthy said: “The correct dispensing of anti-microbial products is crucial for human health as much as animal welfare.”

He said, “A full investigation is needed into rogue vet practices”.

Ms Quinn-Mulligan was pictured entering Henry Street Garda Station on Saturday, February 13 with the antibiotics bought in Northern Ireland. A short time later she left, seen still in possession of the drugs. Many names will be familiar to farmers like Betamox and Oxytocin.

When contacted by the Limerick Leader, Ms Quinn-Mulligan declined to comment.

This newspaper then asked gardai if an investigation is being launched. A spokesperson said it is “a matter for the Department of Agriculture”.

A follow up query was sent to the Department of Agriculture asking if they were commenting on the Farmers Journal investigation and if they were responding to Deputy Carthy’s comments.

A spokesperson said the Department of Agriculture and Marine (DAFM) carries out investigations into allegations of breaches of legislation by veterinarians.

“As part of  Full Cross compliance inspections (around 1,400 farmers per year) DAFM  carries out checks for  record keeping by farmers (including animal remedies) under SMR 4 (food and feed hygiene) and SMR 13 (welfare of farm animals).

“Under SMR 13 DAFM carry out checks on the animal remedies records. We check to ensure the farmer maintains such records for five years including details of veterinary products purchased, treatments administered to animals, the dates of treatment and the withdrawal period. Where we find non compliance  sanctions may be applied. We can also check record keeping under SMR 4,” said the spokesperson who gave examples.

In 2018, DAFM applied sanctions under SMR 13 on 26 herd owners for not maintaining their animal remedies records correctly.

In 2019, they applied sanctions under SMR 13 on 27 herd owners for not maintaining their animal remedies records correctly.

“Where other divisions of DAFM establish non-compliance with animal remedies record keeping, it is cross reported to Direct Payments Area,” concluded the spokesperson.

“A new European Regulation intended to combat anti-microbial resistance may well see all veterinary medicinal products require a veterinarian prescription from the beginning of next year in this state.

“Over the past number of months the Oireachtas Agriculture Committee has heard from those in the Licensed Merchant sector as to how they fear for their businesses if this occurs.

“Here we have genuine businesses being banned from plying their trade while at the same time it appears that a blind eye is being turned to rogue actors in the sector,” said Deputy Carthy.

He continued: “This disparages all those veterinarian practices that properly adhere to regulations and I commend those practices who refused to dispense to the journalists involved. The correct dispensing of anti-microbial products is crucial for human health as much as animal welfare.”

Deputy Carthy said these revelations will come as no surprise to anyone familiar with the matter, however. For decades there has been a failure to tackle this head on, he said.

“Last year Longford District Court issued an invitation to then Minister Creed to attend the court on this very issue.

In that case, one department veterinary surgeon described how tackling this was becoming more difficult due to departmental cutbacks and an absence of political will.

“The minister must engage with his northern counterpart, Gordon Lyons, to immediately launch a full inquiry into these practices in order to shed light on this dangerous behaviour.

“I will be bringing this to the attention of the Oireachtas Agriculture Committee in the coming weeks and asking that the Committee demand a full investigation into these practices,” concluded Deputy Carthy.