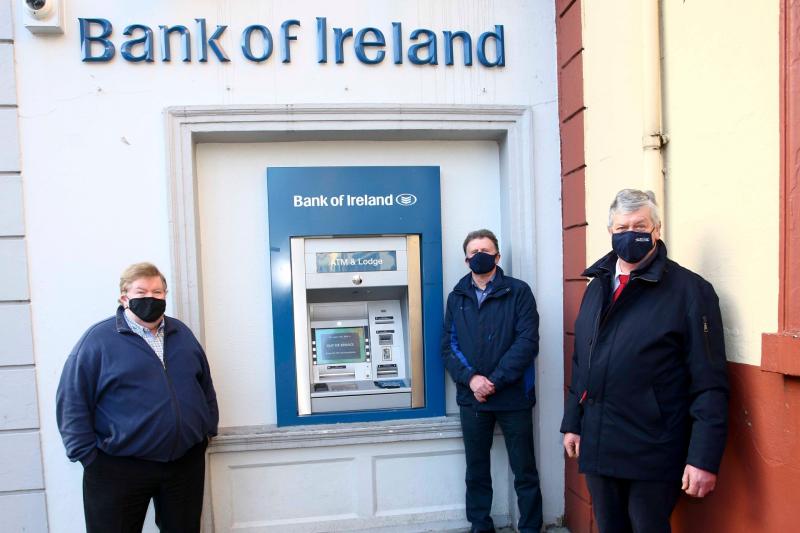 Leitrim's County Councillors have called on Bank of Ireland to revisit plans to close 88 of its branches in the Republic of Ireland, including two in Co Leitrim. A further 15 branches will close in Northern Ireland.
News of the closures broke just prior to the March meeting of Leitrim County Council.
Councillors said they were 'mystified' by the rationale behind the decision to close branches in Drumshanbo and Manorhamilton later this year.
Cllr Enda McGloin said that, in the case of Drumshanbo, a significant investment had been made last year in the provision of wheelchair access at the branch.
“Now they are closing the branch and the long term impact on the community and community activity will be enormous,” he told Monday's council meeting.
“It is mystifying, especially when you consider that Bank of Ireland own the building.”
He said it wasn't clear the extent of services which will now be provided by An Post but pointed out that the loss was an “enormous blow”.
Cllr Sean McGowan said that, while there was some relief that more branches in the county aren't closing, there  “seems to be an assumption that everyone is able to go online to bank”.
He agreed that Bank of Ireland should revisit the decision to close branches. His call was echoed by Cllr Enda Stenson who said he was “shocked” by the move.
The closures have been described  as a massive blow for the communities involved.
“These closures will have a long-term impact on the communities and economic activity,” said Cllr McGloin. “It is a huge blow to rural Ireland”.
Cllr Brendan Barry pointed out that the bank in Drumshanbo wasn't just about the provision of services, it was also a vote of confidence in the town. This was echoed by Cllr Gerry Dolan who pointed out the volume of business in the town justified the branch remaining open.
Cllr Fallon pointed out that the closures will hit particularly hard in Manorhamilton where the community has already lost an Ulster Bank branch and now is losing its Bank of Ireland branch.
“This is a backward step. It is not good for business,” he said.
Cllr Felim Gurn, who is also a businessman in Manorhamilton spoke of the “enormous disappointment” at hearing of the closures especially in light of the financial and social impact of the pandemic.
The loss of the Bank of Ireland ATM will also, he said, have a negative impact on the night time economy of Manorhamilton estimating it will take “in the region of €400,000” out of circulation.
“This closure certainly doesn't augur well for the future of rural communities,” said Cllr Sean McDermott.
“It's not just about having a bank in a town, it's about the personal service offered by staff to customers. That will be gone,” added Cllr Finola Armstrong McGuire.
“Once these branches are gone there will be no personal connection between Bank of Ireland staff and customers in these communities and that is wrong,” added Cllr Justin Warnock.
“We are also seeing branches go in Donegal. Now if you want to go to a Bank of Ireland branch and you live in North Leitrim, you'll have to go to Sligo.”
Cathaoirleach, Cllr Mary Bohan said that everyone was shocked by the news while Cllr Ita Reynolds Flynn observed that “it's so unexpected”.
Cllr Paddy O'Rourke said it clear there is “no joined up thinking” by banks and other service providers noting that this was going to leave customers “with little or no banking choice in the future”.
Cllr Des Guckian said he feared that “more branches will follow" adding “it's clear that banks have no respect at all for their customers.”
“The only solution to stop this silly nonsense is to nationalise banks and to do it straight away,” he said.
Despite Bank of Ireland announcing a partnership which will see some customers able to complete financial transactions in their local post office, councillors remained unconvinced that this was the right way forward.
“People go to a bank for more than making a deposit or withdrawing money and that service won't be there in these communities. You have to remember that a lot of people don't have access to the internet as well. What will they do?” asked Cllr Gurn.