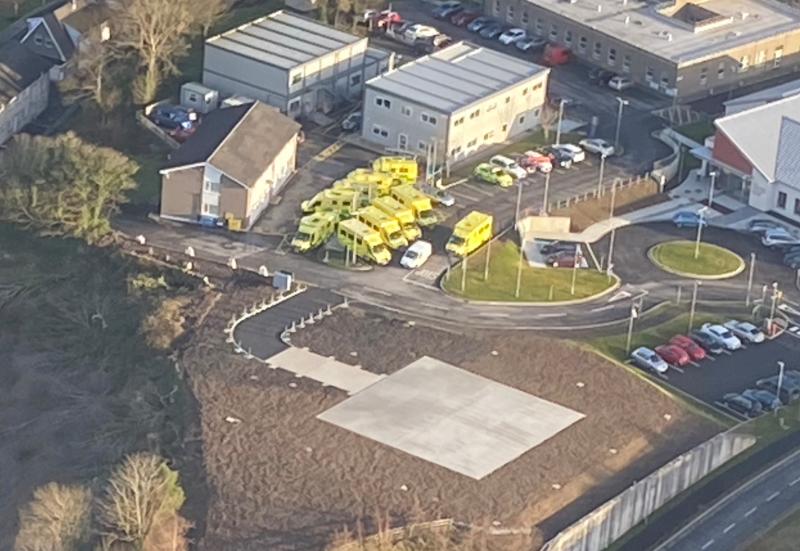 Sligo University Hospital (SUH) has completed construction on a new and improved helipad at the hospital at a cost of €300,000.

The Air Corps 112 Emergency Aeromedical Service (EAS) and the Irish Coastguard Helicopter Rescue 118 carried out the first test landings on the new helipad at the hospital last month. Safety checks and test landings will continue and the helipad will be fully operational later this month.

In 2018 HSE Estates appointed Rose Aviation to carry out a full review and design of a fully-compliant helipad to meet the requirements of the operators of the helipad.

Dr Michael Sweeney, Consultant in Emergency Medicine said, “Sligo University Hospital serves a large catchment area, which includes many areas which can take a long time to reach by road.  Our colleagues in the National Ambulance Service utilise the Irish Air Corps and the Irish Coastguard Service for air support.

“Our helipad is vital for safely bringing emergency 999/112 patients from rural isolated areas to the Emergency Department at Sligo University Hospital. Over the years we have treated all manner of medical, surgical, traumatic, paediatric and obstetric patients who have been brought to the hospital by helicopter.

“It is also used for the transfer of patients who are rescued from the sea, from ships or from mountain tops directly to the hospital for immediate assessment and treatment.

“The helipad is critical for the urgent transfer of very ill patients to other centres for specific treatments. These include newborns or very sick children requiring immediate treatment in Crumlin or Temple Street Hospitals. Patients who have had strokes or heart attacks present to our ED for initial treatment and stabilisation and are subsequently transferred by air to University Hospital Galway or Beaumont Hospital for specialist care.  We also need the air transport service to get patients with neurosurgical emergencies to Beaumont Hospital and for time-critical interventions in Cardiothoracic Surgery, Vascular Surgery and Spinal Surgery.

“During the upgrading works, the helicopter operators have been using Sligo Airport in Strandhill and IT Sligo with ambulance transfer to and from the hospital. The new helipad on site at SUH will shorten the patient’s journey, remove the need for the patient to be transferred in a second ambulance and will be much safer as it is immediately adjacent to the Emergency Department, ICU, Coronary Care, NICU, and the ambulance station.”

Grainne McGann, Hospital Manager said, “This is a significant development for Sligo University Hospital. Everyone is aware of the vital roles that hospitals and air ambulances play in treating a critically ill patient, and having a helipad beside the Emergency Department can play a significant part in saving vital minutes when transporting a patient to the expert care they need. It will make the transfer quicker and more seamless for the patient.”

A spokesperson from CHC, which provides the Coast Guard Search and Rescue Service, commented, “The crews of the Irish Coastguard Helicopter Rescue 118 based at Sligo Airport are delighted to be able to land at Sligo University Hospital. Well done to all involved in the development. The new hospital helipad is first class and will ensure the prompt transport of casualties in the North West region to definitive care. And yes, it has the best views in Ireland!”

The Irish Air Corps stated, “The opening of the new Sligo University Hospital helipad is a great development. It will allow patients even quicker access to hospital care when flown in on the Air Corps Emergency Aeromedical Service (EAS) helicopter or when used for inter hospital transfers. Not only does it reduce the patient transfer time, by landing at the hospital, it increases the level of flight safety for the patient and the flight crews, especially during night vision goggle operations."

Shane Bonner, Operations Director with Rose Aviation added, " We were very happy to have been involved in the design, construction and operational implementation of the helipad at Sligo University Hospital. It represents an extremely significant improvement in aeromedical resources for the people of Sligo and for the country in general. It will assist greatly with saving lives and enabling patient safety and comfort. We wish all the helicopter crews that will use this helipad safe flying for many years to come.”