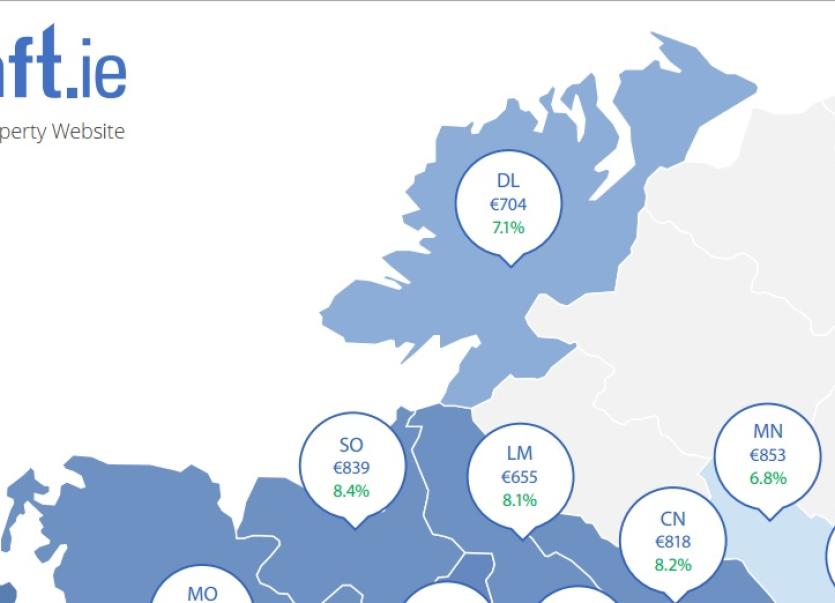 In Leitrim, rents were on average 8.1% higher in the first quarter of 2021 than a year previously. The average listed rent is now €655, up 59% from its lowest point.

The national average hides significant regional variation. In Dublin, while rents did rise 1.2% between December and March, they remain 3.2% lower than a year previously, following falls in the second and fourth quarters of 2020. Outside Dublin, rents rose by an average of 2.9% between December and March, meaning that they are now 7.1% higher than a year ago. In Cork, Galway and Limerick cities, rents are 6% higher than a year previously, while in Waterford they are 8.3% higher. Outside the five main cities, rents are up 7.3% year-on-year.

"Limiting the country’s ability to harness foreign savings to build the rental homes it needs – for example, by limiting the ability of professional landlords to invest here – will worsen, rather than improve, the situation."
The different trends over the last year have reflected different trends in the availability of rental homes, with supply up in Dublin and down elsewhere. In Dublin, the year-on-year increase in homes available to rent fell from almost 90% on November 1st to 20% on May 1st. There were just under 2,500 homes available to rent in Dublin at the start of May. Elsewhere, rental supply remains very low, with just 1,150 homes available to rent on May 1st, down one third from the same date in 2020.

Commenting on the report, Ronan Lyons, economist at Trinity College Dublin and author of the Daft Report, said: “The impact of Covid-19 on Ireland’s rental market was largely to send Dublin and the rest of the country in different directions. In Dublin, additional supply moving over from the short-term lettings market coupled with a temporary halt to people moving to the city pushed rents down. Elsewhere, lockdown ground the rental market to a halt, with fewer listings pushing rents further up.

As normal life resumes over the coming months, these differences are likely to fade and more long-standing problems – in particular chronic undersupply of new rental homes – will be the main driver, within a broader context of economic and population growth. It is imperative that housing policy in general – and rental market policy in particular – be driven by an understanding of the challenges and required solutions, rather than news-cycle pressures. Limiting the country’s ability to harness foreign savings to build the rental homes it needs – for example, by limiting the ability of professional landlords to invest here – will worsen, rather than improve, the situation. The doubling of rents over the last decade is all the proof needed that Ireland needs to build tens of thousands of new rental homes over coming years.”