MOTORING REVIEW: Now I understand why the future of motoring truly is electric 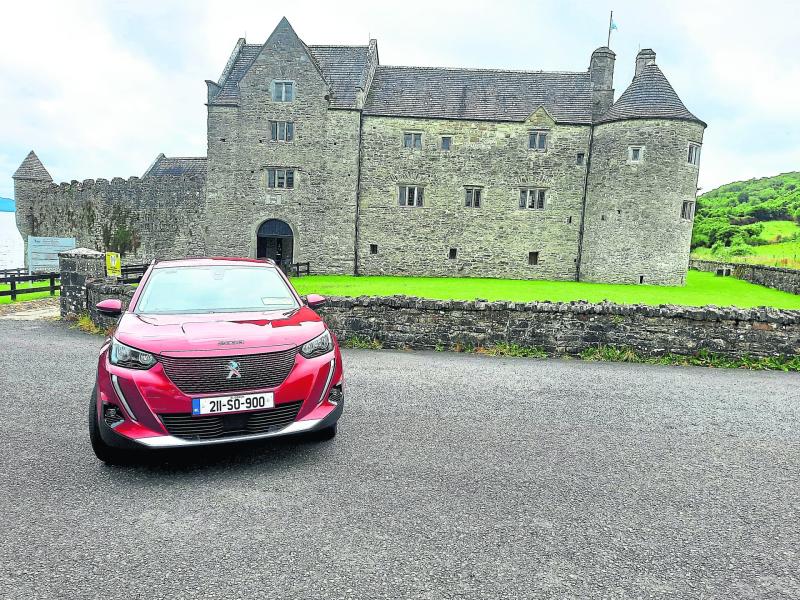 This car went everywhere - even visiting Parkes Castle during my travels

I am a committed diesel driver. Just driving to and from the office on an average week clocks up over 300km and when I have to travel to courts, council meetings or to do features, you can add significantly more to my daily commute.

The idea of buying an electric vehicle (EV) wasn't something I had ever considered. Like most, I was wary of their range, intimidated by the whole charging process and also worried about what it would be like to drive an EV. Would I be compromising on performance just for environmental kudos?

So when the opportunity came to test drive a Peugeot e-2008 Allure model electric SUV, I jumped at the chance to see if the hype was just, well, hype.

There's no denying that the e-2008 is a beautiful car, stylish lines and all the comforts you'd expect from a modern vehicle. But while I was impressed by the look and high spec of the e-2008, what really won me was the drive, the efficiency and ease of use offered by this EV.

With a WLTP (Worldwide Harmonised Light Vehicle Test Procedure) full charge range of 310km I was nervous when I collected the e-2008 from Kevin Egan Car Sales in Sligo, after all, I live just a few miles outside of Carrigallen near the Longford/Cavan border and there are plenty of hills, and kilometres, in between.

Changes in the Local Link service are users left “stranded”

I shouldn't have worried. Driving the e-2008 was as simple as depressing the brake pedal, pressing the start button, putting the gear lever into drive and just accelerating away. There is no clunking automatic gearbox; you put your foot down to accelerate and lift it to slow down. It's as simple as that.

Even in the ultra frugal Eco driving mode, the drive was just as good, if not better than my usual diesel vehicle and the responsiveness literally left my old car lagging far behind.

You can switch to the Sport driving mode which offers speeds of 0 to 100km in just over 8 seconds, but really, the Normal driving mode offers the best of all driving experiences with all the extra oomph without seriously impacting range.

On the drive home nothing was spared. I ran the air conditioning, charged a phone and had the radio on and still had more than three quarters of the maximum range left by the time I reached home. At no time did I feel I was missing out on power. Acceleration was immediate and overtaking, even on hills, a breeze. 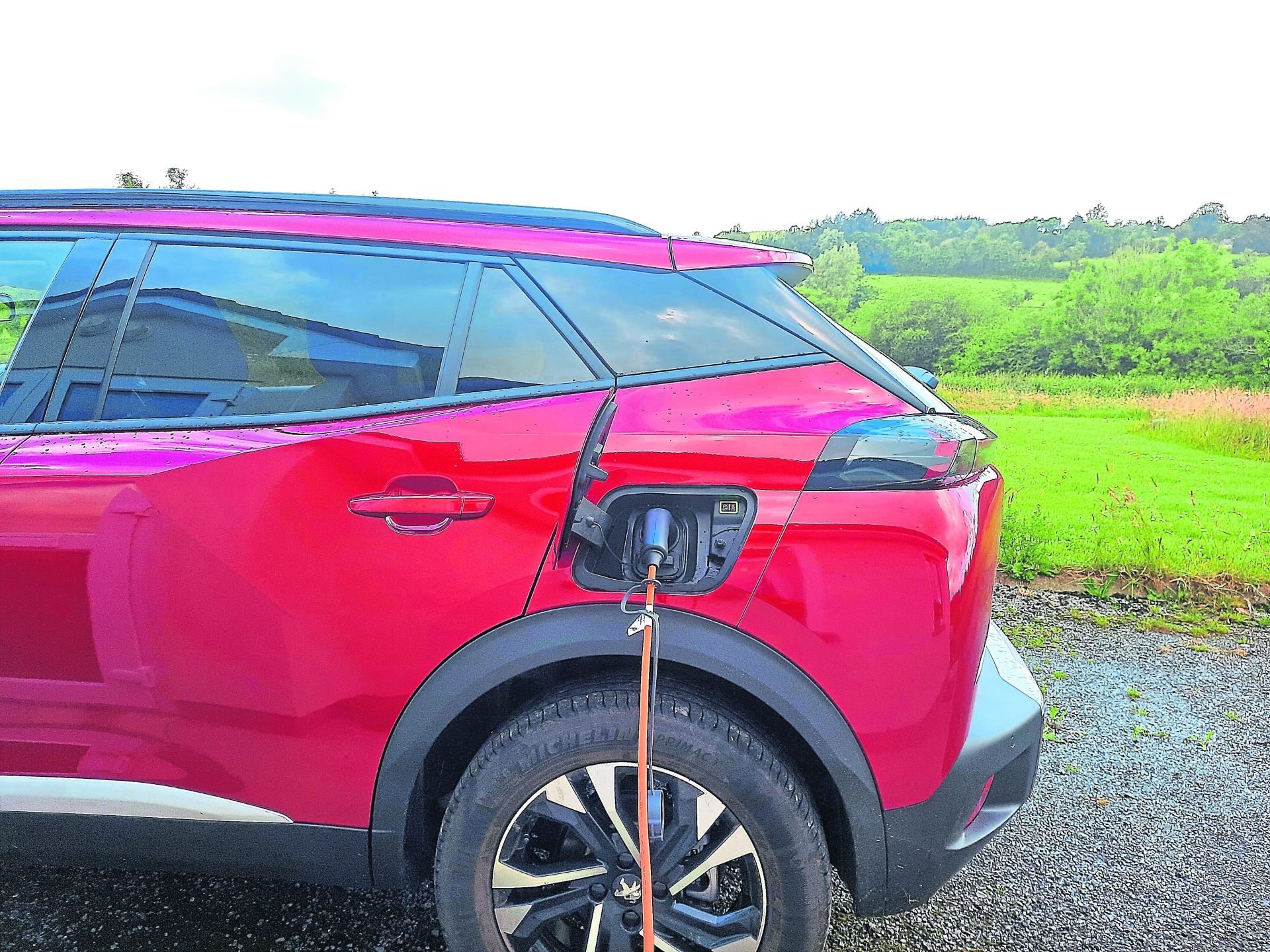 In fact the e-2008 took me to and from Carrick-on-Shannon, to and from Ballinamore and completed all those everyday drop offs and collections without costing me a thought. I didn't even charge it until the fourth night and at that stage I still had over 50km of driving range left.

Here I faced one of my greatest anxieties about EV's i.e. how to charge it. I needn't have worried as our test vehicle came with a neat home converter charger. You simply plugged it into a standard house socket and plug the remaining charge head into the charge point on the car - handily located where the petrol/diesel fill tank usually is -and then, just forget about it.

The charger is silent and has a flashing green light which slows down flashing and increases in brightness as the charge is completed. I simply plugged in the vehicle when I came home and got up the next morning to a full charge. No hassle, no worrying about whether I'd make it to a petrol station with the fuel light on. Just plug in, sleep, get up the next day and go!

Of course if you buy an EV you can also opt to have a wall charger installed at home and this offers an even faster charge experience in the range of 7.5 hours from empty to full. If you go to a public fast charge point you can achieve an 80% charge in just 30 minutes - that's enough time to grab a quick lunch and a coffee or do a quick shop!

But the reality is that you aren't usually filling a vehicle from empty, so the maximum charge times are all just that, the maximum amount of time it will take to top an EV up. I found that by topping it up just twice in the seven days I had the e-2008, at just a few hours each time - the car was always ready to go and I never had to worry about running out of charge.

And for those skeptical individuals who point out, quite rightly, that there aren't that many public charge points in Leitrim so maybe, an EV isn't a great option for rural life, I'd like to say just one thing to this, you are wrong. I live in nearly the furthest part of South Leitrim but my work takes me regularly to North Leitrim and I did those trips to Manorhamilton, Dromahair, Drumkeerin, Sligo, Ballinamore, Mohill, Leitrim Village and more without ever worrying about running out of charge.

The reality is that, unless you are travelling extremely long journeys on a daily basis and by that, I mean over 250km each day, you don't need a bigger capacity. You have the domestic power point, if you are making a longer trip i.e. Dublin, you can easily top up at public e-car charge points en route taking just a short time to charge to full.

Best of all, we're talking about only costing a handful of euros each time to charge your car. Have you seen the cost of diesel and petrol these days? We've seen a standard fill of diesel rising from €55 to €70 in just a year.

Add to this the fact that you can recoup extra charge by driving more mindfully and you can stretch the range even further. For example, each time you brake, you recover charge, the same when you ease up on the accelerator, such as when you are heading down hill. Keep the e-2008 in Eco mode and I found you barely compromise on performance and can achieve up to 324km in range.

If you think I'm a hard sell on EV's then you haven't met my husband. He's a qualified motor mechanic and while he's moved to an automatic he's still a diesel fan. Even he was impressed by the e-2008. How impressed? There were several times when I went to drive it and found he'd beaten me to it. Leaving me with his car. And he wasn't the only one surprised by this EV.

Family, friends, work colleagues who got a chance to drive it were all surprised by just how responsive the e-2008 is. It really is a pleasure to drive.

And I can't fail to mention one singular thing about EVs, the silence. Yes, you will have a moment where you aren't sure whether you have switched it on or not - I certainly did. Thankfully for the safety of pedestrians the e-2008, like other EVs, has been fitted with an acoustic vehicle alerting system - which activates at low speeds so people are aware of what would otherwise be a silent vehicle.

There is also MYPEUGEOT® App which you can download to your phone to allow you to check how much charge is in your EV remotely as well as to plan and launch charging remotely. You can also remotely control the heating or air and the app also provides you with consumption logs and statistics.

I admit the PEUGEOT i-Cockpit® compact steering wheel was a little strange as you look over, not through it to see the dash but you quickly adjust and it actually was more comfortable to use than a standard steering wheel, especially on longer journeys.

But if you really want to know for yourself just how brilliant this car is. Just try it for yourself.

I was a committed diesel driver, but I can tell you, my driving future is most definitely, electric.

SOME OF THE FEATURES: