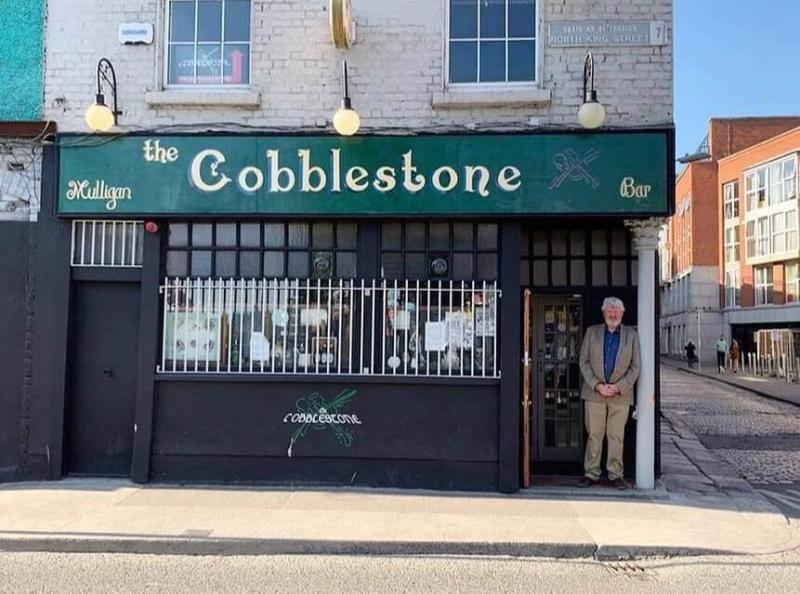 Tom Mulligan outside The Cobblestone Bar

The controversial plans to redevelop parts of the Cobblestone pub in Smithfield in Dublin have been refused by Dublin City Council.

The pub was established by the Mulligan family from Bornacoola in Leitrim and is widely known as one of the most famous trad music bars in the country.

Marron Estates had applied to the council for permission to construct a nine-storey hotel at 77-80 North King Street.

The development would have meant the partial demolition of one of Dublin's most famous traditional music pubs.

Hundreds of objections were lodged with the council and demonstrations were held to save the pub and two protests took place in the city last month against the plans.

Refusing planning permission the council stated the development would be "overbearing and significantly out of scale and character with the prevailing architectural context".

It said it would represent "substantial over-development of a highly sensitive site" and some of the destruction needed for the project would cause "unacceptable loss of historic fabric".

It also said the proposed nine-storey development would be "unduly dominant" and "visually incongruous" in the current streetscape of three or four storey buildings.

The council also said the plans were contrary to the development plan policies for supporting culture because it would result in the loss of the existing Backroom venue.

It said this "has developed as a space for teaching, rehearsal and performance for traditional music to the rear of the Cobblestone public house, and which is considered to make an important contribution to the cultural offering in the area".