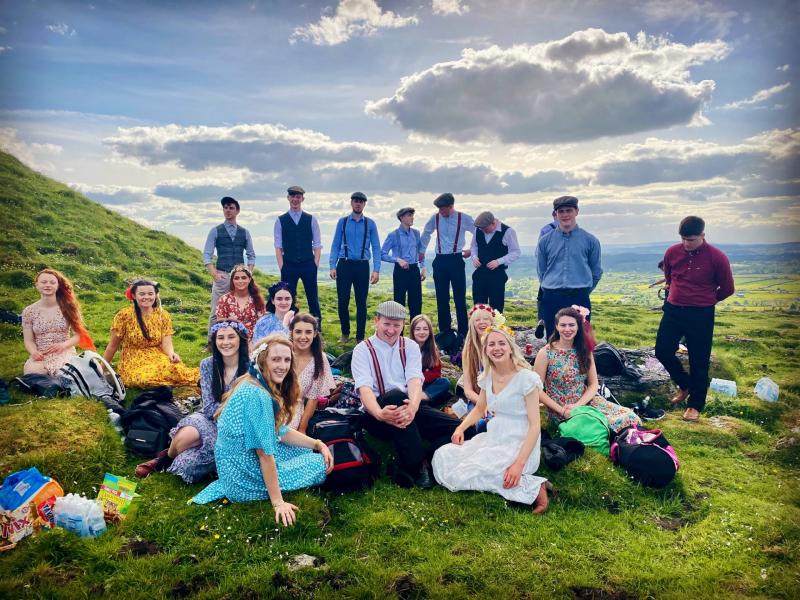 Dancers on the top of Sheemore

Steps of Freedom - a documentary on Irish Dance by Ruán Magan premiered on RTE1 last week with part 1, now the second part airs tonight December 23 on RTE 1 at 10.15pm.

Many of the dance scenes were curated by Sean Nós dancer Edwina Guckian and shot over the June Bank holiday weekend  this year on Sheemore and in fields around Effrinagh.
It also involved many of the local dancing and music community from across Leitrim.

Steps of Freedom, produced by Tyrone Productions is a major entertainment documentary telling for the first time the extraordinary story of how Irish dance developed over centuries from a traditional dance of the Irish people to become the global phenomenon.
Long ago, Irish dance was something that took place in people's homes and small cabins, often to mark significant personal moments, weddings, baptisms, funerals or just to have a bit of craic.
Today, with shows like Riverdance and Feet of Flames, Irish dance has reached audiences of over a billion and is taught in over 50 countries around the world.

Few who saw it will forget the moment Michael Flatley charged across the Eurovision Song Contest stage to perform Riverdance in 1994.
Irish dance shares aspects of the dances found in France, Spain, Scotland and Africa. those cultures. It is a hybrid form, but as dance historian John Cullinane notes our percussive style "has the fastest footwork of all the dances in the world".
The documentary will be aired in the United States, on ARTE across Europe and the BBC in 2022.

The scenes from Sheemore and Effrinagh are breathtaking, the local troupe of dancers show off their moves as the Leitrim scenery unfolds around them.
If you miss it you can catch up on the RTE player.

Christmas Movie Quiz - How well do you know your festive films?