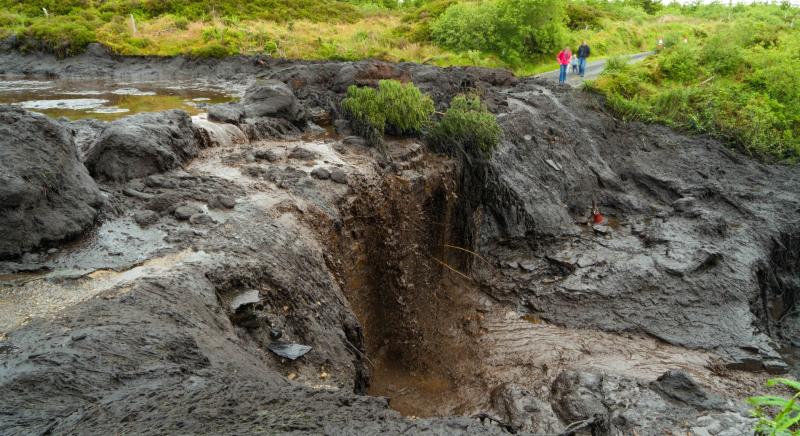 Twenty four months on from the Shass mountain landslide, farmers still cannot harvest their land and have not been paid the compensation promised by the Government.

The issue of compensation has come up at local and national level several times, and arose again this week when Cllr Mary Bohan asked for support from her fellow Manorhamilton area councillors to call on the Department of Agriculture and the Department of Public Expenditure and Reform to expedite the compensation measures for farmers affected by the Shass Mountain landslide.

The Drumkeerin councillor said she spoke to the Minister for Agriculture, who visited Leitrim recently, and he said his department had approved the compensation.
While there have been plenty of promises, farmers are still without compensation two years on from the dramatic event, which saw 170,000 tonnes of peat deposited on lands.

Cllr Bohan said she does not understand the reason for the delay as “there is precedent for compensation.” She said farmers cannot use their land to harvest fodder again this year, they have suffered a major loss and “are continuing to suffer a loss.”
She stressed this issue “should be a priority.” As she understands it, the Department of Agriculture has approved the compensation but the Department of Public Expenditure is seeking approval “from deeper.”
Cllr Padraig Fallon informed the meeting that he was speaking to an affected farmer on Monday morning who said “you would still go uo to your neck” in the bog land, it is that wet.
The landslide travelled over 7km and affected 29 hectares on June 28, 2020.

An area of upland blanket bog, including an area of the adjacent forestry plantation, moved downhill.
As a result liquefied peat, vegetation and trees slid downhill towards the Difagher River and down towards Lough Allen. The resulting slide inundated the Dawn of Hope bridge with the slippage travelling some 7km downstream inundating farm and forestry land.

The matter was last raised in Dáil Eireann by Deputies Marian Harkin and Michael Fitzmaurice in April this year.
It was revealed that 20 farmers and eight foresters had been impacted by the landslide.
Force Majeure has been used to allow farmers to receive agricultural payments and grants, but the Dáil heard this cannot continue.

Minister of State Sean Fleming had informed the deputies “with regard to the compensation of landowners (the Minister for Agriculture's Department) does not have a contingency fund. Any ex gratia payment will have to be sanctioned by the Minister for Public Expenditure and Reform.”
The most recent update was that both departments are “engaging regarding a compensation package, details of which should be finalised shortly. Once the package is agreed, Department officials will contact the affected landowners.” But the wait continues for farmers.