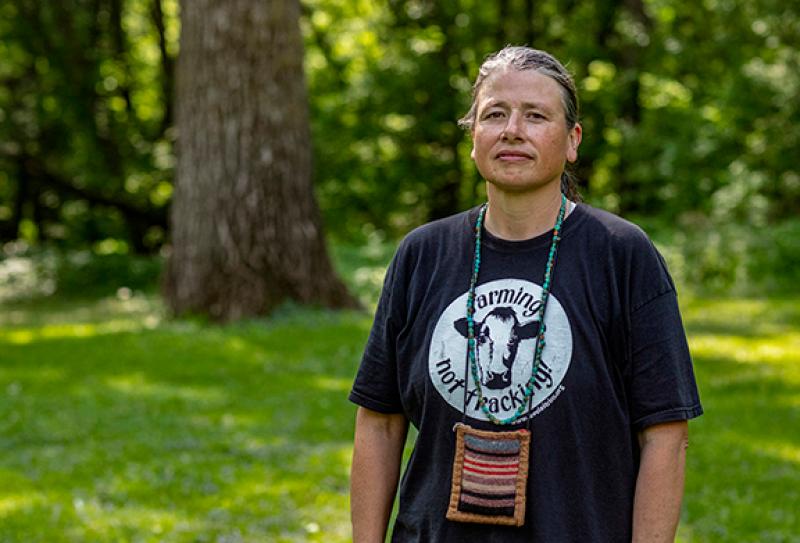 Chas Jewett, one of the Native American Water Protectors who will Leitrim this weekend Picture: John Kaul

From Saturday, July 16 to Monday, July 18 a group of Native American Water Protectors will visit Leitrim as part of the Making Relatives initiative which will see the group go to communities across the country on the frontlines of resistance to extractive industries, in particular the mining industry.

Along with Leitrim the other areas the group will go to include communities in places such as the Sperrins in Co Tyrone, Inishowen in Co Donegal while they will also undertake a ceremonial water walk along the River Foyle in Derry.
It is organised by a range of community groups and activists involved in environmental and social justice work on the island of Ireland.

This is not the first time that connections between community campaigners in Ireland and indigenous peoples in the United States have been made.
In 2016 local farmers in Leitrim showed solidarity to the plight of tribes affected at Standing Rock by the construction of the DAPL pipeline with an action that received national and international acclaim. That action involved a photo taken at Eagles Rock with the message "From Eagles Rock To Standing Rock - No DAPL". The photo went viral.

Now in an act of solidarity Chas Jewett a Lakota Water Protector who was part of the campaign at Standing Rock opposing the DAPL pipeline is coming to Ireland to help support communities in Ireland threatened by extractive industries.
The threat of extractive industries has been a prevalent one in Leitrim in recent years with the long campaign to ban fracking and most recently the decision by Minister Eamon Ryan in April this year to grant prospecting licenses to gold mining company Flintridge Resources for 47 Leitrim townlands.

As part of the visit a number of different activities at a variety of locations have been planned. These include a Pot-Luck Dinner Meet and Greet on Saturday, July 16 from 5.30pm at An Fulacht Fiadh Cafe in Manorhamilton while an Open Mic special event 'The Sound of The Water' will take place the same evening, also at An Fulacht Fiadh from 8pm with a range of singers, musicians and performers.

On Monday, July 18 at 10.30am The Organic Centre in Rossinver will host the Native American Water Protectors celebrating a shared vision to protect our environment, with a warm meet and greet, a tour of the garden's and grounds, demos and entertainment.
They will also be joined by guests including their farming for nature nominee and Treasure Leitrim spokesperson James Gilmartin and master weaver Tom O'Brien. Signs for farmers/landowners who wish to refuse access to those engaging in prospecting for gold will also be available at the Organic Centre. 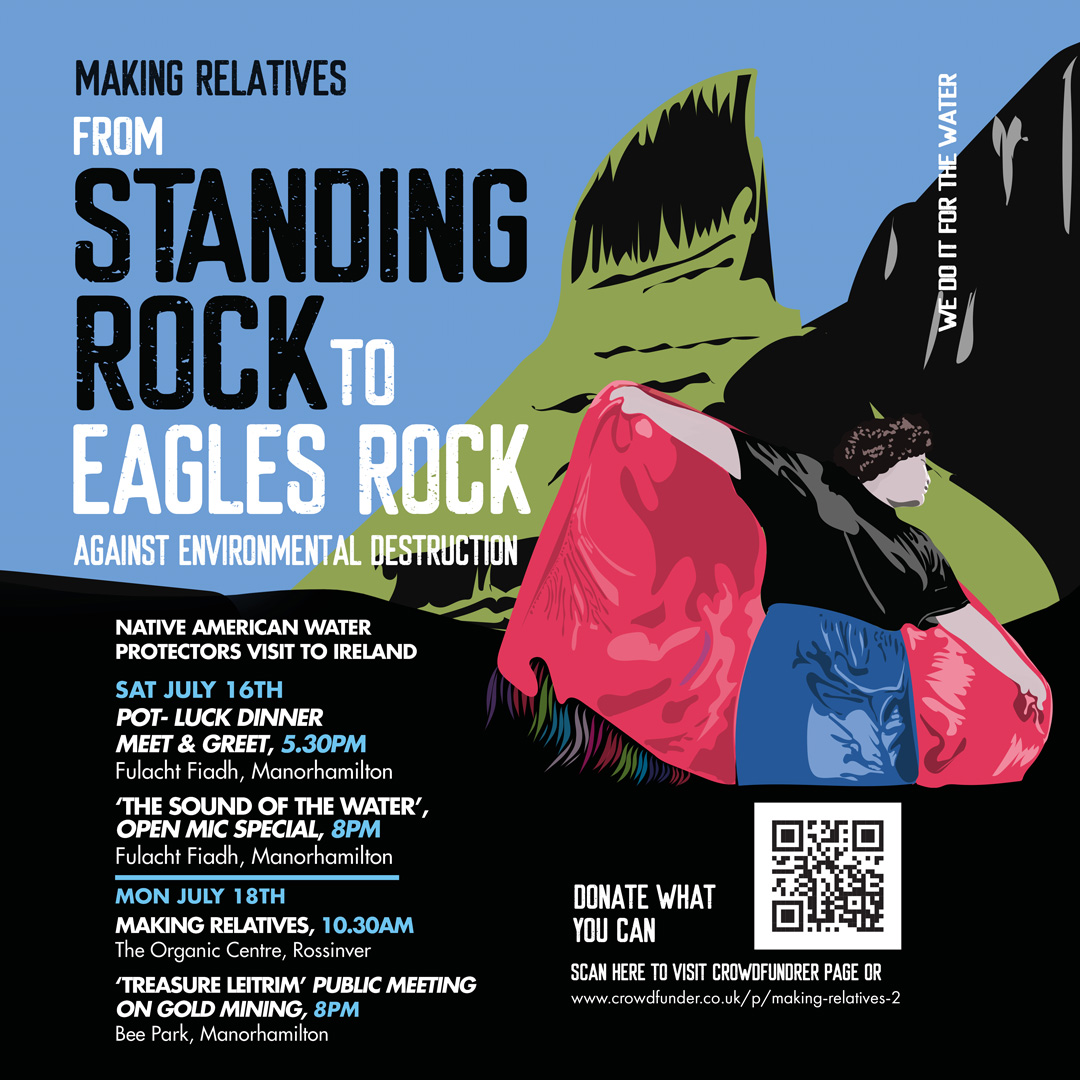 On Monday night at 8pm Treasure Leitrim will host a public meeting on the threat of gold-mining with a number of contributors including Chas Jewett and Fidelma O'Kane and Cormac McAleer from the Save Our Sperrins group in Co Tyrone.
The public are very much welcomed and encouraged to attend all the events over the three days and extend a warm welcome to the visitors.

Chas Jewett speaks of the importance of the visit: “Since the encampment against the Dakota Access Pipeline in 2016, Lakota people have been positioned on a world stage to continue the challenging work of reconnecting earth’s people to earth through traditional lifeways.

“At this time of earth-wide ecological disaster, it is past time for us to re-establish and reconnect with her. It’s time for us to learn from those who are still in connection with those relationships.

“We want to bring protectors from the Oceti Sakowin, knowledge keepers, ceremony leaders, our youth, brilliant artists to Ireland to share modern day resistance/existence strategies and tactics in reality,”

Jamie Murphy from Treasure Leitrim said “This visit by members of indigenous communities in the United States who have faced and continue to face the threat of extractive industries is a wonderful opportunity for us to share experiences about the common global struggle against companies that are seeking to gain a foothold in our communities.

“Whether it's at Standing Rock in North Dakota or Leitrim it is a common threat we face. International solidarity was a key part of the campaign to deliver a ban on fracking in Ireland and we have no doubt that this same solidarity will be key to making sure that, despite Eamon Ryan's decision to grant prospecting licenses, we will also make sure that the gold mining industry doesn’t get its feet on the ground here.”