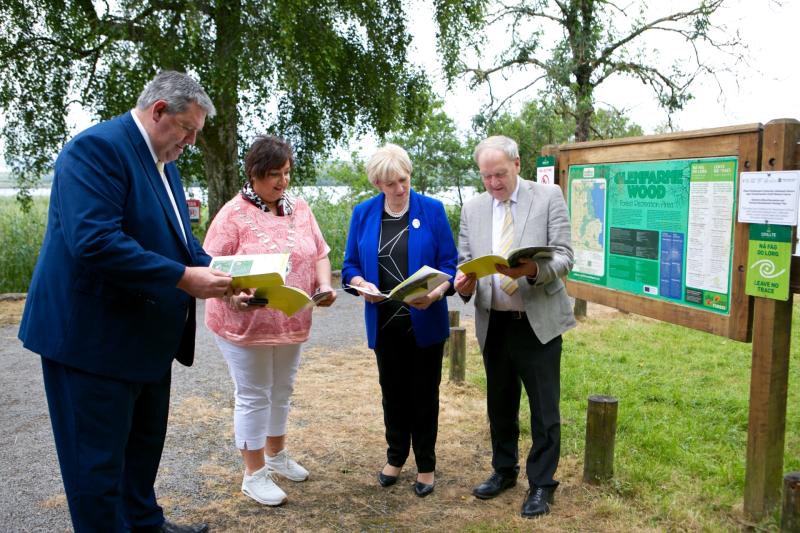 Checking out the new plan following the launch in Glenfarne

An ambitious Recreation and Tourism Development Strategic Plan has been launched for Glenfarne Wood.

Mark Carlin, MD Coillte Forest, said the launch of the plan marked a “special day for recreation and local tourism but also for Glenfarne Wood.”

“This plan is clearly going to deliver a exceptional recreational  resource for Leitrim and for Glenfarne,” he said,  acknowledging that finding a “balance” for this type of development is crucial.

He pointed out that visitor numbers for forestry recreational sites tripled during the pandemic and still remain high months after the lifting of restrictions.

“The pandemic has brought people back to having staycations, to visiting nature and visiting their local forest,” he said.

Observing that Coillte is the “leading outdoor recreation provider in Ireland”, Mr Carlin said local relationships are “key” for the successful delivery of projects adding that Coillte is about forests for “wood, for nature and for the people”.

He said that Coillte is committed to working with Leitrim County Council and the local community to create a plan which not only maximises the potential of Glenfarne Wood but also recognises and protects the unspoiled beauty and natural biodiversity of the area.

The plan outlines proposed development to be carried out in a series of five development stages starting with a preparation stage.

The second development stages are aimed at enhancing parking at the site as well as the creation of initial small-scale play and sensory areas and the installation of interpretive signage.

The final three stages will incorporate the development of destination scale facilities, the introduction of small-scale commercial activity and plans to link the woods with the nearby Sligo Leitrim Northern Counties Railway Greenway development.

These stages will be “actively pursued through funding applications and commercial provider engagement,” the plan notes.

Launching the plan, Minister for Social Protection and Rural and Community Development, Heather Humphreys paid tribute to Coillte and the local community for their “special amenity” that is Glenfarne Wood.

She noted the €20,000 in funding provided through her Department for the development of the plan and said that she believed it will “unlock the potential at Glenfarne Wood, making it an amenity for all ages”.

Describing the site as a “hidden gem here in North Leitrim” she pointed out that “forests are one of our most important  national amenities”.

“I am very excited about what is contained in this plan  for Glenfarne Wood and I commend Leitrim County Council and Coillte for beginning this journey, in conjunction with the local community”.

Minister Humphreys also praised The Rainbow Ballroom of Romance acknowledging the success of the local community in securing major funding, despite their small size.

Noting the Glenfarne Wood masterplan, Cllr Sean McDermott said that 30 years ago development was supposed to take place in Glenfarne forestry, “unfortunately this didn't happen, but we will make sure this does happen”.

He also made a special presentation of a picture frame, made from the original wood which once made up the floor of the famous Rainbow dancehall, to the Minister.

He joked that there are “a lot of links with Monaghan and the Rainbow” noting that the dancehall gave well-known singer, Big Tom his “first big break” in the big dancehalls of the era.