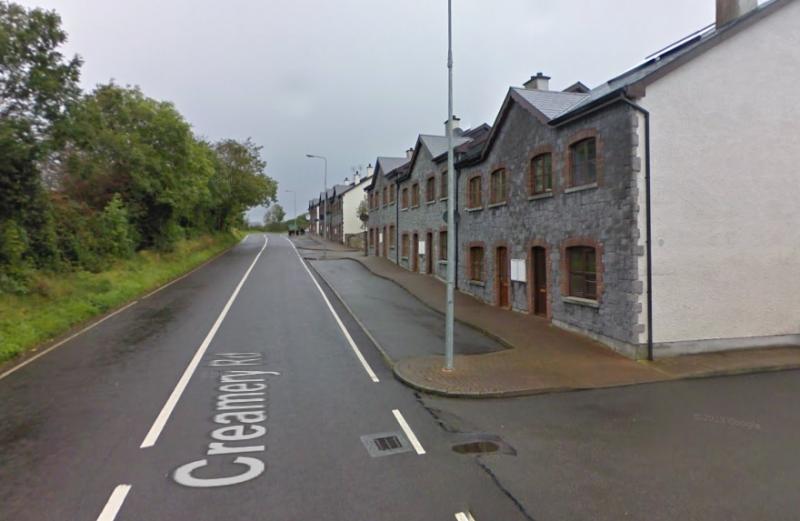 Independent county councillor, Felim Gurn, said he “may have nine lives but I've used up eight of them” with near misses arising from traffic exiting the Amorset roundabout on the R280 in Manorhamilton and speeding along Creamery Road.
Cllr Felim Gurn highlighted concerns over the traffic layout in this location at the recent Manorhamilton Municipal District meeting saying the situation “has gone beyond a joke”.
The Independent councillor said that as recently as the previous night he had “almost been mown out of it”.
“I have nine lives and I have used eight of them at this stage,” he observed.
He said that the amount and speed of traffic coming from the Bundoran and Lurganboy roads and the speed of traffic coming along Creamery Road, “has made it unsafe for residents trying to exit the car parks at the back of Creamery Road.
“The line of vision for cars exiting these carparks is impaired for upcoming traffic, by cars parking at the front of the houses and limiting the vision of cars as well as heavy goods vehicles using this access road to Sean Mac Diarmada Street from the roundabout,” he said.
The Independent councillor suggested the use of speed ramps to slow traffic down noting “the use of road strips has not worked.”
“I know that some people won't be happy about the suggestion of putting in ramps but this is dangerous and we need to act now before there is a serious accident here,” he said.
His motion was backed by Cllr Sean McDermott who added “Cllr Gurn is right. You have to be well out on the road before you get a clear view of oncoming traffic. It isn't safe.”
Cllr Justin Warnock also backed the call for traffic control at this location noting “at one stage we were talking about changing the traffic flow at this location. Something needs to be done.
“It is a very built up residential area.
“Felim is right if you are in Creamery Road and you are making a turn you are blinded. You have no sight line, so you have to edge out into traffic. It is very dangerous,” he noted.
Cllr Warnock also took the opportunity to again call for a new traffic management plan to be created for Manorhamilton.
Cathaoirleach, Cllr Frank Dolan, asked if there was any way of removing the parking causing the sight obstruction for this area, but Cllr Gurn noted that the residents of the homes in this area had no private gardens and they had no option but to park where they were currently doing so.
Director of Services, Mary Quinn acknowledged that the road design team had held a number of meetings to discuss this problem area.
She said that the problem was challenging but that she would take the concerns of the councillors back to the road design team to see what could be considered.
Cllr Gurn thanked Ms Quinn and asked that the matter be addressed as soon as possible, “before there is a serious accident at this location,” he urged.