Protestors call for full restoration of services at Manorhamilton AIB 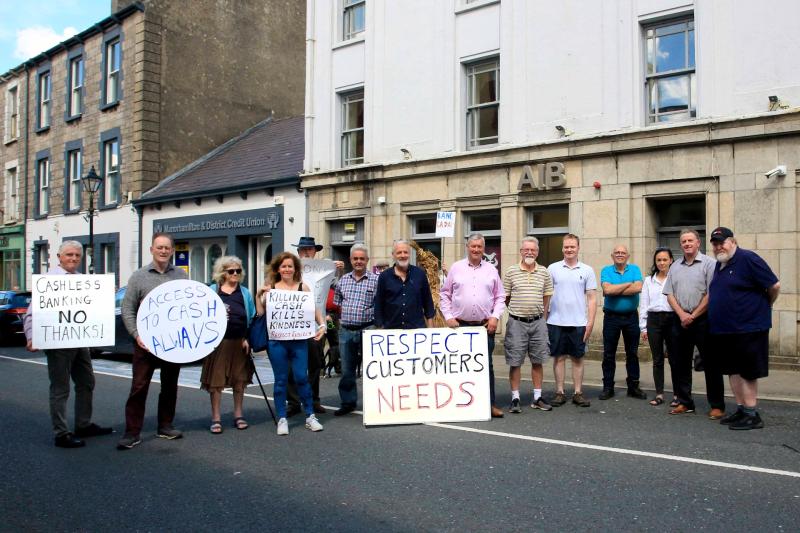 A protest was held outside of AIB in Manorhamilton last week and those assembled also handed in a letter to the branch manager calling for full restoration of cash services at the branch.
Services at the branch were reduced in December last year. Cash can be still be deposited and withdrawn in the branch but only via machines available in branch. All cashier services at AIB Manorhamilton have ceased.
Following last months u-turn by AIB on its plans to turn 70 of its branches into cashless facilities, people in the Manorhamilton area say that AIB must also reverse the changes put in place at the Manorhamilton branch in 2021.
Protestors gathered outside the branch for an hour on Thursday, June 28.
Holding placards urging IAIB to respect the wishes of local customers they also expressed a similar wish in the letter presented to the manager of AIB in Manorhamilton.
The letter, which protestors also supplied a copy of to the Leitrim Observer said:

We the people of Leitrim area and representing the views of all the people of Eire strongly urge you to continue to provide the services your local customers need. We cannot support banks who do not respect their customer base and so it is in your best interests, to provide the services necessary. Cashless banks do not serve the public and this trend needs to be reversed. Cash needs to be available at this branch.
We remind you it is our money that pays your wages and determines your share price.
We remind you, we bailed you out.
We remind you, we own two thirds of AIB bank.
WE remind you, we are your customers.
We look forward to a speedy resolution to this situation and an announcement that customer’s best interests remain yours too. You customers await your decision.

Signed by a few, representing the many.

Three local councilors, Cllr Felim Gurn, Cllr Sean McDermott and Cathaoirleach of Manorhamilton Municipal District, Cllr Frank Dolan also attended the protest on the day and
A spokesperson for the group noted the “huge profits” announced by AIB last week and said it is “vital” that all local people, local groups, businesses and the media keep the focus “ on this shameful situation and force its reversal.”
He said that the manager of AIB Manorhamilton had assured protestors that the letter would be passed on and a reply would be secured as soon as possible.