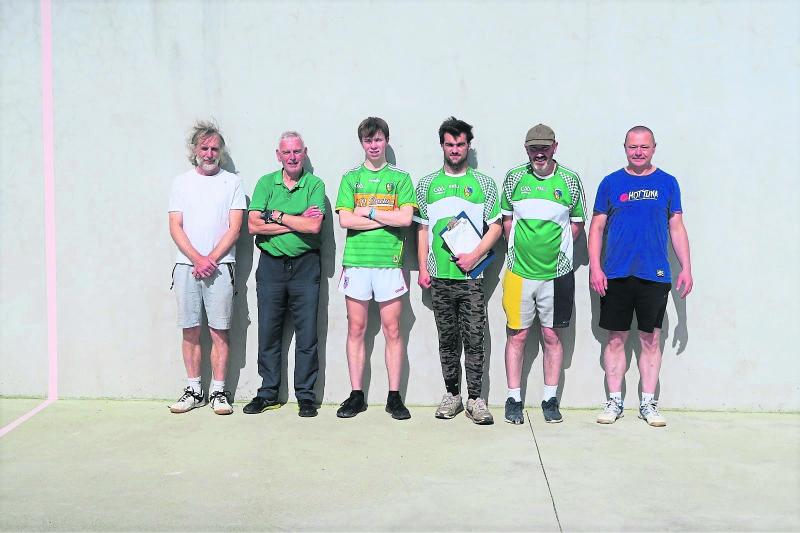 The recently reconstructed Bee Park state of the art Handball Alley was the perfect setting earlier this month for a top class Irish handball tourney that was hosted by the dynamic Glencar Manor Handball Club.

In a report on the successful tournament, a spokesperson for the club says that “Manorhamilton and Friends hosted a Rest of Ireland Select on Saturday, August 6 as part of Croke Park’s Summer Handball Series.
“Matches were played to fifteen with each doubles team playing two games and each score counting towards the team total. Conn MacGabhann and Martin Corr, both originally from Tyrone, took on Manorhamilton’s Peter Boyle and Tristan Otto.
“Peter had recently won the doubles plate in Cully alongside Michael Bruen at the Gerry Coleman memorial tournament but the experienced Tyrone pair, who have performed well at provincial level, pulled away from Tristan and Peter to win by 30 points to 16.

“Manorhamilton native Darragh Stewart was paired with Annaduff’s Benôit McKiernan against Tyrone man, Johnny Smith and his nephew Na Fianna’s, Eoghan Cooney. This time there was nothing between the teams as Johnny Smith (who has an underage Tyrone county hurling title from the 1980’s) rolled back the years to produce a number of scintillating kills from the back of the alley.
“Eoghan Cooney meanwhile produced a number of classy side arms but there was no doubting the intent of fifteen year old dual player Benôit McKiernan to make a mark with his partner Darragh Stewart. In the end it was all square as both teams accumulated 25 points.

“Next up for Manorhamilton was Joel Smith and Anthony O’Flynn against Michael Bruen of Collooney and Na Fianna’s Fiachra Cooney. Playing in their home court the Manorhamilton duo used all their experience to balance up the score with O’Flynn, originally from Kilkenny, playing some stylish shots, so that at the end of the third match it was a 71 points for Manorhamilton and Friends win against 68 for the Rest of Ireland.

“The real story of the tournament though was when Ballyshannon’s Michael Gallagher togged out for Manorhamilton and Friends alongside Benôit for the final game against Collooney’s Patrick Fox and Paul Quigley.
“Fifteen-year-old Benôit and 81-year old Michael Gallagher (but looking twenty years younger) took on Patrick and Paul both in their twenties and while Benôit chased down long balls Michael Gallagher killed the ball repeatedly in the corner, as well as making sure that no ball passed him at the front of the alley.
“Michael and Benôit won the game securing a Manorhamilton victory. The organisers would like to thank Ruth Smith for the catering and hospitality as well as GAA Handball, the Sports Hub at the Bee Park Manorhamilton and all the players and spectators who travelled. Next tournament is Ballyshannon.”