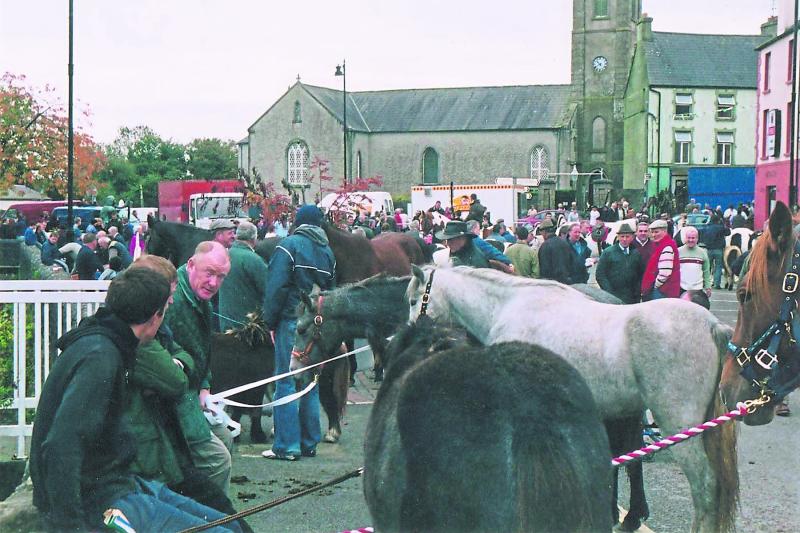 Mohill Horse Fair, one of the oldest fairs in Ireland with records dating back to 1620, finds itself on its last legs after a plea to Leitrim County Council for help with insurance was denied.

Cllr Thomas Mulligan, one of the organisers of the social and cultural one-day event, asked the local authority at the Carrick Municipal District meeting on Monday to include insurance cover for the festival as part of its corporate insurance.
He stated that the festival which returned with vigour and has continued for over 30 years could not get insurance. He said their previous insurers told them they will not cover the event “because of a break in continuity” during the Covid pandemic. He stressed it was not a matter of cost, but that the insurance cannot be secured.

He stated that Galway and Clare County Councils have stepped in to provide insurance for horse fairs in their counties and asked that Leitrim make an exception here for this event, which is the only one held in Leitrim and the only on-street event for Mohill this year.
Leitrim County Council said it is “not in a position to provide insurance cover to any event which is outside the control and responsibility of the Council.”

Cllr Mulligan said there is a team of volunteers in the town who are available to help with the organisation and clean-up of the event. In previous years volunteers were on site from 6am to 6pm to make sure the fair ran smoothly, he said.
He noted that the festival is so popular that last year when it was cancelled, it still went ahead unsupervised as people turned up with horses. It is understood that with or without insurance horse traders and spectators will turn up in Mohill and the event will go ahead “without any organisation.”
Cllr Mulligan was supported in his plea to preserve the event but the Council stood firm in its refusal.

Cllr Enda Stenson added that “Mohill doesn't get much funding” and it would be a pity to let this drop. Cllr Des Guckian said Mohill should get the help it needs while Cllr Paddy Farrell added the event is a “great boost for businesses” and Cllr Finola Armstrong McGuire said the event attracts young and old and supports businesses as well as a strong volunteer network. Cllr Sean McGowan also agreed it is a great day and should get all the support from the Council.
Director of Services, Joseph Gilhooly said the Council is supportive of Mohill and provides plenty of funding but they cannot insure a community festival. The local authority acknowledged and said it shares in the frustration over insurance issues.

Issue at SFC game
Separately, an insurance issue in Mohill over the weekend resulted in the changing rooms at Philly McGuinness Park being closed to Aughawillan and Mohill players in Saturday's the Leitrim Senior Football Championship game.