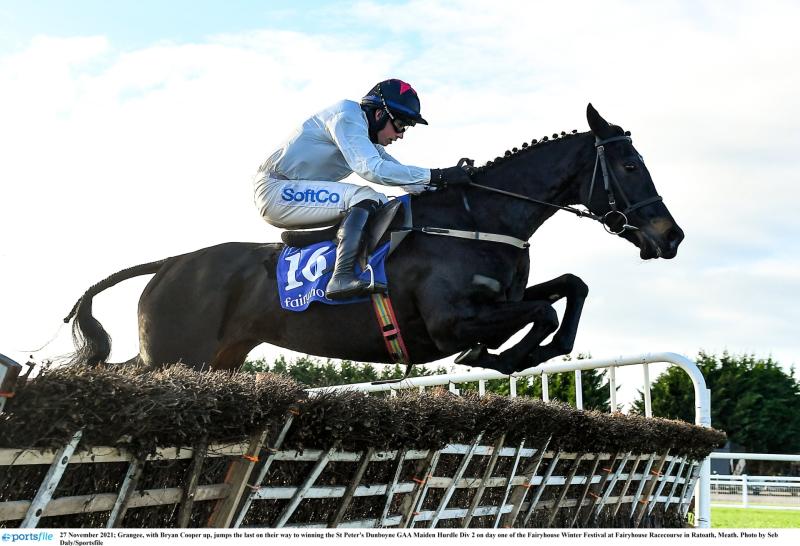 Grangee in action back in November PIC: Sportsfile

This is a competitive novice hurdle but Willie Mullins can get the better of both Henry De Bromhead and Gordon Elliott here with GRANGEE (7/2). Largy Debut is the favourite on the strength of a ten-length win over Kilcruit last time out but that may flatter him. Grangee was a nice national hunt flat here last year, winning at Leopardstown, Galway and Punchestown and could be well above average over hurdles after making a winning debut over obstacles last time out at Fairyhouse. Plenty is still unknown about this one but he has a good attitude and is in the hands of a top jockey and trainer.

This race is ideal for eachway backers and I've landed on TOP MOON (40/1) for Joseph O'Brien. Top Moon has been off the boil for quite a long time now with his last win back in July. He was pulled up in the Troytown at Navan last time out and fell at Listowel back in September. However, his run here back in February was a good one when he was second behind A Wave Of The Sea. He carried eight pounds more than the winner that day but saddles just one pound more than that rival today. He has plenty to do to get back on a winning thread but he can certainly run into the frame.

This isn't a particularly strong race and REAL STEEL (6/1) might just be good enough on a going day to get the job done. He held some pretty stellar company in 2020, beating the likes of Footpad and finishing sixth in the Cheltenham Gold Cup. He has fallen completely off the boil since then and the closest he's come to winning this year was 40 lengths behind Larry last time out at Ascot. His rating has been plummeting to its lowest level since 2018 and that gives him a chance, especially in this field where very little else jumps off the racecard.