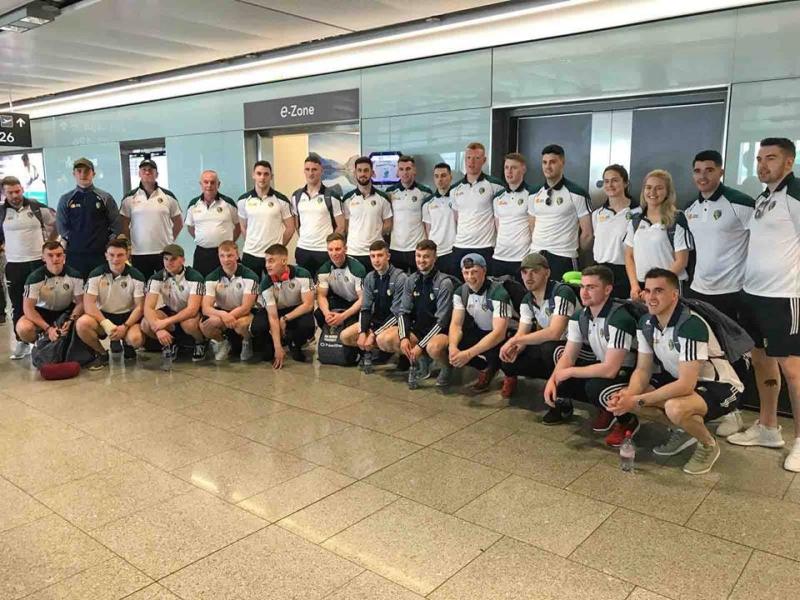 The Leitrim team and management pictured prior to their departure from Dublin Airport yesterday.

Little Italy is a neighbourhood in Lower Manhattan, once known for its large population of Italians and their associated businesses.

A few years ago a journalist from the Irish Independent smugly referred to the area where Katonah Avenue in the north of the Bronx abuts McLean Avenue in South Yonkers as Little Leitrim due to an enclave of successful Leitrim-owned businesses and a high concentration of Leitrim exiles.

Now it seems that the nexus of the McLean and Katonah area will undergo a population explosion this weekend as hordes of Leitrim supporters arrive for the much anticipated clash with the Big Apple squad.

The mass exodus of the natives is obviously being facilitated by the resurgent economy, plus Norwegian Air, in a Freddie Laker-like ploy from the seventies, has forced the major Trans-Atlantic carriers to drop their prices.

Word is that attics are being aired, basements decluttered, and pullout couches readied to accommodate the large influx of loyal Leitrim supporters. It appears that every effort is being made to put on a good show as varnish is being applied, dollops of paint here and there, plus hanging plants and flower beds are in full flourish. Nearly like a throwback to the days of whitewash and distemper, except that this time the Yanks are providing the hospitality.

The Leitrim businesses on McLean and Katonah Avenues have hoisted the Leitrim flags and there is plenty of the green and gold to be seen on the side streets.

The Trans-Atlantic trips undertaken by the respective Connacht teams have all the hallmarks of the Gathering concept which came into currency in 2013, the last year that Leitrim were in New York.

That year to coincide with the game, there were all sorts of reunions among the Leitrim diaspora and the natives from the county. On the Friday prior to the game a battalion of Leitrim Gaels are heading to the Big Apple and are hosting a reunion/fundraiser in Rory Dolan’s on McLean Avenue.

Though Rory Dolan is a Cavan man, his partner is Joe Carty, from Aughavas. Two stalwarts form the County Leitrim Society, namely Mary O’Keefe and Willie Reynolds will be honored at the function in recognition for their fundraising efforts when the club was established twenty years ago.

On Saturday there are two games in Gaelic Park. The first features a team of well-seasoned, over forty squad from Leitrim taking on a team of similar vintage from the Big Apple.

The second game pits Kiltubrid against the Leitrim New York squad. It has been reported that Joe McGirl and Frankie Dwyer may be making cameo appearances for their former team, while Michael James McKiernan is anxious to get another run out in Gaelic Park where he dazzled the patrons almost half a century ago with his blistering speed and penetrating solo runs. Of course that depends on the auld hamstring holding up.

Then when the action finishes all hands head to Rory Dolan’s where a medley of events are being staged by the Leitrim Supporters’ Club in conjunction with their counterparts in New York.

Colin Regan, a former Leitrim player and journalist will host an “Up for the Match” panel discussion. Among his guests will be John O’Mahony, who managed Leitrim to a Connacht title in ’94, and Galway to two All-Irelands.

Seamus Quinn, a Leitrim All-star from ’94 and current selector is also featuring in the programme. Some will remember the gigantic tussle that Seamus and Kenny O’Connor, aka Big Bird, had when they clashed in ’03.

Representing New York will be Mike Carty, Frank Dwyer and Frank Brady. There will also be a presentation on the state of the art Centre of Excellence in Annaduff by Eamon Duignan.

A special feature of the presentation will be the concept of “The Leitrim Wall” where people from all over the world will be able to contribute to the Centre, and recognition of that contribution will be literally set in stone, via a brick.

In addition, Declan Bohan will give an update on the coaching initiatives in Leitrim.

Aside from GAA related issues, Paraic White, a former managing director of the IDA will give an update on business plans and progress in Leitrim. Fittingly allied with that will be a dram or two of the famed Drumshanbo gin to oil the pallets. There will also be some music rendered by the Rodican, Finneran and Fowley families.

Then on Sunday evening once the game is over, and hopefully mission accomplished, there will be a “meet and greet” the Leitrim team at the Rambling House, on Katonah Avenue. This very fittingly named premise is owned by Joe Carty (Aughavas) and managed by his daughter Tara.

Later in the evening it’s across the street to another well-known Leitrim establishment, Behan’s, with John Creegan, (Aughavas), as proprietor. Incidentally John’s son, Michael is a member of the New York panel.

Evidently, Sunday will be a busy day on several fronts, but events will wind down at JP Clarke’s on Monday, where the proprietors. Seamus (Gortletteragh) and Caitriona (Drumshanbo), staunch Leitrim supporters will host a barbecue for the team.

Meanwhile, New York are quietly optimistic as training has gone well plus they have assembled a very strong panel with several of the players having some intercounty experience.

Incidentally, New York had an emphatic win, 1-20 to 1-7 over All –Ireland club champions Corofin with Jamie Clarke (0-9), David Culhane (1-2), Kevin O’Grady (0-1) and Vinnie Cadden very impressive. Some will have memories of Clarke torturing Leitrim a few years ago in the Qualifiers. However it is difficult to gauge the import of the victory as Corofin were in tour mood.

There are a few in the New York panel with strong Leitrim connections among them are Fergal Ellis (Fenagh), Mike Creegan and the trainer Enda Williams, who was on the Leitrim squad the last time they played in New York.

Now he is the trainer of the Big Apple squad and many feel that his role is more extensive, as he came on as a sub against Corofin. So perhaps he might like to get a shot at his former team.

Williams has already played with Longford, so if he enters the fray, this would be his third championship team. On the other side of the coin, Eoin Ward is back playing with Leitrim after having had several stints with the New York team.
There could be a little intrigue on both sides.

Donal preaches caution ahead of 'business' trip to Big Apple

A privilege and an honour to play with Leitrim