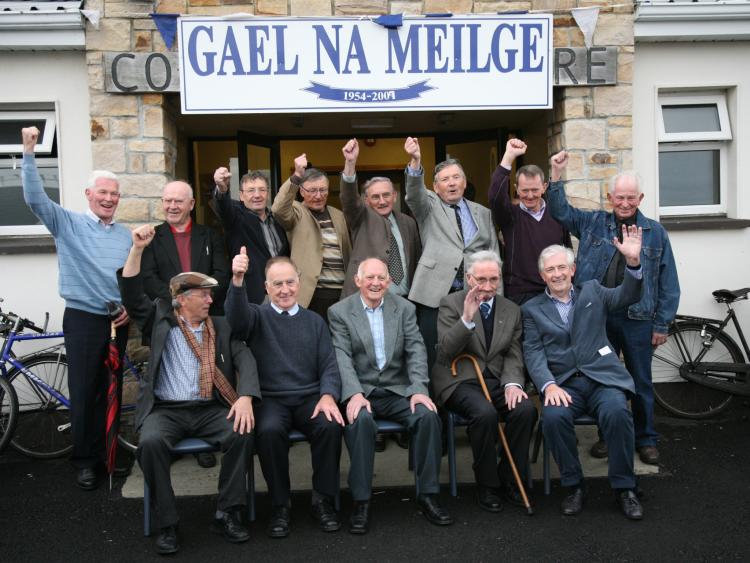 Gabriel O'Malley, pictured back row, second from right at the 50th anniversary celebrations for the 1959 Senior Championship winning team.

One of Leitrim’s and Melvin Gaels outstanding footballers of the 50s and 60s, Gabriel O’Malley passed onto his eternal reward on Thursday last, August 23 at Beaumont Hospital Dublin.

Kinlough native Gabriel was a former Dublin based member of An Garda Síochána. During his playing career Gabriel won five Leitrim senior football championship medals with Melvin Gaels in 1959, 1960, 1961, 1962 and 1965.

Gabriel would have played often in football games in the old Bee Park in the 1950’s and 1960s, including in the famous and very popular Féis Chluainín annual competitions that featured all the top North Leitrim teams of that era.

He regularly attended Melvin Gaels V Glencar/Manorhamilton games over the years irrespective of where they were being played whether in Melvin Park Kinlough, the Bee Park or Páirc Seán MacDiarmada Carrick-on-Shannon.

Gabriel’s late brother, Kevin was also an excellent Melvin Gaels and Leitrim player in the 1950s and 1960s.

His remains reposed at his family home in Portmarnock Dublin on Saturday afternoon, August 25 and at Our Lady’s Hospital Chapel Manorhamilton on Sunday evening, August 26 prior to their removal later that evening to St. Clare’s Church Manorhamilton.

Pictured above at the golden jubile celebrations for Melvin Gaels 1959 team in 2009 are some of the members of the 1959 team in Kinlough for the celebrations. Back row from left: Martin Collins, Patrick McGowan, Kevin McGowan, Pauric McGowan, brendan McGowan & Martin McGowan, Gabriel O'Malley and Jimmy Kelly. Front row from left: Terry Tiffoney, Michael Mcgowan, Jackie Gallagher, Aiden McGowan and Pauric White.

Melvin Gaels get the job done