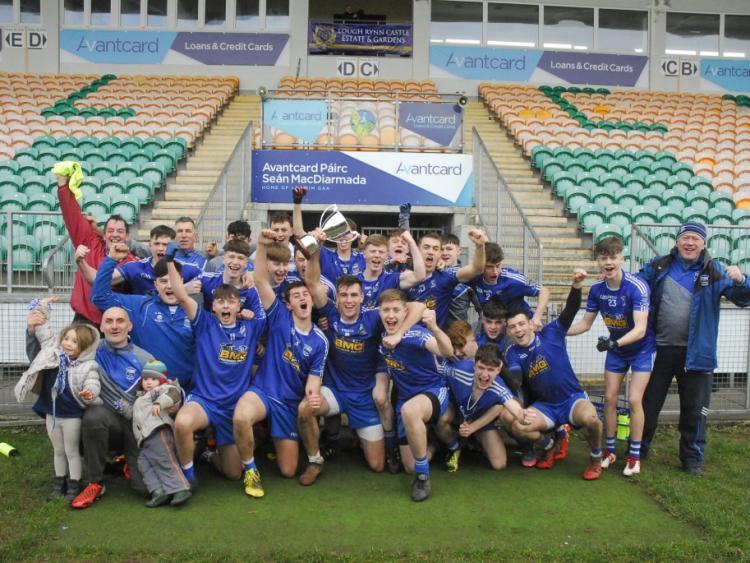 A strong finish by Melvin Gaels ensured a win for them at the end of Sunday’s evenly contested and entertaining first ever Leitrim U20 ‘A’ football final played in excellent, if slightly cold, Páirc Seán weather conditions.

St. Manachan’s had been well on top in the opening quarter and forced Melvin Gaels to play second fiddle in this period. The North Leitrim men re-organised their forces in the second quarter and got their noses in front by the halfway mark.

Melvin Gaels went further ahead after the restart but St. Manachan’s pegged them back and grabbed a two point’s lead by the three-quarter stage.

In the final quarter Melvin Gaels threw everything into the fire and turned the tables on St. Manachan’s, whose challenge wilted somewhat in the final five minutes of the action.

Two minutes later Jordan Reynolds equalised with a St. Manachan’s free conversion after an earlier scoring opportunity from one his side forwards hit the right Gaels hand upright and was cleared.

Melvin Gaels went back in front when a seventh minute Daithi McGloin shot from twenty metres out took a wicked dip at the last second and entered the top right hand corner of the St. Manahan’s net, as goalkeeper Dylan Gaffey looked on from the centre of his goal line and unable to do anything to prevent it.

St. Manachan’s upped their game after this and closed the gap to the minimum over the next two minutes with Jordan Reynolds adding a point from play and then tapping a free after he had been fouled by Melvin Gaels Conall McGowan.

St. Manachan’s took the lead for the first time in the game when Jordan Reynolds beat his marker, Conall McGowan and fired an unstoppable 10th minute shot past Melvin Gaels goalkeeper, Cian McGloin.

With St. Manachan’s almost camped in the Melvin Gaels half of the field for most of this period they went further ahead when Fiachra McGuinness fired over at the end of the first quarter.

Melvin Gaels, who hadn’t scored in the previous thirteen minutes, reduced the deficit after Darragh Rooney tapped over a 20th minute free.

A St. Manachan’s scoring attempt went a begging two minutes later when Fiachra McGuinness dropped his shot short into the hands of Melvin Gael goalkeeper, Cian McGloin after McGuinness had been put through from a Jordan Reynolds hit free.

Darragh Rooney reduced the deficit with St. Manachan’s to the narrowest of margins when he put over a 23rd minute Melvin Gales free.

St. Manachan’s had a let off a minute later when Kyle O’Driscoll deflected a goal bound Killian McGloin shot off the goal line at the expense of a Melvin Gaels ’45.’

After the resultant ’45,’ which was hit by Darragh Rooney, the ball came off the St. Manachan’s upright and sub Declan Clancy won possession from it and fired over a Melvin Gaels point that levelled matters.

Then almost immediately, Daithi McGloin edged Melvin Gales back into the lead when he fired over from play.

Darragh Rooney received a yellow card shortly afterwards. Rooney tapped over a ‘45’ close to the break, which put Melvin Gaels ahead by 1-6 to 1-4 at halftime.

After the restart Rooney again stretched Melvin Gales lead to 0-4 in the opening three minutes of the second half when he hit the target in turn from a free and play.

In response Ethan Harkin kept St. Manachan’s in touch when he split the Melvin Gaels uprights with a 35th minute effort.

A 39th minute off the ball incident was dealt with by referee, Ray McBrien when he issued yellow cards to St. Manachan’s Eoghan Keegan and Melvin Gaels, Cathal McSharry. McBrien consulted with his linesman and two umpires prior to making this decision.

But Darragh Rooney put more daylight between the sides when he slotted over a 44th minute free. However St. Manachan’s went back in front almost immediately after they put a defence splitting move together that sub Johnny Boyle finished off when he toe poked to the Melvin Gaels net.

In the space of another minute Melvin Gaels produced a defence splitting move of their won that Declan Clancy added the finishing touched to when he flicked the ball over the head of St. Manachan’s goalkeeper, Dylan Gaffey into the net after Gaffey had left his goal line in attempt to get to the ball before Clancy did.

St. Manachan’s Tadgh Mulligan received a 53rd minute yellow card. Fiachra McGuinness cut Melvin Gaels led to the minimum four minutes later when he fired over for his side.

After that Melvin Gaels found an extra gear as the contest headed towards its climax with Jack Roynane firing over from play after receiving a pass from Darragh Rooney and then Rhys Brennan made victory more secure when registering the game’s last score, a point from play.

Game at a glance 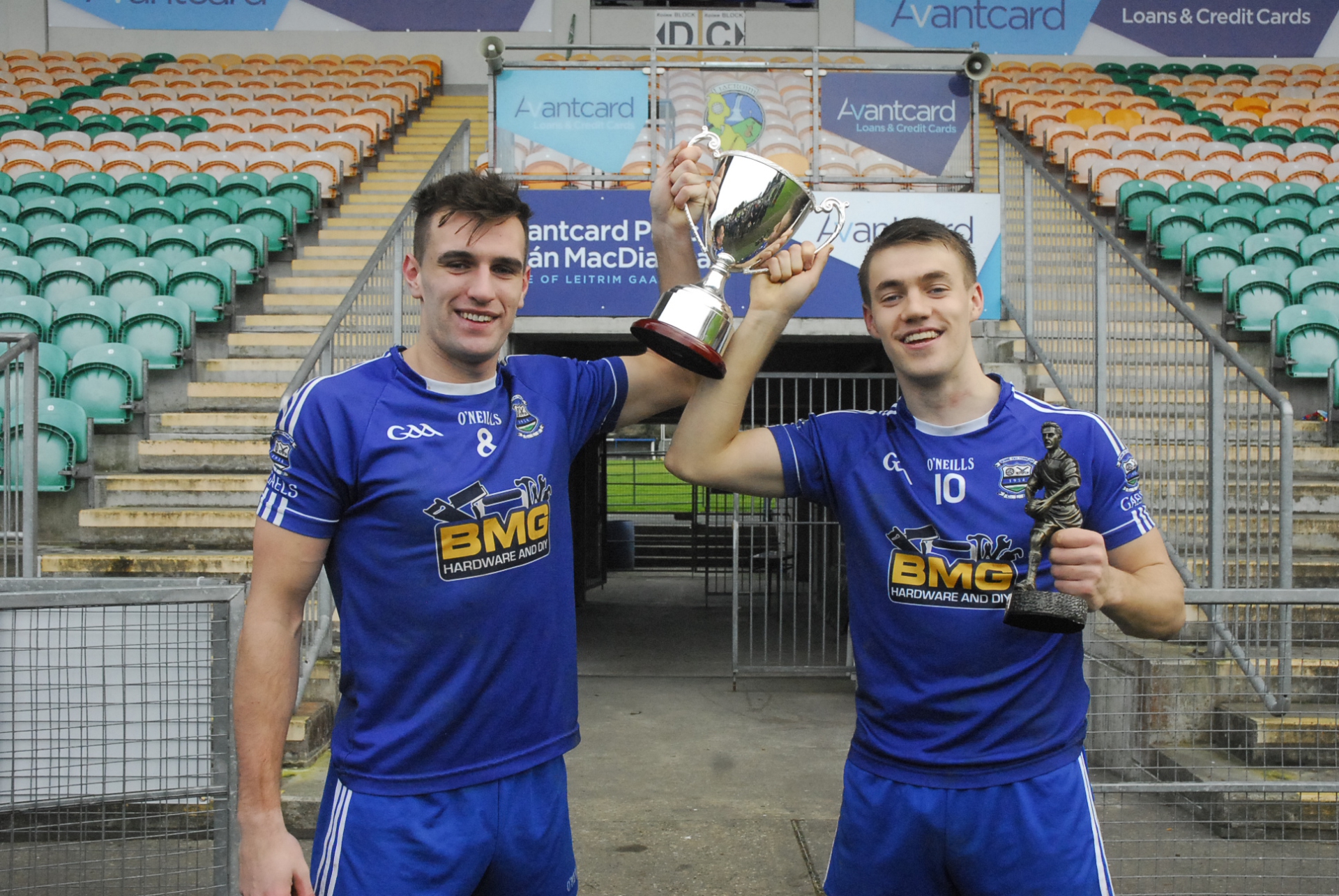 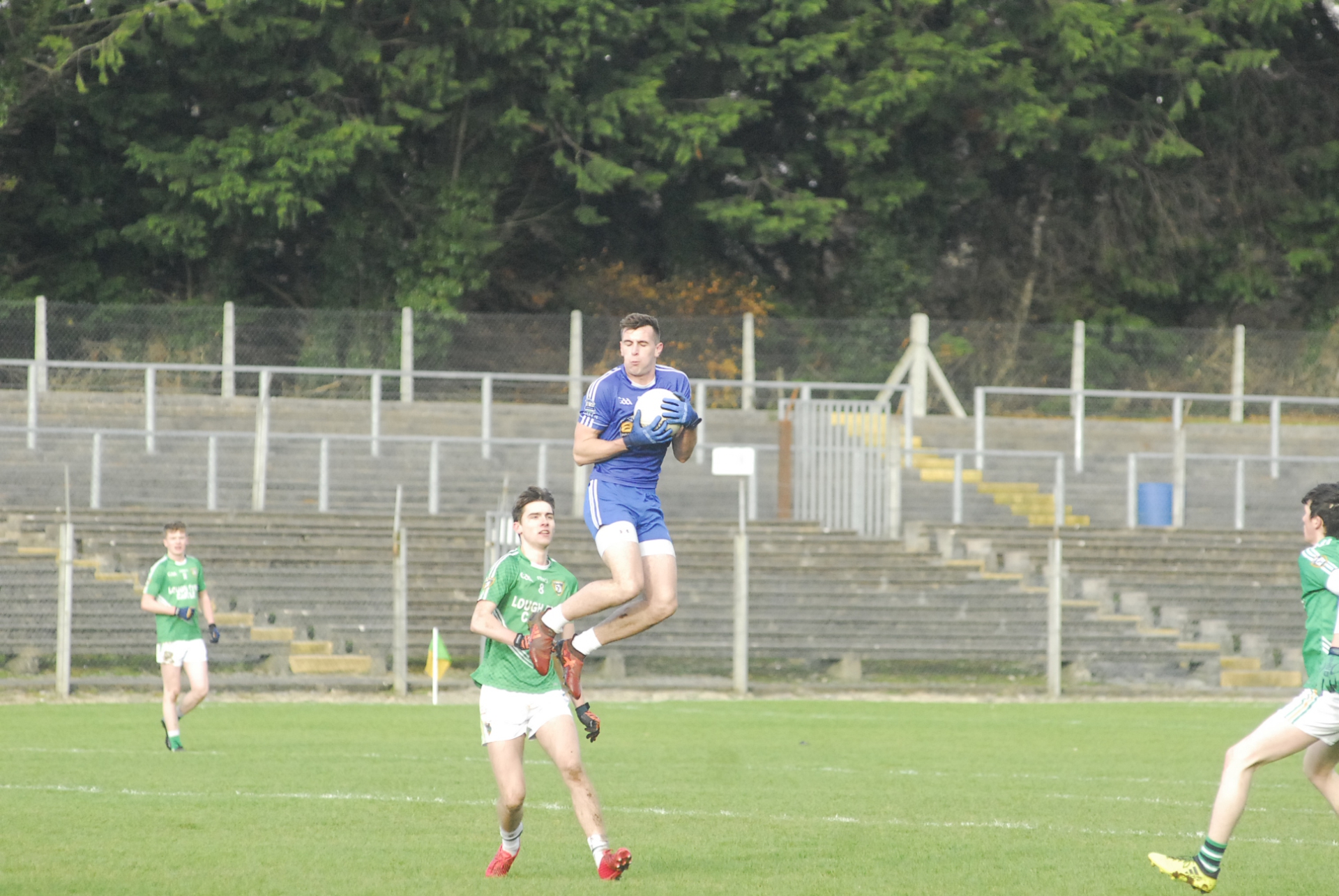 Sunday’s thirteen-a-side game produced lots of good football as the players involved were able to display their talents thanks probably to the extra on-field room they enjoyed to do so. 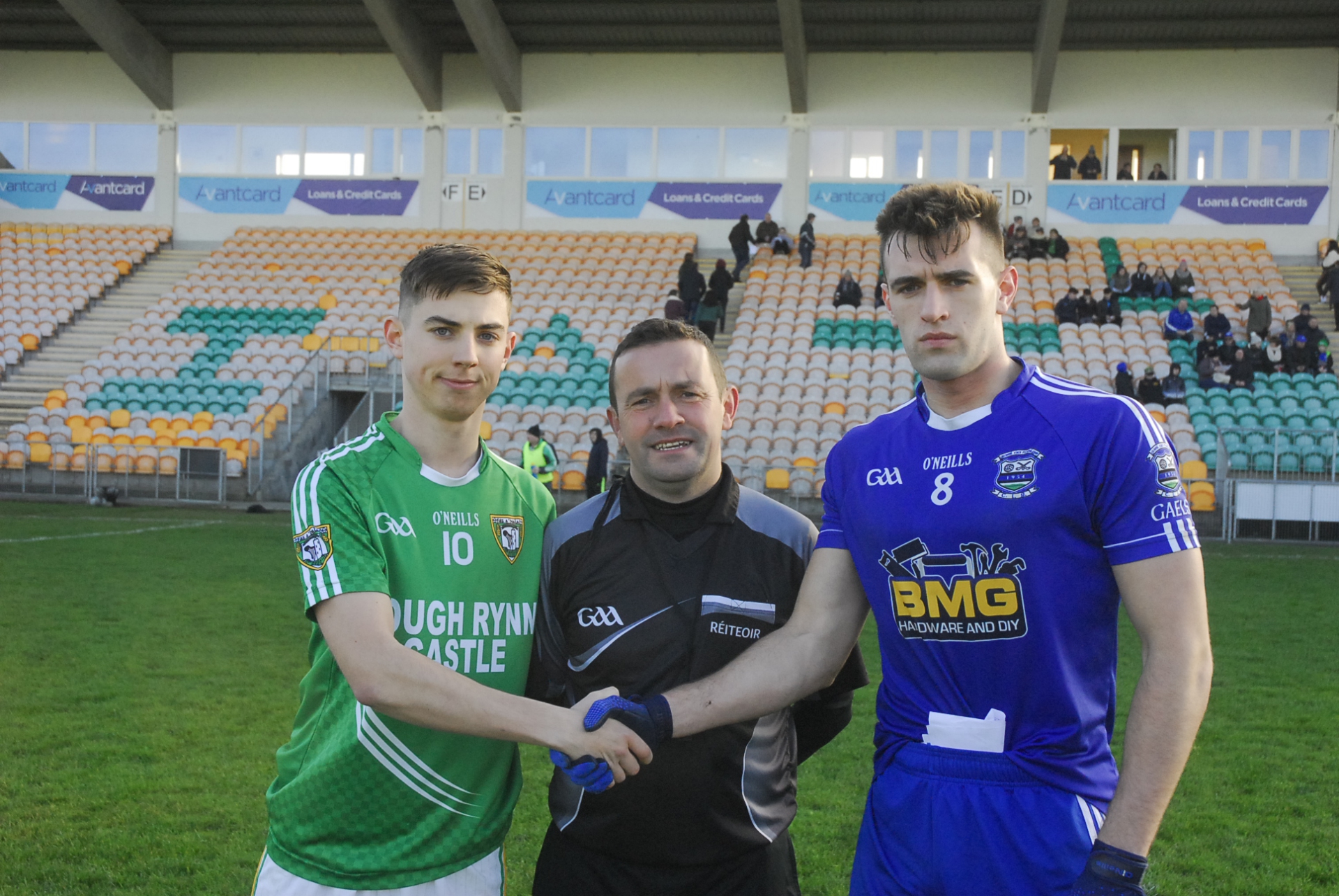 Ray McBrien did an effective and impartial job as the man-in-the-middle. He dealt appropriately with a few ‘handbag’ and ‘rush of blood to the head’ incidents on the part of a few players on each team.

Highlight
Daithi McGloin’s seventh minute goal, while somewhat fortuitous, was also spectacular. His speculative shot from 20 metres out ended in the top right hand corner of St. Manachan’s net, to get Melvin Gaels off to a good start.

Lowlight
Apart from the loyal supporters of each team the attendance for this last Leitrim championship final of the year was very small and disappointing for each side’s players, who served up an excellent hour’s football. 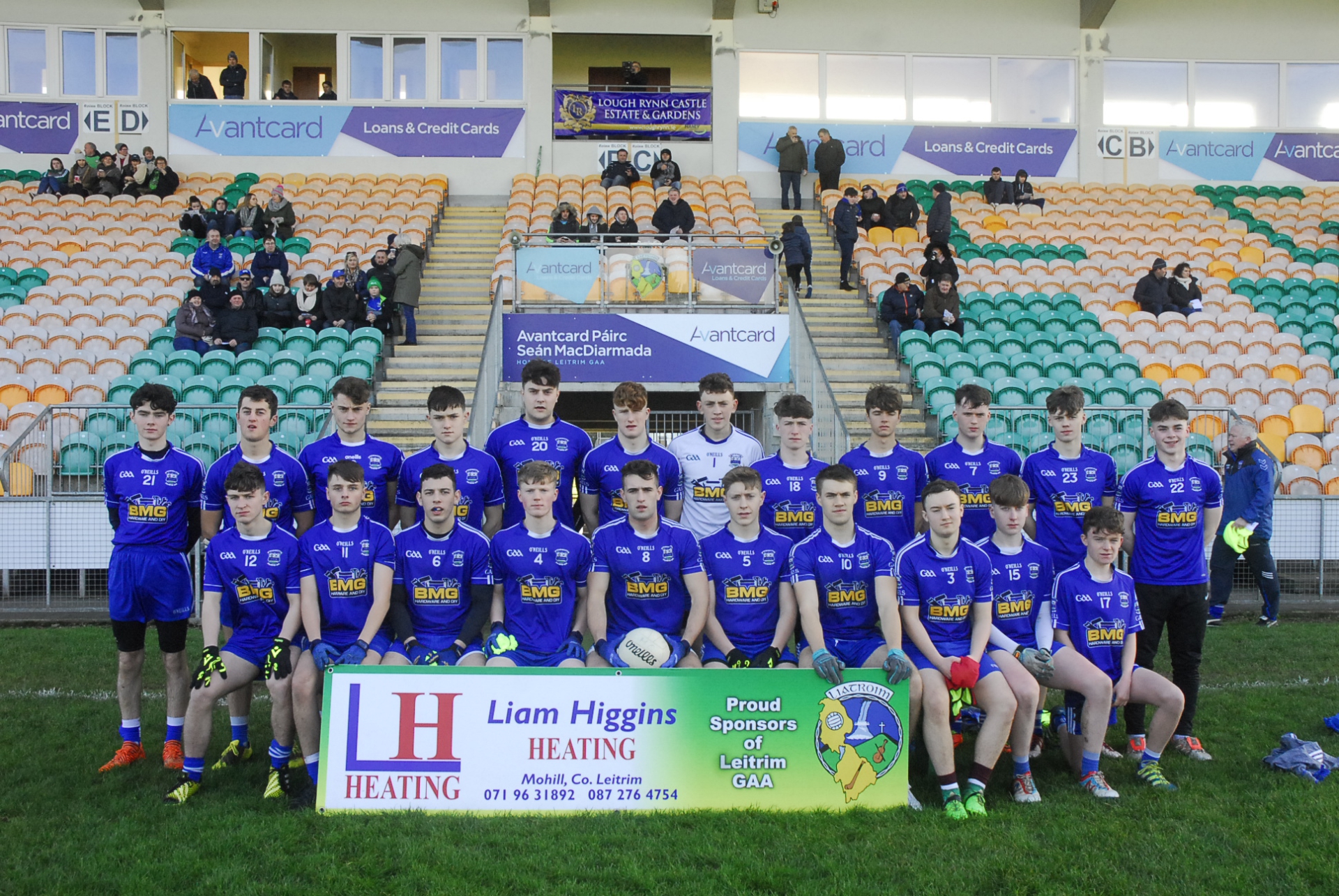 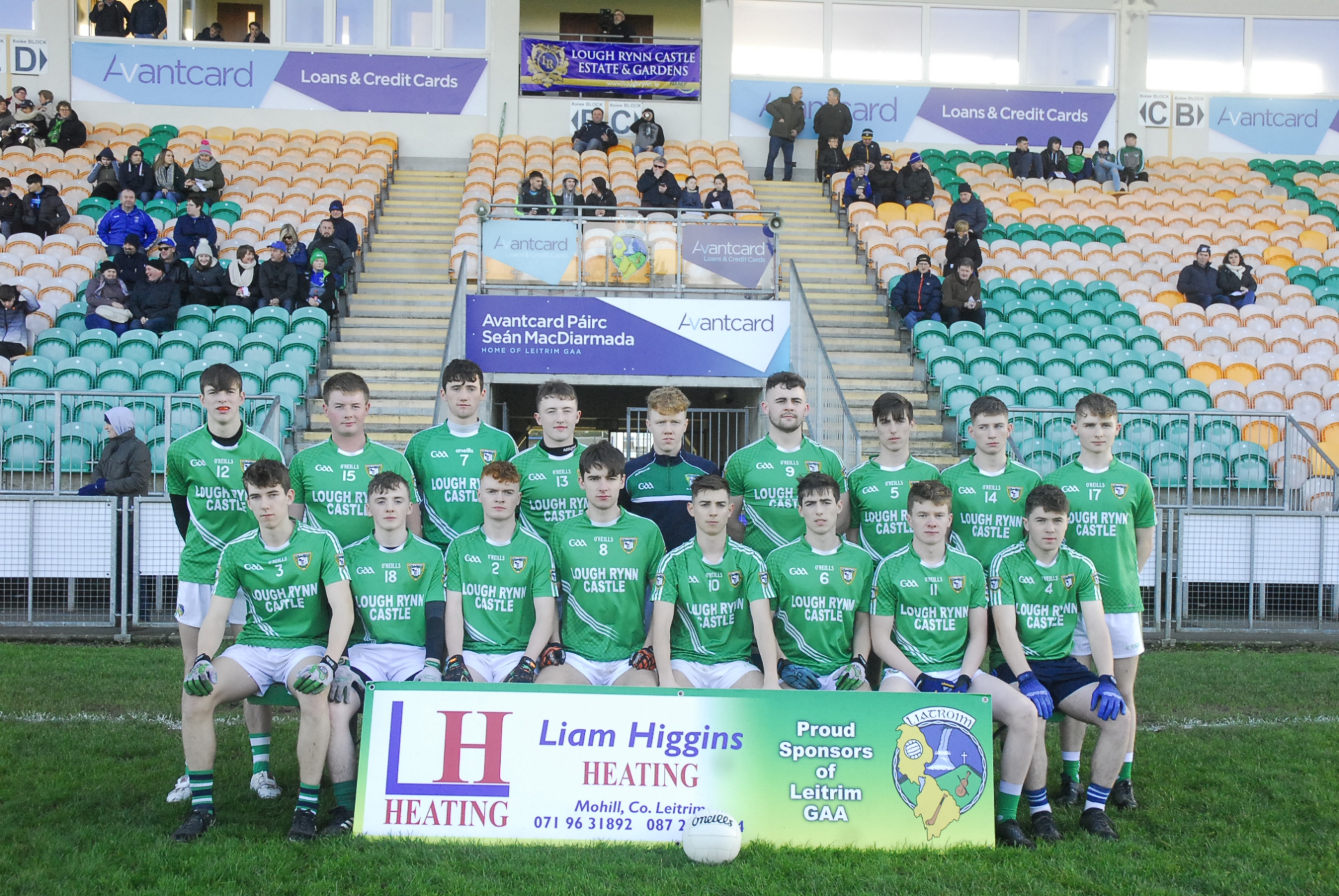