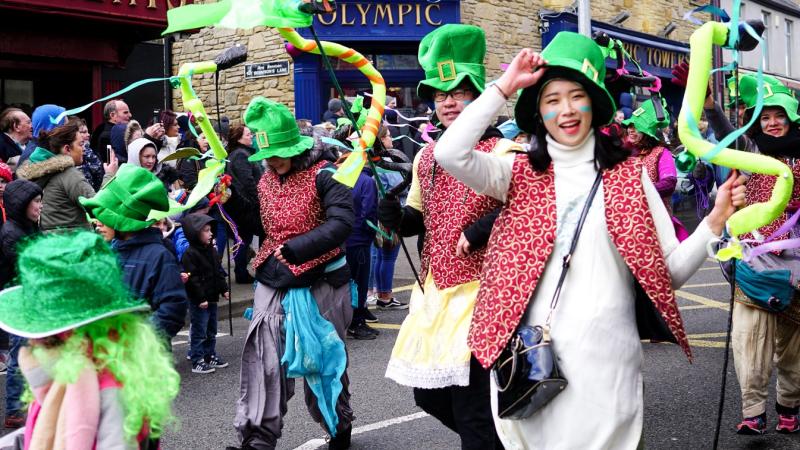 Taking part in the 2018 St Patrick's Day Parade in Bundoran.

Up to 10,000 spectators are expected to flock into Bundoran for the annual St Patrick's Day parade which will take place this Sunday, 17th March from 3.30pm.

The parade, with the theme "Welcome Home," will commence at East End and make its way up the Main Street and into the West End.

Parade director John O’Connell is delighted with the response for participants so far.

"We’ve had a number of community groups, local businesses and organisations registering to take part on the day. We also have a number of marching and pipe bands including the Kiladeas Pipe Band, Letterbreen Silver Band and the Moybrone Pipe Band. Local musicians will also take part in the parade which promises a spectacle of colour as it moves through the Main Street on the day. The parade will once again be led by a colour party from the Irish Defence Forces based at nearby Finner Camp.’

Tourism Officer Shane Smyth added: "While the parade is the anchor event, there’s plenty more happening across town right throughout the holiday weekend. All of the pubs will have live music during the day and into the evening. The Allingham will have a 3 day weekend festival, Bundoran Adventure Park will be open as well as the amusement centres, the cinema, bowling, equestrian centre, surf schools and of course bars and restaurants."

There’s still time to join in the fun. If you’re a local business, tourism attraction, community group or organisation and would like to take part in the parade, then register now at www.discoverbundoran.com/parade.

Cash prizes will be awarded for the best floats so make sure to put some thought into your entry!

For those unable to make it to Bundoran for the parade on the day, it can be viewed live on the Discover Bundoran Facebook page from 3.30pm.

For all the details on what’s happening in Bundoran for the holiday, log on to www.discoverbundoran.com/stpatricksday