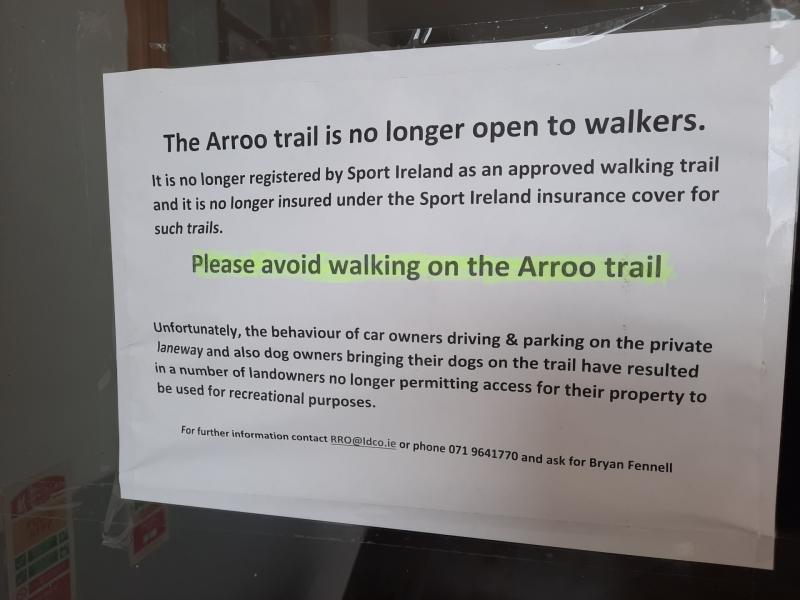 The loss of the popular Arroo Trail in North Leitrim has been described as a “serious blow” to tourism in the area.

Notices have been placed in Kinlough warning that the trail is “no longer open to walkers” after problems with the behaviour of people visiting the trail resulting in the withdrawal of permission to access this route. This means that there is no longer insurance cover for those who enter the trail.
At Monday's meeting of Manorhamilton MD, the six members submitted a joint motion calling on the Council to “take in charge the section of road on the Arroo Trail which they strengthened and resurfaced in 2016”.
Cathaoirleach Cllr Justin Warnock, said the situation is frustrating for land owners and those who wish to use the trail.
He said this is having a knock-on negative impact on landowners who have signed up for walks scheme funding.
Under this scheme participating landholders receive a payment for the development, maintenance and enhancement of National Waymarked Ways and Looped Walking Routes that pass through their land. The payment is based on a detailed work plan and a five-year contract.
“It is only a relatively small amount of money but these landowners have signed up for this, now what is going to happen?” he asked.
He said that the majority of landowners along the walk were happy for the trail to remain open and said that “all avenues have been exhausted” in trying to find a solution.
“We would never have asked the Council to take this step otherwise,” he said.
However in a written response the Council noted that they understood that the landowners involved in the trail committed to it crossing their properties via permissive access agreements with the local trail group.
“The Council assisted by carrying out works funded through appropriate funding streams, which it is assumed is the referenced strengthened and resurfaced works. However, this trail is now closed because a small number of the residents/landowners were not prepared to grant permissive access to their property on this trail due to the poor behaviour of a minority of trail users and lack of adherence to signage,” noted the Council.
The Council Executive has expressed reservations about “initiating the procedure” for the declaration of a public road in relation to parts of this trail and said that the legal position in terms of the existence of public rights of way and general public utility prior to the creation of the Arroo Trail, would have to be established.
“In addition legal advice may be required given the subsequent establishment of recreational trail use by means of permissive access agreements,” noted the Council.
“It is considered that the most appropriate mechanism to resolve the matter in a timely manner is for the Trail Management Committee to continue negotiation of reinstatement of the permissive access agreements with all landowners.”
Cllr Warnock however said there are “around 20 landowners” involved and “all of these bar one, and that is someone who owns a house, not land, have given their permission for access”.
Cllr Mary Bohan pointed out that this was an important tourism facility adding it is “very unfortunate that local negotiations have proven unsuccessful”.
Cllr Sean McDermott and Cllr Padraig Fallon agreed the current situation is “very disappointing” but both said that a solution needs to be found.
Cllr Felim Gurn said it is frustrating especially as public funding had been spent on a trail which has now been closed.
“We need to get legal advice, for our own sake and see what the position is,” added Cllr Bohan.