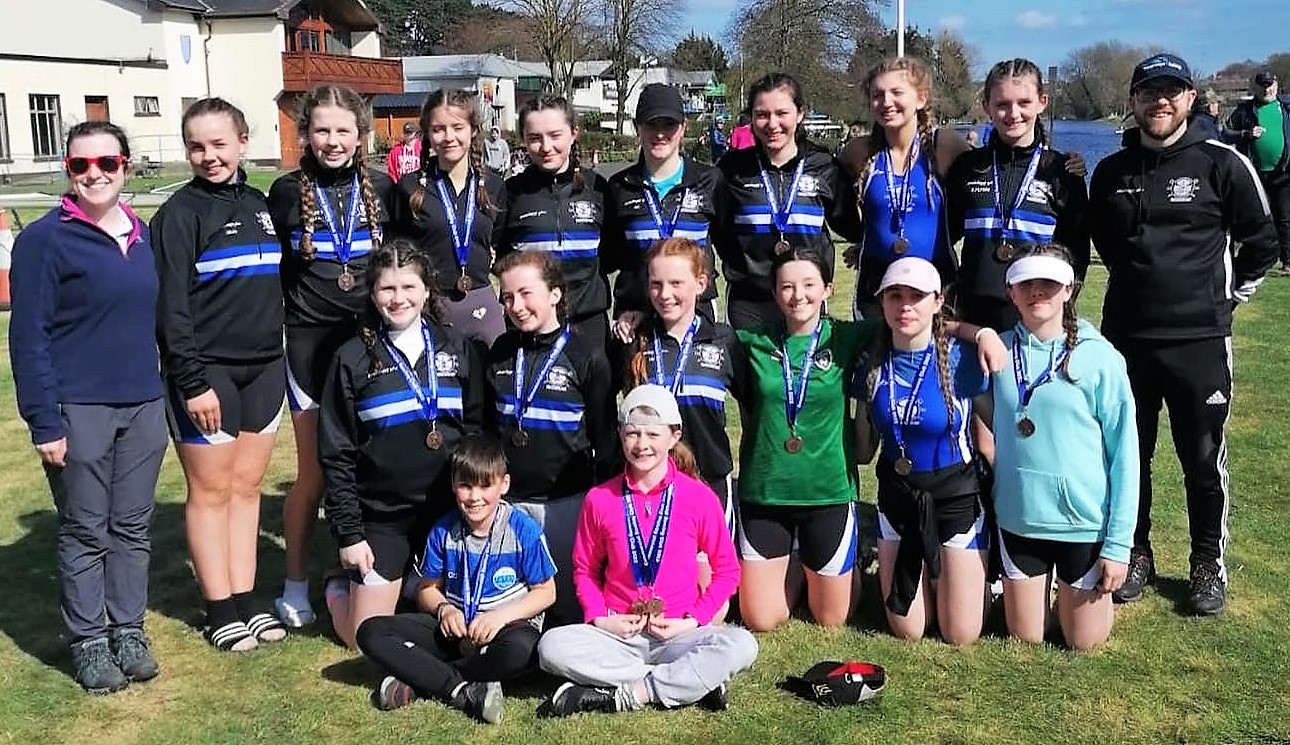 Carrick RC's J14/15 group all delighted after winning their races

Carrick RC attended two regattas up in Islandbridge in Dublin on the weekend of April 2-3. These were the first regattas of the rowing season, and the rowing club had over 50 rowers participating throughout the weekend.

On April 2, Neptune RC started off the regatta season with their annual regatta. We had J16 boys & girls, as well as j18 boys & girls racing throughout the day. The club quad was first to take to the water, which consisted of Patrycja Kaminska, Grace Earley, Mae Harman and Lisa McGovern.

With a bit of luck, the girls rowed straight through to the semi finals.  Despite rowing very well, they faced a crew that later went on to win the categoryl.

The J18 girls quad with Molly McGreevy, Leah McLoughlin, Lisa McGovern and Grace Earley also had a great day of racing, making it as far as the semi-final. As for the boys in the J18 category, the quad with Darragh Callaghan, Eolann Nugent, Colin McGrath and Marius Coppieters put in a great effort which left them just short of qualifying to the next round.

Same goes with single scullers Joe Chilton and Leah McLoughlin, who had tough competition. This loss has now left the rowers motivated to train and have themselves prepped and ready for their next day of racing.

There were J16 boys who also raced down the course, such as sculler Brierton Murphy and crew boats who were up against fierce competition.

With it being the first regatta of the season, the club took it as a learning experience and a pinpoint of where they are at.

Sunday's racing took place on the same stretch of river, hosted by neighbouring Commercial Rowing Club. At this event, the J14 and J15 girls took to the stage and performed immensely. These age categories can be very competitive as they are straight finals, nonetheless, the girls took the racing in their stride.

The first race of the day for the club was won by rowers Deryn O’Rourke, Grace McCauley, Aifric Gibney and Roisin McCauley with cox Hannah Flynn. There were more wins in the afternoon with rowers Isobelle Murphy, Katie McDermott, Hannah Butler and Rylee Carney (cox Hannah Flynn) crossing the line ahead of an Enniskillen crew.

The third quad consisting of Ruth Beirne, Sarah O’Leary, Caoimhe McGovern and Elizabeth Flynn with cox Cillian Carney also crossed the line ahead of their opposition.

The last win of the day came from our youngest crew competing at the regatta. Megan, Clara, Cara and Hannah with cox Natalie were our newest rowers to the racing scene, but that didn’t phase them in the least as they rowed to victory, earning themselves a medal.

The club left with four wins from the day, which is undoubtedly a successful day of racing. All athletes, mentioned or not, put in a great effort throughout the weekend and are constantly going from strength to strength.

The club's next outing is April 30, in Portadown where we hope to only build on this success.

In other news, the club was delighted to win the award for best club/organisation in the 2022 St Patrick’s day Parade in Carrick. It was a great day out for the club to promote the sport within the town and we were only honoured to receive recognition for this. A big thanks to the Carrick Chamber Office for this prize.

The club was also grateful to receive €5,000 from Texaco under the support for sport scheme. This money will massively help the club with buying equipment which is always needed within the world of rowing. A big thanks to Texaco for this boost as it will definitely be put to good use.