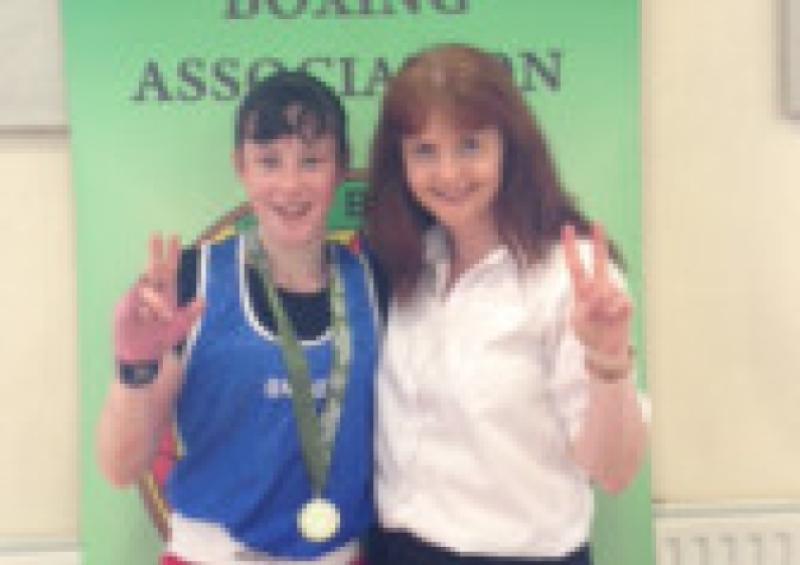 Dearbhla Rooney had a very successful and eventful week as, just a week after claiming the Player of the Match in a Connacht Ladies Final, the Sean McDermott BC fighter claimed an All-Ireland title.

Dearbhla Rooney had a very successful and eventful week as, just a week after claiming the Player of the Match in a Connacht Ladies Final, the Sean McDermott BC fighter claimed an All-Ireland title.

The young Manorhamilton fighter claimed victory in the Irish Girl 3 52kg final at the Dublin’s National Stadium when overcoming the challenge of Natalie Russell Riverside BC, Cork.

Déarbhla got off to a flying start and put her opponent under pressure from the first bell. A standing count was given to Russell at the end of the first round.

A dominant second round was followed by another standing count for the Cork fighter in the third as Rooney claimed a clear cut victory and her second National title in three years, sparking great celebrations involving all her Connacht supporters when Rooney’s hand was raised by the referee.

Déarbhla, who scored three goals in Leitrim’s loss in the Connacht B Final to Galway the previous Sunday, decisively defeated Strabane’s Tamika Lyndsey by a 3-0 margin in the semi-final bout on Friday.

Seán McDermott Boxing Club also had Alannah Ward in action at the Irish Amateur Boxing Association girl’s championships in the National Stadium at the weekend.

Despite boxing very well in her semi-final bout, Alanna unfortunately lost out at the semi-final stage against a tough opponent, Shannon Flynn from Crumlin BC with the Dublin fighter going on to claim the national title at that weight division.