Taking on the steepest street in the world in New Zealand 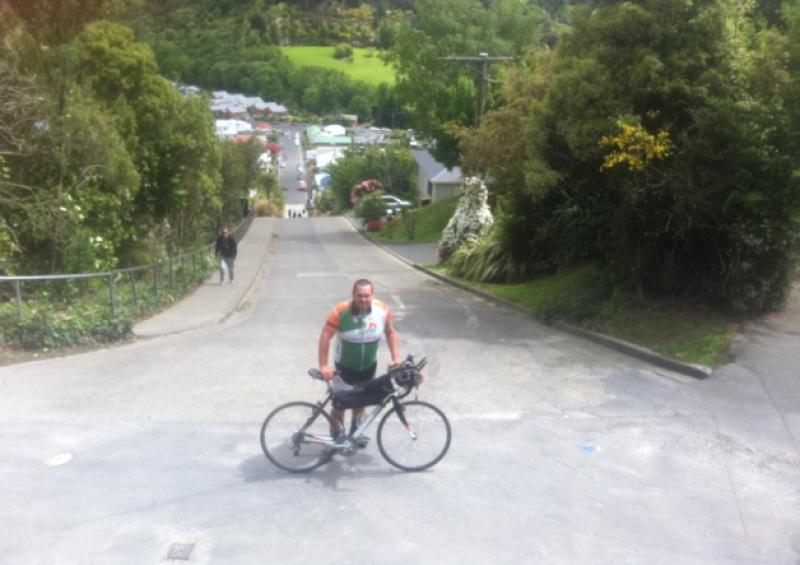 The fifth leg of my Pedal The Planet adventure saw me take on the mountains of New Zealand and since landing in Queenstown near the bottom of the South Island it’s been an unending battle with the terrain and the northwesterly headwinds.

The fifth leg of my Pedal The Planet adventure saw me take on the mountains of New Zealand and since landing in Queenstown near the bottom of the South Island it’s been an unending battle with the terrain and the northwesterly headwinds.

I received fantastic support from the ex-pat Irish community with a call out on social media to Irish people living in New Zealand resulting in more offers for accommodation than I had nights in the country. It’s meant that I’ve managed to cover the entire south Island in three weeks with only four nights in hostel accommodation, the total cost of which was less expensive than a single night in the Nullarbor desert in Australia.

It’s been a wild ride since leaving Queenstown along the Devils staircase to the east of the lake and covering the distance to Invercargill at the southern tip of the Island. turning my attention towards the west coast, I availed of couch surfing to find places to stay in Gore, Palmerston and Dunedin, coupled with offers from friends and through social media it meant I had company for most of the first three weeks, off the bike at least.

My first major test on the bike was about 500km into my spin around the island at the foot of Baldwin Street in Dunedin. Although it’s relatively short it is acknowledged as the steepest street in the world at an gradient of 36% in places. I had only planned on having a look up the street but offers of support from other tourists didn’t leave me with much of a choice in the matter. I think part of me actually wanted to give it a lash anyway. I set off up the hill and after about 30% of the climb I ran out of steam, my bags and equipment were just too heavy.

I discarded the bags at the side of the road and set off again. I reached just over the half way mark this time before it got ridiculously steep. It wasn’t the prettiest of ascents, but by zigzagging my way over and back across the road I managed to slowly carve the remainder of the street up into manageable chunks. It took over ten minutes to complete the full ascent boasting an average speed of just over one kilometre per hour.

A week later I arrived in Christchurch where I was offered the run of his house by Darren, an old school friend from Carrick, who is now married and working in the earthquake devastated city. I had a few days with Darren, his wife Eri and other old friends getting familiar with the city which with the rebuild underway is a fantastic location for anyone thinking about trying greener pastures.

With plenty of construction work available it’s a world away from what I left at home. Fantastic weather, active lifestyle and amazing developments across the entire city promise a fantastic future for someone who might be unemployed and seeking work.

Since leaving Christchurch on Saturday morning I’ve stayed in some interesting places including a converted railway carriage and a hobbit styled dorm in Waipara and Kaikoura respectively. Kaikoura especially was a eye opener, the snow capped mountains running down to the ocean with local beaches populated by dolphins, whales and seals in huge numbers.

I’m looking forward to crossing the strait and reaching Wellington before turning my attention to the North Island from tomorrow morning.