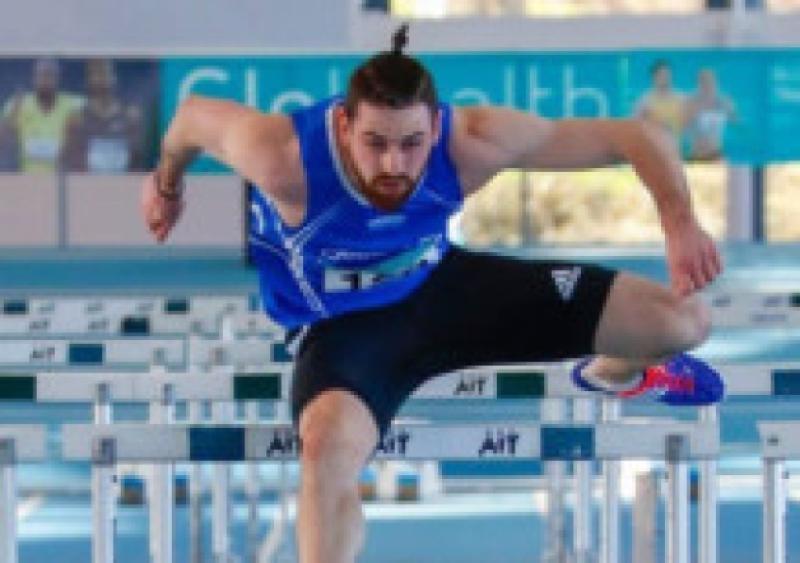 Just a matter of days after registering a new personal best, Carrick-on-Shannon’s Gerard O’Donnell secured his place on the starting line for the European Indoor Championships next month in Prague.

Just a matter of days after registering a new personal best, Carrick-on-Shannon’s Gerard O’Donnell secured his place on the starting line for the European Indoor Championships next month in Prague.

After he claimed victory in the 60m hurdles final at the IFAM indoor meet in Ghent, Belgium, on Saturday, Gerard reflected on his stunning achievement.

After a long day travelling home on Sunday and with his achievement still sinking in, Gerard took a moment on Monday to look back on a week to remember which began with him recording a personal best time of 7.99 in Athlone, the first time he beat the eight second barrier as he moved to sixth on the Irish all-time fastest list.

Looking back on that race in the Glo Health AAI Games in Athlone Gerard recalled, “I ran a nice pb on the Sunday (in Athlone) but I knew my start wasn’t great and there was room for improvement. I had a really good session on Wednesday with my coach,” he added.

Next for Gerard was the event in Ghent and he acknowledged, “Before the heat I was just thinking of qualifying for the final.”

Gerard took his recent good form into his heat as he set yet another personal best - “I knew I could always improve on the first hurdle. It was a case of trying to get out of the blocks well and trying to get into the final.”

A time of 7.87 saw Gerard book his place in the final and as he talked through the race he revealed from an early stage he felt he was in contention to claim victory.

“I got out well of the blocks and after the third hurdle I took the lead and from there I was thinking I could get the win.”

A time of 7.73 saw Gerard claim his third pb of the week and victory and with his time inside the qualifying standard (7.78), he will also be packing his bags for the European Athletics Indoor Championships, which will take place from March 6-8.

Looking ahead to the Indoor Championships in Prague, Gerard was frank in his assessment when he stated, “It will be tough.”

He pointed to the fact his current ranking is 14th or 15th which would indicate he is on course for a semi-final berth but he is well aware that in athletics and especially hurdles, anything can happen.

“Anyone can clip a hurdle or have a false start. It’s all about getting yourself on the starting line.”