Special presentations as plans get underway for South Leitrim Cycle 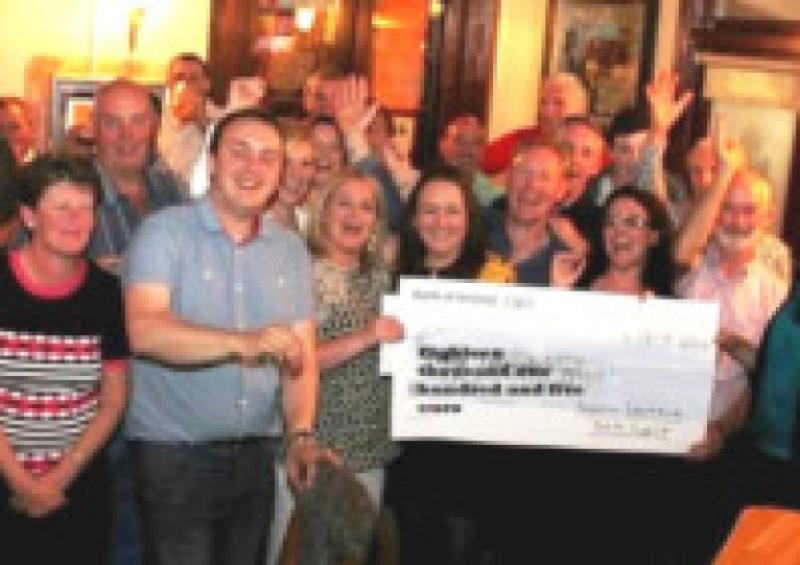 A massive congratulations and well done to all the dedicated cyclists who managed to raise an amazing €18,105.44 as part of the 2014 South Leitrim Charity Cycle.

A massive congratulations and well done to all the dedicated cyclists who managed to raise an amazing €18,105.44 as part of the 2014 South Leitrim Charity Cycle.

The event has gone from strength to strength and last year €500 of the funds raised was donated to the Order of Malta as a token of appreciation for their on-going help and support.

The €3,000 draw was won by Catherine O’Dowd who presented a cheque for the amount to the Leitrim branch of the STOP charity for suicide prevention. The remaining €14,605.44 was presented to Aisling Barry from the Northwest Hospice to allow this very important service to continue to provide essential palliative care and support for patients with terminal illnesses and their families.

A special presentation was also made to JP O’Dowd who was gifted with a beautiful sponsored Leitrim Crystal decanter and glass to acknowledge all of the effort he has put in down through the years. Since JP joined the Charity Cycle back in 2008 he has raised €16,000 for the hospice.

Paddy Gaffney was presented with a bicycle clock as a token of thanks for raising €5,000 over the past five years.

Speaking to the Leitrim Observer this week, South Leitrim Charity Cycle founder and organiser, Tracy Kivlehan, “I think for many the highlight of the 2014 Charity Cycle day was when we arrived to such a feast in Leitrim Village. Never before have tea/sandwiches/cakes/snacks tasted so good! So thank you to Mary McDermott, Helen McDermott, Ann Earley, Jacinta Rowley, Fionnuala Reilly, Katie Mulligan

“Thank you also to Jack and his dad who provided the music with the Looney Hoppers and to Joe McGovern, Dublin who has set up the Cycle’s website, online registrations and carried out a lot of our PR - he is a massive asset to our little group working tirelessly in the background and we really appreciate all his help.”

Tracy also thanked Darren Conboy (repair man), Colin Conboy (steward) and Ann Marie Conboy (multitasker) who had less than a weeks notice that their services were required and ran to the rescue. Thank you’s were also extended to Annella McGuinness, Sarah Louise Gaffney and Celine Kinealy for the bucket collections and to Gerry Costello and Niall Faughnan who manned the BBQ following the event.

Tribute was paid to the Order of Malta crew, Gda Seamus Mimnagh and Annette and Sylvester Kivlehan who do so many jobs behind the scenes.

Tracy also extended thanks to Niall & Jonathon in Planxty’s Mohill for their support and sponsorship; Maura and Gene Baxter, Baxter’s Centra for sponsoring all the water for the cyclists; Gallaghers Bakery who provided all the bread products; Gavin Mitchell who kindly sponsored the burgers; Fintan Greenan for the snacks and Loughlin for all the chocolate.

“On behalf of the hospice and myself thank you so much to everyone who sponsored us in 2014 helping us to raise another massive sum of money in such difficult times. The last and biggest thank you has to go to each of our cyclists for all of the effort you put in not just on the day but for all of your fundraising efforts. Well done again everyone and I hope to see you all in August,” added Tracy.