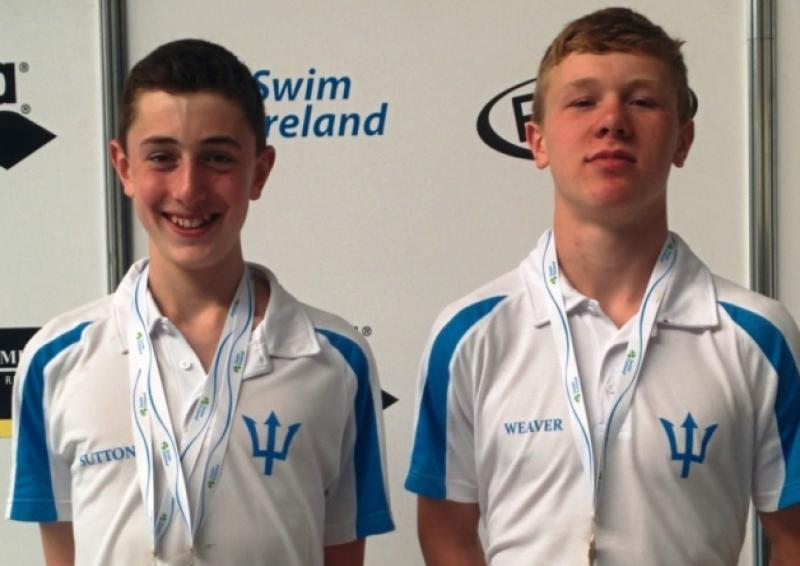 It was a clean sweep for Trident Swim Club last weekend with members from the club competing at both the Scottish National Championships in Glasgow and the Irish Age Group Division 2 Championships in Limerick.

It was a clean sweep for Trident Swim Club last weekend with members from the club competing at both the Scottish National Championships in Glasgow and the Irish Age Group Division 2 Championships in Limerick.

Gabriella Weaver planted her feet firmly on the international swimming scene when she secured a World Junior Swimming Championship qualification time last Friday, putting in a world class performance to take the silver medal in the 50m freestyle in a time of 26.35 seconds at Tollcross International Leisure Centre.

With the determination that has seen her smash numerous Connacht records in this event, there was no stopping Weaver in the final as she scorched a trail down the pool, touching home in 26.35 seconds, which puts her well inside the qualification zone for Singapore where the World Juniors will take place in August.

Weaver already held the both the Junior and Senior Connacht Records for this event, but has now set new ones with her performance in Glasgow at the weekend. The youngster, who is coached by her mother, Trident Head Coach Samantha Weaver, has a summer of intensive training ahead of her before she jets off to Singapore in August.

The pair were unstoppable over the three days of the competition, setting personal bests in every single one of their events to rack up a total of eight podium places for Trident.

Sutton set the ball rolling last Friday when he picked up the silver medal in the 200m freestyle. After smashing his entry time of 2:34.38 in the heats, he headed into the final with a time of 2:26.21 and then knocked off another five seconds to take second place in a time of 2:20.84.

This was followed by the 100m breaststroke, which saw both club members up against each other. During the heats Robin Weaver dropped six seconds from his entry time, to head into the final on a time of 1:25.95 with Diarmuid also dropping six seconds, going into the final on 1:26.72. This time it was Robin who touched home first, taking gold in the final with a time of 1:23.30, with Diarmuid taking the bronze in 1:26.76.

Saturday’s action in Limerick included a second silver for Sutton in the 100m butterfly, with a final time of 1:16.33, dropping three seconds from his entry time of 1:22.65 in the heats, and another three seconds in the final.

Both boys made the final in the 200m Individual Medley, but it was Sutton who took first place in this event, knocking a massive 14 seconds off his entry time to take gold in 2:40.80, while Weaver’s time improvement of 12.76 seconds gave him fifth place with a finish time of 2:46.74.

The final day of the competition and both boys were competing in the 200m breaststroke and the 100m freestyle. This race was Diarmuid’s, and after knocking 16 seconds off his entry time, he headed into the final seeded second on a time of 3:06.89. Another push from Sutton saw him knock off over 5 seconds in the final, to take gold in a time of 3:01.21.

The 100m freestyle, the last event of the competition, saw both boys go head to head: Weaver going into the final on 1:05.31 after improving on his entry time by 3.41 seconds, and Sutton going in on 1:05.53 after taking 6.48 seconds off his seed time. However, it was Weaver who took gold in the final event of the championships in a time of 1:03.05, with Sutton close on his heels to take silver in 1:05.92.

It was an extremely successful few days on all fronts for the club and the results achieved by the members are a testament to all their hard work and commitment throughout the season.