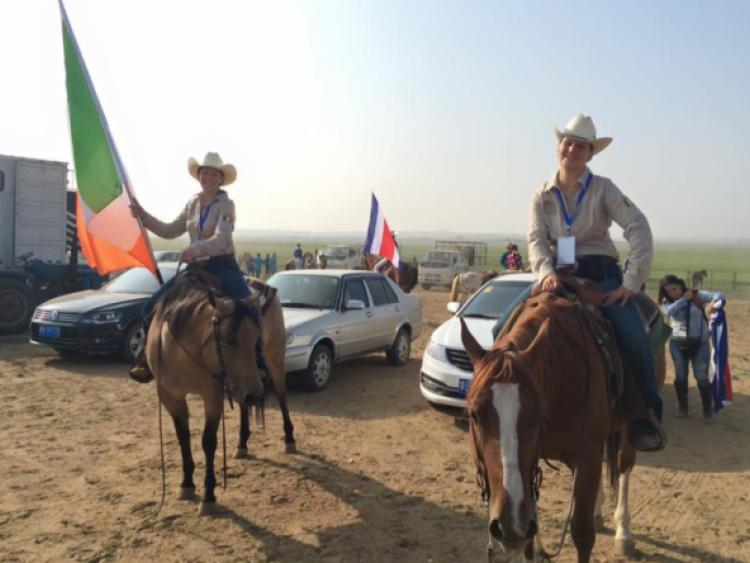 Ballinamore’s Susanne Hehle made history recently when she competed in China as part of an international quarter-horse team at a prestigious show in Inner Mongolia.

Ballinamore’s Susanne Hehle made history recently when she competed in China as part of an international quarter-horse team at a prestigious show in Inner Mongolia.

Susanne Hehle of Co Leitrim and Anna Lehane-Davny of Waterford made IQHA history on July 10, by being the first to represent their country in Barrel Racing at the 2015 Damao International Horse Fair and AQHA China International Western Show.

Susanne and Anna were part of a group of international riders, representing Australia, America, Costa Rica, Ireland and Germany, who were billed to compete against the top 10 timed Chinese Barrel Racers, riding on behalf of ranches and riding clubs from across China.

The two day Barrel Racing event was part of the People’s Republic of China’s largest local festival that featured many cultural aspects and traditions of nomadic Chinese indigenous to this area. In all, over 60 riders from China competed in initial time trials, with only the best 10 times moving forward to race against the international competitors.

A blind draw for horses was made, and the top 10 Chinese and the 10 international riders then raced for the best combined time of two runs.

The two Irish riders took to the saddle and participated in the opening ceremony, riding two American Quarter Horses donated to them by the Unbridled China Ranch – the official home of AQHA China.

The opening ceremony was also attended by approximately 70 other Quarter Horses and their riders, hundreds of nomadic riders and their local traditional horses, dozens of camels, dancers and traditionally dressed representatives of tribes from across Inner Mongolia.

The parade processed through a hail of flags, kites, music, colour, fireworks and the cheers and applause of over 30,000 spectators.

Susanne narrowly missed a spot in the top 9 when her horse knocked the second barrel during her first run, adding a penalty of five seconds to her time and placing her 16th.