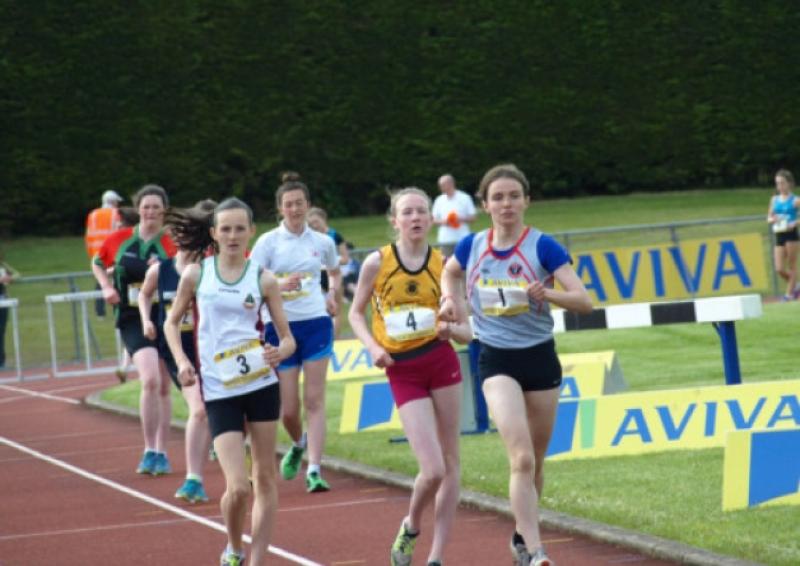 Dearbhaile Beirne of Mohill Community College kept up the strong tradition of Leitrim Schools athletes in the Walking events at the AVIVA All Ireland Schools Track and Field Athletics Championships by winning the Junior title at Tullamore on Saturday.

Dearbhaile Beirne of Mohill Community College kept up the strong tradition of Leitrim Schools athletes in the Walking events at the AVIVA All Ireland Schools Track and Field Athletics Championships by winning the Junior title at Tullamore on Saturday.

Since Ballinamore’s Fiona Lee won the first All Ireland Schools Junior title at Belfield in 1981 Leitrim walkers Gary Burke, Colin Griffin, Ronan Griffin and Laura Reynolds have brought home a number of titles with other Leitrim walkers acquiring medals from the minor placings.

Twelve athletes faced the starter in pleasant conditions for the three lap race. The Mohill walker took the front from the gun and was closely followed by the Leinster pair Niamh O’Connor of St Wolston’s and Rachel Glennon of St Finian’s Mullingar.

Connacht runner up Orlaith Delahunt of Ursuline Sligo who has had many battles with Dearbhaile over the past two years led the pursuing group as the top three broke away in the second lap.

Dearbhaile was able to keep a few metres distance ahead of the St Wolston’s walker as the lap progressed and this began to increase after the bell.

With 200 metres to go the Leitrim walker has increased the distance to a decisive lead and came home in a very impressive time of 5.38.0 with On Connor second in 5.43.2 and Glennon third in 5.48.7. The Sligo walker finished fourth in 6.06.2.

Dearbhaile’s time compared very favourably with that of the winning boy in the following race who took the title in a close finish in 6.04.64.

There were only a few other athletes in action. Tom McCabe of Carrick on Shannon Community School took sixth in the Junior Long Jump with a leap of 5.07m while team mate Stephen McDermott was eighth in the Junior High Jump at 1.60, the same height cleared by competitors placed fourth,fifth,sixth and seventh.

Joanna Duignan finished 5th in the Inter Girls 300m Final, running 41.50 seconds in a competitive race while Cathal McElgunn was fifth in the Senior 200m, running 23.58.

Elise Bruen in the Junior 800m and Cian Murray in the Senior 800m, both from Carrick-on-Shannon Community School, put up good performances in very fast races but finished down the field.

Colin back in action: Colin Griffin had his first race since the Olympic Games last August when he competed as a guest walker in the Leinster Championships at Tullamore on Sunday where he won the 5000m Walk in a very satisfactory 20.17. A few days earlier AAI announced that he was pre selected, subject to form, for the 50K Walk at the World Championships in Moscow in August along with Robbie Heffernan and Brendan Boyle and two marathon runners, Andrew Pollock from Belfast and Maria McCambridge from Donegal.