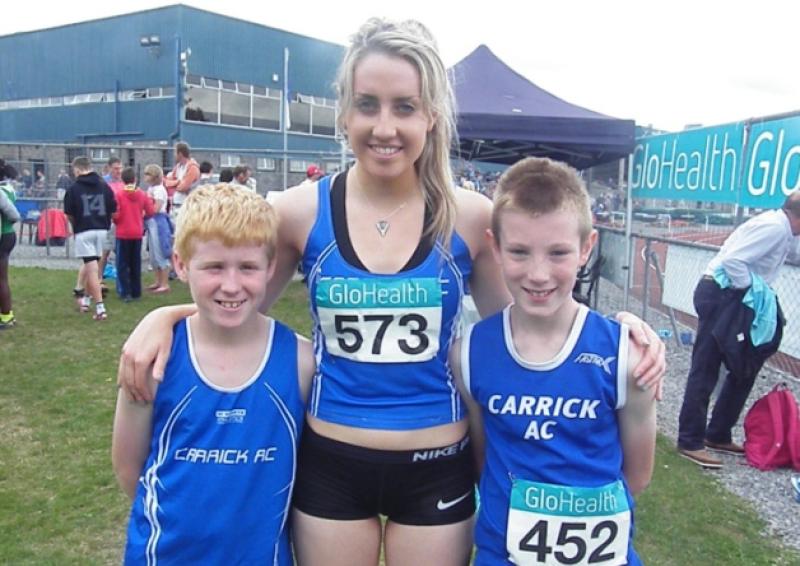 Mohill & District AC walkers Dearbhaile Beirne and Eoin Gaffey picked up a gold and a silver while Carrick AC’s Joanna Duignan brought home a silver medal from the U19 400m on Saturday.

Dearbhaile Beirne was Leitrim’s only gold medal winner as the Mohill walker fought out a tremendous battle with Sligo’s Orlaith Delahunt in the U17 Walk, winning in a time of 15.21.21 as the Mohill athlete only got away in the last lap.

Beirne led all the way but was tracked closely by the Sligo walker who twice closed down big gaps before the Mohill walker turned on the pace in the last lap. Beirne seemed on her way to a big win but Delahunt again fought back, closing the gap substantially over the last 100m.

However, Beirne had done more than enough beforehand and crossed the line in a time of 15.21.21 to Delahunt’s 15.22.54 before she left to take part in Leitrim Ladies U16 B Connacht Final in Charlestown later on Sunday.

Dearbhaile was joined on the podium by young clubmate Eoin Gaffey who fought out an even closer battle with Moycarkey Coolcroo’s Liam McDonagh, swapping the lead in an intense battle over the 2,000m.

Joanna Duignan ended an injury hit outdoor season with a silver medal in the U19 400m in a time of 60.03, well outside her best but a great achievement considering her injury problems. Joanna also finished sixth in the 200m on Sunday.

Ballinamore’s Sibeal Reynolds finished 9th in U16 Long Jump with 4.64m while the U12 Girls 600m saw two Leitrim athletes in action, Ellie O’Rourke of Ballinamore finished 10th in 1.57.28 with Ella McDaid 12th in 1.59.73 in an incredibly fast race.

In the throws, Ballinamore’s Ciara McGoldrick finished 10th in the U15 Shot with a throw of 7.86m while Callum Whelan finished 11th in the U17 Javelin.

Last Sunday’s event is the last Athletics Ireland Juvenile action of the track season with only the National Community Games Finals in Athlone in August left on the calendar. The emphasis will change to road and cross-country running in the coming weeks.