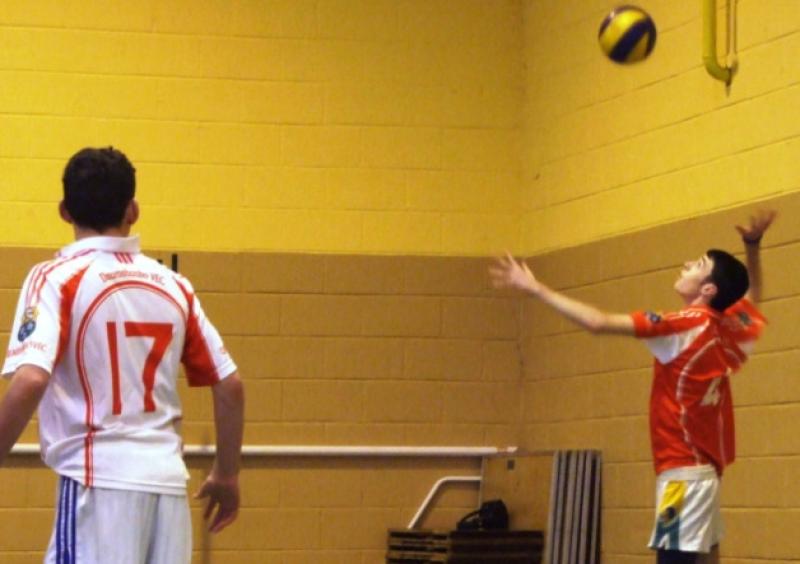 Drumshanbo and Elphin faced a baptism of fire in this year’s Cadette A national league when they faced the top two schools in recent cadette years in their opening matches.

Drumshanbo and Elphin faced a baptism of fire in this year’s Cadette A national league when they faced the top two schools in recent cadette years in their opening matches.

Not only that, but their opponents St. Raphaels and Brigids of Loughrea had already each played two matches in the league which gave them a distinct edge in team experience. But both local teams improved all day and will have gained confidence from the day.

A dreadful start, trailing 0-4 from their own errors, was righted by a classic pass from Thomas McManus to Kian Gibbons to set up Garreth Higgins for a winner.

Higgins’ run of serves had the sides level at six. Again, when Drumshanbo fell from 12-12 to 12-19 behind, Higgins’ serve again bailed them out, helped by good Gibbons setting for Jordan Earley. Four aces from Callum O’Hagan Moore pushed Drumshanbo to set point but they let the set slip. Shocked by the turn around, they trailed most of the second set, except following a spike winner from Moore, Fergal Guihen, who set him, served Drumshanbo up to 17-19 from 12-19.

There was no sign of a resurrection when Drumshanbo meekly trailed Brigids early in this match 7-13 and 12-19. But then suddenly, inspired by new setter Cian Beirne, his opposite setter Kevin Moran banged down a winner and hit a run of serves. All players hit spikes as Drumshanbo won their first set at cadette against Brigids since 2009.

A sensational victory over the favourites looked possible when they led 8-5 in the second set but although it was close at 15-16 Drumshanbo surrendered tamely.

Early runs by Guihen and Higgins gave Drumshanbo a 5-3 lead and scores were level at 9, 10, 14 and, after Gibbons set Earley for a winning spike, at 16. Ripping serves from Moore, combined with outstanding defensive work from McManus the libero, saw Drumshanbo ahead at 22-21 but Brigids slipped by.

It looked so easy for Drumshanbo as a Gibbons run of serves pushed them from 2-2 to 8-2 and after aces from Earley, they led 14-7. But the tremendous defensive qualities of all Elphin teams then arrived and it took a great spike from Luke Tuite to seal the set.

After being level five times up to 12 the second set looked safe after a service run from Moran put Drumshanbo 23-18 ahead but the amazing Elphin passed them by.

Aces from Higgins and a massive service run from Beirne put the Leitrim school 20-10 ahead in the deciding set. Three serves from Kevin Lynch virtually sealed the game but when Aaron Keaveney made it only two of the starting six on court, the team wobbled before finally avenging last year’s shock defeat at the same stage.