Eanna flies the flag in Tallinn 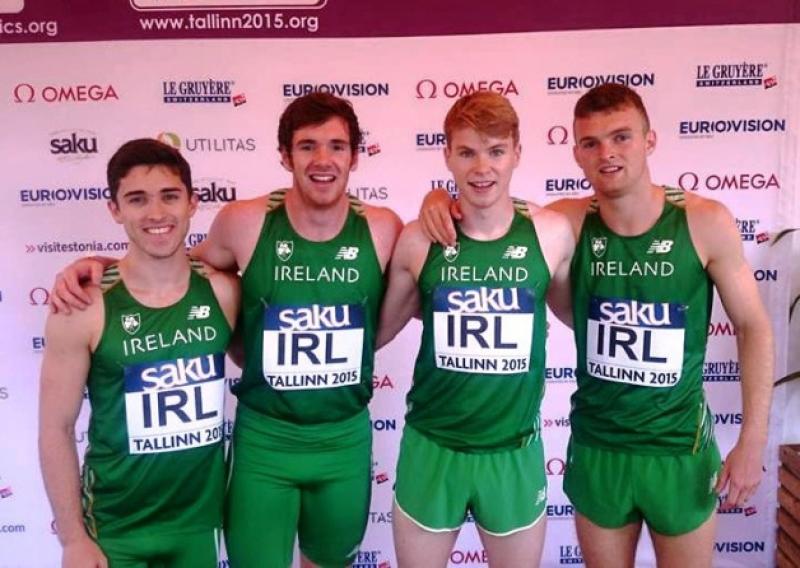 Congratulations to Eanna Madden who was part of the Irish 4 x 100m team who set another two Irish records at the European U23 Championships in Tallinn last Sunday.

Congratulations to Eanna Madden who was part of the Irish 4 x 100m team who set another two Irish records at the European U23 Championships in Tallinn last Sunday.

Eanna ran second leg in both events and I know there were a lot of club members glued to the online feed or the Eurosport coverage as they set a time of 40.11 in the heats and then smashed the 40 second barrier for the first time with an excellent 39.89 in the final.

Congratulations Eanna from everyone in the club, it was fantastic to see another Carrick AC athlete flying the flag for Ireland.

Gerard O’Donnell took a break from the hurdles at the Irish Milers Club races in Santry last Saturday and despite running into some very strong headwinds, he produced two excellent displays.

We had another very busy weekend at the Athletics Ireland Juvenile Championships in Tullamore. Our top placed performer was Tom McCabe who ran 66.41 seconds to finish fourth in the U18 400m Hurdles Finals on Sunday, a solid performance for Tom in his first season in the event.

Stephen McDermott was our next best placer in fifth in the U18 High Jump but was well below his best with.70m. One more successful clearance could have seen him claim the bronze medal.

The legacy of injury problems left Brian Finn below his best as he cleared 1.65m in the U17 High Jump and was very unlucky not at 1.70m, taking off the bar with his calf on three occasions.

Caitlin Surlis threw 9.37m to claim ninth in the U14 Shot while the big breakthrough of came in the U15 1,500m when Anna Corcoran slashed 20 seconds off her personal best when running a time of 5.28.67 to finish 17th.