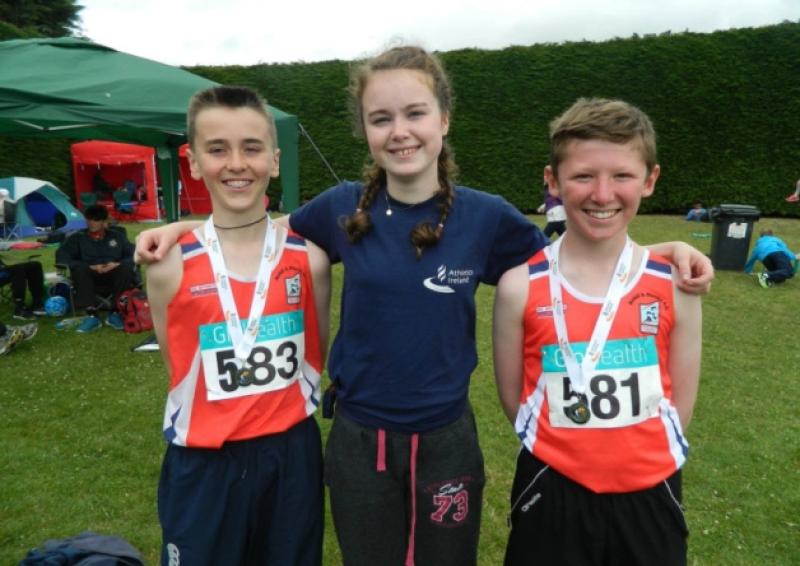 There were 18 Leitrim athletes competing last weekend in Tullamore at the final two days of the National Juvenile Championships. All the athletes had previously qualified for the national finals at the Connacht Track and Field Championships in Claremorris back in June.

Mohill AC’s race walkers Conor Mulligan and Eoin Gaffney both won silver medals at the national championships. In the U14 2k walk, Conor finished in 12.56.88 to finish in second place, while in the U15 2k Eoin also finished in second place, in a time of 10.58.44. In the U14 80m, Mohill’s Alannah McGuiness ran 11.04, missing out in a place in the final.

Carrick-on-Shannon AC had eight athletes competing at the national finals over the course of the weekend.

On Saturday Elise Bruen qualified for her first national final when she finished eighth in the U18 400m. Elise ran 61.80 in her heat and from lane one in the final, she ran 62.06 with a very strong run just over two hours later.

In the U17 high jump, Brian Finn didn’t have the best of days as he was desperately unlucky not to clear 1.70m, taking the bar off with the slightest touch of his calf twice. Christina Beirne ran 13.41 to finish eighth in the U18 100m final.

On Sunday, Tom McCabe was Carrick’s best placer with fourth place in the U18 400m hurdles in a time of 66.41 secs while Stephen McDermott was also just outside the medals in the U18 High Jump, clearing 1.70m, just one s jump from claiming a bronze.

Caitlin Surlis threw 9.73m to claim ninth in the U14 Shot while the big breakthrough of the day came in the U15 1,500m when Anna Corcoran slashed 20 seconds off her personal best when running a time of 5.28.67 to finish 17th.

Diarmuid Giblin was competing in both the U13 80m and Long Jump. He had strong performance in the 80m sprint, producing a PB of 11.44, and just getting run out of the qualifying positions in the final 20m. Diarmuid finished in 13th place in the long jump, with a jump of 3.73m.

Lara Mulvaney-Kelly threw a new PB in U13 Javelin, finishing in 9th position, just missing the final by one position. This was good progress for Lara who only took up the Javelin very recently.

Ella McDaid was also agonisingly close to making the final of the U13 Long Jump. She produced three solid jumps, the biggest being 4.14m. It was a very competitive competition and she needed to beat her PB to advance.

Likewise, Erin Somers was unable to reproduce her recent form, missing out on the final of the U12 60m sprint, running a time of 9.19. In his first national competition, Cormac Fahey finished 11th in the U13 Shot Putt.

On Sunday, North Leitrim AC’s Shannon O’Hagan and Kate Barrett were both competing U14 Shot Putt. Unfortunately Shannon picked up an arm injury in her first throw and was unable to produce any throws near her PB. However she was still able to finish tenth with a throw of 9.67m.

Kate Barrett was also down on her best but will be delighted to have competed in her first national championships. Kate had only been Shot Putting for two months so it has been remarkable what she has achieved.

Sibeal Reynolds from Ballinamore AC was competing in the U17 100m. Sibeal ran 13.34 but it wasn’t enough to qualify for the final.

Well done to all who represented the county so proudly over the past two weekends.