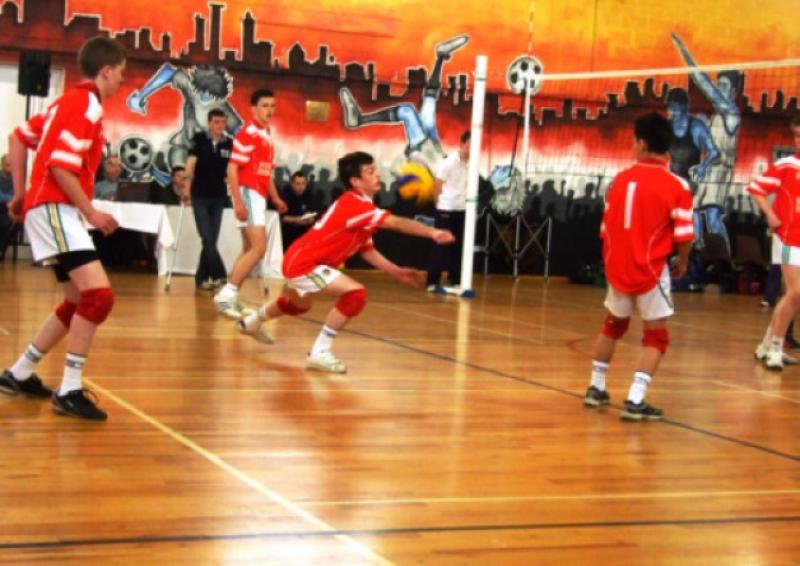 Another huge thrashing from St Brigid’s looked imminent when they strolled to victory in the first set in the Junior All Ireland volleyball held in Streete Westmeath last Thursday.

Another huge thrashing from St Brigid’s looked imminent when they strolled to victory in the first set in the Junior All Ireland volleyball held in Streete Westmeath last Thursday.

But instead of dropping their heads, Drumshanbo continued to play and were rewarded a return to form in the second set. There they astonished the neutrals, but not themselves, by making the same Brigid’s six look very mortal for almost all the second set.

However, just as Drumshanbo looked certain to take the set at 24-20, Brigid’s recovered just enough. Every one of the last six points were hotly contested but second set victory was snapped out of reach.

The start was not expected as Drumshanbo had beaten Loughrea in a first set in their early season meeting. It was Loughrea, with some relentless serving, flew into a 0-7 lead before Drumshanbo could register their first point through a Caleb Duffy winner.

That didn’t stop Loughrea’s faultless flow and even with superb net play from Sunbeam Feng and two well placed winners from Callum O’Hagan Moore, Drumshanbo still found themselves in a seven point deficit at 4-11.

Lucas Da Silva and the consistent Kevin Moran combined well and quickly followed by great serving from Da Silva, Drumshanbo found themselves closing the gap to 8-14.

However Loughrea managed to hit a scorching run of serves and, despite resistance from Duffy, managed to close out the set easily.

The second set saw the introduction of Jacek Ozdobinski who brought with him a new Drumshanbo side. In stark contrast to the first set, the rallies were long and both teams fought for every point.

Loughrea ran into a quick lead but Drumshanbo fought back to take the lead through a run of 6 serves from Da Silva. Suddenly Drumshanbo were playing with a spark of confidence that was absent in the first set.

Ozdobinski, Moran and Fergal Guihen all hit winners to put the champions under pressure, Duffy hit back to back winners followed by an ace to help his team into a 16-12 lead.

Moran and Sunbeam Feng used their chemistry at the net to keep their team in the lead while Guihen was pouncing on loose balls in the back court to give Drumshanbo the advantage at 19-18. Great reactions from Ozdobinski and an alert Da Silva gave Drumshanbo the push they needed to take a 23-19 lead where the set looked assured; but just as victory was within their grasp Loughrea again regained their serving momentum to tie the game at 24-24.

It was unfortunate how Drumshanbo lost in the cruellest of fashion, with the decisive ball landing on the top of the net and to the ground, to the horrified look of a scrambling Ozdobinski.

As happened in another comeback 10 years before in a Junior Final there was confusion among the officials which denied Drumshanbo a legitimate time-out at match point but overall the match was very well conducted by referee Trish Grehan.

Drumshanbo can be proud of their performance, they truly rattled what had looked a superb Brigid’s team in the first set and can look forward next year’s season with confidence.