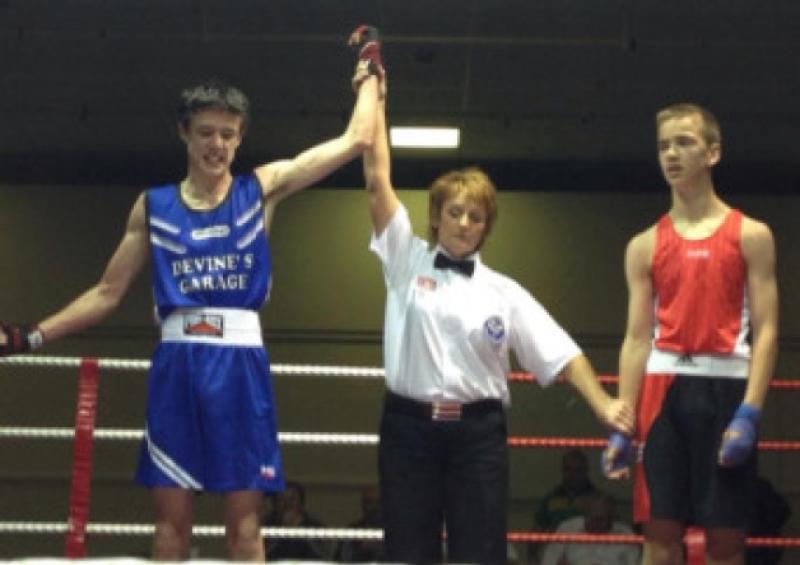 Ballinamore Boxing Club’s Mark Stringer made his own slice of history when he became the first fighter from the club to win an All-Ireland title last weekend.

Ballinamore Boxing Club’s Mark Stringer made his own slice of history when he became the first fighter from the club to win an All-Ireland title last weekend.

Mark, from Aughawillan, is pictured above as the result is announced and is the club’s first ever All Ireland Champion after he came through an extremely testing and tough three fights over five days.

Mark first took on Peter Keenan from Darndale BC on Tuesday week last in the quarter finals. It turned out to be a very close contest with Mark coming out on top with a 2-1 verdict.

The Ballinamore boxer was back in the ring again on Thursday for the Semi Final fighting Shane Gillespie from Bundoran.

This was a tough fight for Mark as he had fought Shane twice before, one of which was the All Ireland Semi Final last year. Mark used his experience from last year as he qualified for the Final, again on a 2-1 scoreline.

Saturday’s Finals saw Mark step into the ring around 11:30 against James Drennan from Paulstown. Nerves and excitement were high in the corner with this being the first time for Ballinamore BC to have someone in an All Ireland Final.

From the second the bell sounded, both fighters went toe to toe in a great contest, showing all their skills and determination. It was excellent display of boxing from both fighters but Mark, showing his experience in the ring was in control of the fight and out-boxed Drennan for the three rounds, taking home the title on a 3-0 scoreline.

Mark received a welcome home on Sunday to mark an incredible achievement for both Mark and Ballinamore Boxing Club.