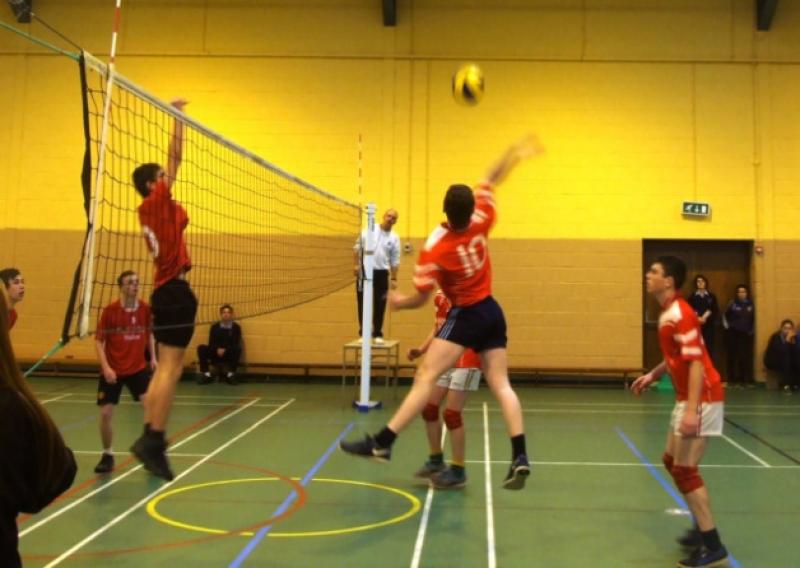 The Leitrim school defeated the current Junior A & Cadette A champions, avenging a qualifier loss to the same team in the senior A semi-final. It was a game full of suspense. It could have gone either way and Drumshanbo were fortunate to defeat such a determined opponents

Early’s serves pushed the lead to 11-6 and with another McCormack run they were 8 points ahead ay 19-11.

But Mallow as expected came back and cut the lead to one at the very end. Then as Mallow spiked another blistering hit they were met by a spectacular block from Owen Dolan.

In the second set set Drumshanbo continued to prove their dominance with a strong back line and an aggressive attack. Jacek Ozdobinski and Alan McTigue hitting spike after spike. At 6-6 Owen Dolan serves took over to 13-6, and this cushion was enough to withstand the expected comeback which saw scores level at 22 and 23.

For the third and final set there was no way to call it Drumshanbo and Mallow where fighting for any and every point, Mallow drew level time after time until Dolan’s serve again opened up the gap going from 12-11 to 17-11.

Moran hit a classic winner follow by great block from McCormack. Mallow again edged back to draw level at 22 and 24. McCormack had now service and sent the two closing points over the net to a victory that was hard won but well deserved. The game was over an hour and a half long.

Drumshanbo now go forward to the All-Ireland final on Monday December 1, against their old rivals Brigids Loughrea. Brigid’s will be hot favourite but then so were Mallow! This will surely make for an exciting contest.