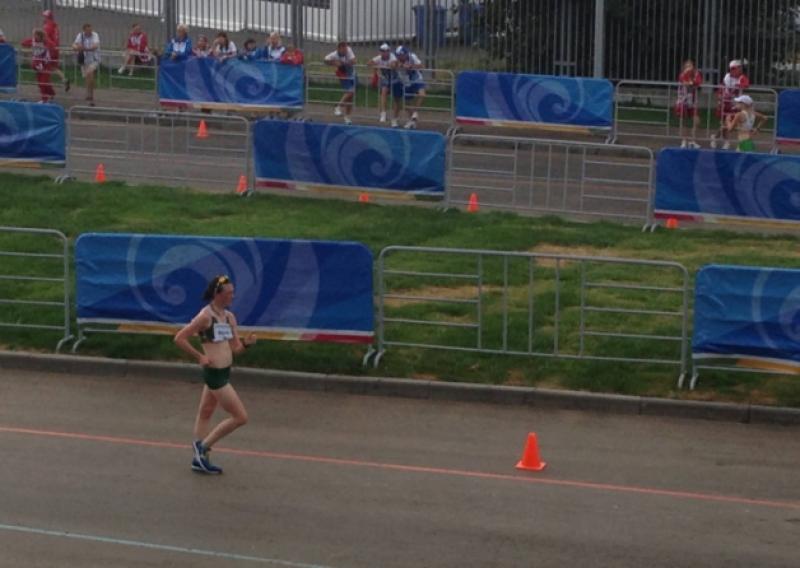 Eslin’s Laura Reynolds finished a brilliant sixth in the Women’s 20Km Walk at the World Student Games this morning in Kazan, Russia.

Eslin’s Laura Reynolds finished a brilliant sixth in the Women’s 20Km Walk at the World Student Games this morning in Kazan, Russia.

The Mohill & District AC member clocked a time of 1.33.31 for sixth place in the demanding walk which saw three Russians fill the medal positions.

Laura was in fifth position with one kilometre to go but China’s Mingxia Yang finished very strongly to overtake the Leitrim walker to take fifth.

Coach and fellow Olympian Colin Griffin was at the race in Kazan with Laura and he tweeted after the race “6th place for @LauraReynolds89 in 20km walk this morning in 1.33.31. She raced very well and was in 5th with 1k to go.”

Colin later added “Not helped by sore throat and head cold since yesterday so she held it together very well. Russian clean sweep.”

Laura went through the halfway stage in a time of 46 mins 41 seconds and showed great strength in the heat over the second half of the race as she covered her second 10K in 46.50, just nine seconds slower than the first half of the race. The time of 1:33:31 was also a season’s best.