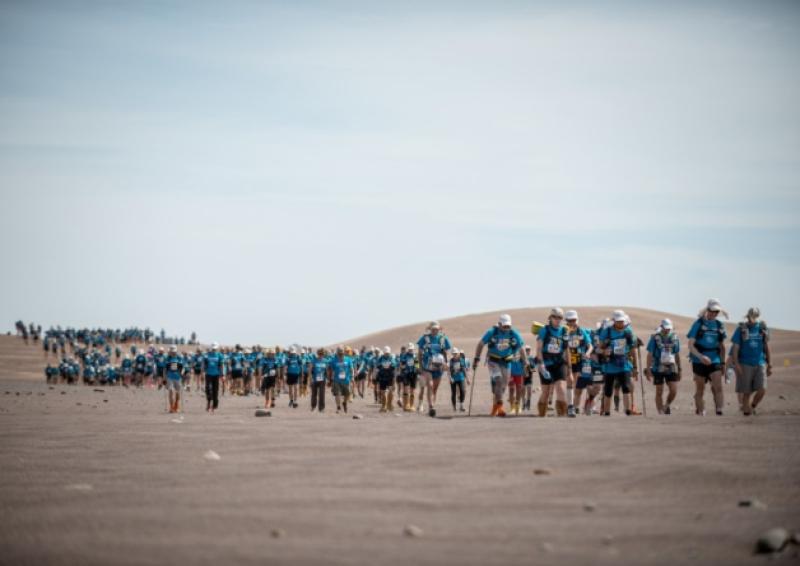 The thought of running the equivalent of six marathons (250km) in six days is a frightening prospect for any normal thinking person but David Downes is about to embark on a gruelling challenge where he will do just that.

The thought of running the equivalent of six marathons (250km) in six days is a frightening prospect for any normal thinking person but David Downes is about to embark on a gruelling challenge where he will do just that.

Of course, these are not your average marathons, they will be run in the Moroccan desert, where temperatures routinely exceed 50 degrees.

The Marathon Des Sables is widely regarded as the world’s most extreme form of endurance running and while many would run a mile to avoid such an event, David, who lives in Dromahair said, “It has always been my dream race.”

A quick glance at David’s cv reveals an individual with a drive to compete in and complete the most arduous events imaginable.

As well as completing marathons all over the world David has also participated in the 2013 Race Round Ireland, in which a four person team cycles 1,350 cycle miles around Ireland in four days and last year he was part of an eight man team that took part in the Sionnach Relay run in Sligo - a 266km relay run over approximately 24 hours.

Of all the events the former Dromahair GAA team manager was competed in David points to the 2012 Enduroma Double Ironman in Bournemouth as the toughest. That race consisted of a five mile swim, a 230 cycle and then a 52 mile run.

Some may find it surprising that there is quite a lot of people eager to compete in the Marathon Des Sables. In fact online registration for the event was open for just one minute such was the demand amongst endurance runners eager to participate in the most difficult of conditions.

Reflecting on his successful bid to take part in this year’s event David said, “It’s just the luck of the draw to get in, you have to be quick on the ball. Being mad is helpful!”

Even though he has such a pedigree for competing in the world of endurance events, David knows the challenges that lie in store for him and he is travelling to Morocco with one aim - to finish.

“My only goal is to finish, put one foot in front of the other and keep going.”

Outlining some of the difficulties he will face in the desert David explained, “You have to be totally self-sufficient except for the water stations and the tent that is provided at night. If you don’t have it, you don’t have it.”

Carrying his daily rations and supplies on his back is something David has to prepare for as he trains for this gruelling event but it is something he is very much taking in his stride.

“I’m training with 6kg on me, you have to adapt and train. After a few minutes you get into a routine.”

Living in North Leitrim may not be ideal in terms of preparing for the sweltering heat he will encounter in the Sahara Desert but apart from the difference in temperature he feels very fortunate to be located in an area ideal for long distance training.

“Where we live is brilliant for training. We have Union Wood, Slish Wood and Newtownmanor close by. I run the Sligo Way from Union Wood to Dromahair and back and that is 20 miles. It’s fantastic I’m blessed with the facilities.

Speaking a few weeks before his departure for the event which runs from April 3-13 with the competitive action taking place between April 5-10, David spoke about the level of training he is doing in order to be in the best physical shape.

“I am training six days a week and I was averaging 70 miles until recently and that is dropping as it gets closer to the event.”

Two things David will see plenty of in Morocco - sun and sand - may not be readily available in Dromahair but he has devised a way to plan for the North African elements.

In terms of acclimatising to running in sand, David has been taking to the sand dunes in Cullenamore, where he trains regularly while he has also been climbing hills such as Knocknarea as part of his ongoing training.

In such difficult conditions it is hardly surprising that there are drop-outs with an average completion rate of about 60% for the race. David is confident that he will be among the finishers and having spoken to two people who have successfully completed the event, they believe David’s cv is strong enough to ensure he is among this year’s finishers.

David is raising much needed funds for the North West Hospice and you can support him by donating at www.mycharity.ie/event/getdownesytothedesert/..