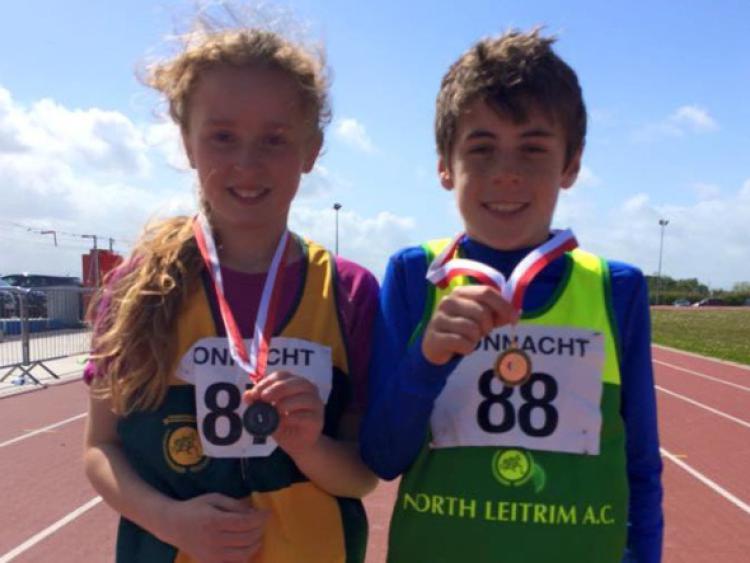 There was athletics action in Claremorris last weekend when the Western Region U9 to 11 Team Competition and U12 Individual events was held at the newly refurbished Mayo venue.

There was athletics action in Claremorris last weekend when the Western Region U9 to 11 Team Competition and U12 Individual events was held at the newly refurbished Mayo venue.

Despite the horrible weather throughout the day, and a wind that was recorded at over ten metres per second on the backstraight, Claremorris AC did a fantastic job in hosting the event.

The under 9, 10 and 11s had qualified from the County Championships held in Manorhamilton a few weeks back and operated in pairs with the event decided on the aggregate performance.

The Carrick on Shannon AC pairing of Gerard Murtagh and Dhani Keane had a fabulous day, winning silver in the U11 Long Jump and a bronze in the 60m, a great achievement for all these young lads.

Their aggregate distance in the long jump was 6.78m. The winning pair in the boys U11 long jump were from Craughwell (6.94), while in third place was a team from Claremorris (6.77).

The Carrick pairing of Dara Holmes and Diarmuid O’Connell just missed out on a medal in the U10 turbo javelin, finishing in fourth place with a combined throw of 22.54m.

A number of other county teams were close to the top positions but did not make it into the first three who qualify for the All Ireland in Tullamore on 27 June.

In the U12 individual competitions, Leitrim had a three medal winners. North Leitrim AC’s Patrick Montgomery won gold in the boys U12 600m race in a time of 1.52.37, while Carrick on Shannon’s Jack Casey finished just behind him to claim the silver in 1.53.49.

Erica Greene of North Leitrim AC was third in the girls U12 turbo javelin, with a throw of 19.06m. The event was won by Maggie Chambers of Westport AC with 20.97m.

North Leitrim AC athlete Erin Somers just missed out on a bronze medal in the U12 60m event, finishing in fourth place in a time of 9.02.

Patrick Montgomery, Jack Casey, Erica Greene and Erin Somers all qualify for the All Ireland finals in Tullamore on Saturday, July 4.

In the relays, Carrick on Shannon U11 Boys relay team finished fourth overall.

• The Connacht Under 13 to Under 19 as well as the Senior Championships will be held in Claremorris on Saturday next and a number of Leitrim athletes from all five clubs will be taking part. The qualifiers from these will take part in the All Ireland in Tullamore the first and second weekend of July.